Kerry in Pakistan to Shore Up Counterterror Cooperation 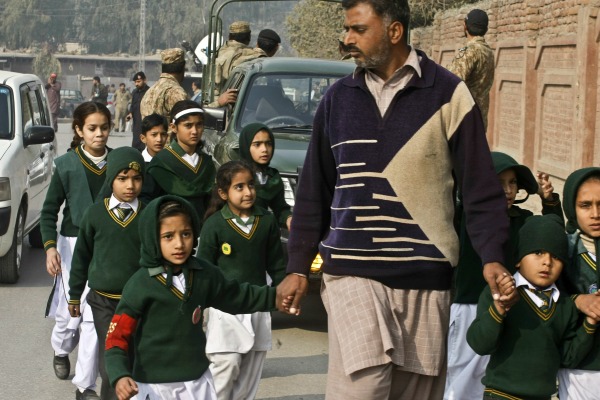 U.S. Secretary of State John Kerry arrived in Pakistan on Monday to press the country's leadership to step up the fight against extremists and eliminate safe havens for terror groups along the Afghan border.

He was welcomed by Pakistan's foreign affairs Sartaj Aziz and headed directly into meetings with Pakistani Prime Minister Nawaz Sharif. Kerry is making the case for more robust efforts against all extremist groups in the country, particularly after last month's devastating Taliban attack on a Peshawar school that killed 150 people, most of them children.

Pakistan has boosted operations against violent extremists in its recent months, notably following the Peshawar attack that stunned the nation. But U.S. officials traveling with Kerry said Washington wants to ensure that there is a "real and sustained effort" to limit the abilities of the Pakistani and Afghan Taliban, the Haqqani Network and Laskhar e Tayyiba, which pose direct threats to Afghanistan, Pakistan and India, as well as to American interests.

Aziz hinted that Kerry might go to Peshawar on Tuesday to pay his respects to the victims, saying it would be a nice gesture, but the State Department declined to comment on Kerry's plans.

Underscoring the importance of the security aspect of Kerry's trip, he was being joined in his meetings with Gen. Lloyd Austin, the chief of the U.S. Central Command, which oversees U.S. military operations in the Middle East and South Asia.

Pakistan has been on edge ever since the Dec. 16 attack on the Peshawar school that was claimed by the Pakistani Taliban as retaliation for an army operation launched in June in the North Waziristan tribal area. In response, Pakistan has boosted operations in the rugged tribal areas, reinstituted the death penalty for terrorists and moved to try civilian terror suspects in military courts.

The extremists, however, have vowed to keep up attacks and just on Friday, a suicide bomber blew himself up outside a mosque in Rawalpindi, next to Islamabad, killing five people.

Pakistan faces numerous obstacles in combatting extremism, not least from networks of hardline Islamist seminaries and religious schools that promote radical ideology, and a flawed judicial system that has been criticized for an inability to prosecute and convict terror suspects. India reacted sharply last month when an anti-terrorism court granted bail to the chief defendant on trial for the 2008 attack that killed 166 people in the Indian city of Mumbai due to lack of evidence. The suspect has since been rearrested.

Still, Pakistan has long been accused of playing a double game when it comes to dealing with militancy - fostering some militant groups that operate in Afghanistan and India as a way of maintaining influence there, while pursuing other militants who target the Pakistani state.

In June, when the military launched its operation in North Waziristan, it vowed it would go after all militants. Doubts remain, though, about how aggressively the army has pursued groups like the Afghan Taliban or the Haqqani network, which the U.S. says is responsible for numerous attacks in Afghanistan.

In his meetings, the officials said Kerry would also be making the case for improved trade and commercial ties between Pakistan and Afghanistan and a cooling of tensions with India that have flared in recent weeks with firefights along the border with the disputed Kashmir region.

Pakistan and Afghanistan, wary neighbors, have also seen an improvement of ties in recent months with the launch of the North Waziristan operation and the election of Pres. Ashraf Ghani, something Washington is likely hoping will continue as it reduces its military presence in Afghanistan.