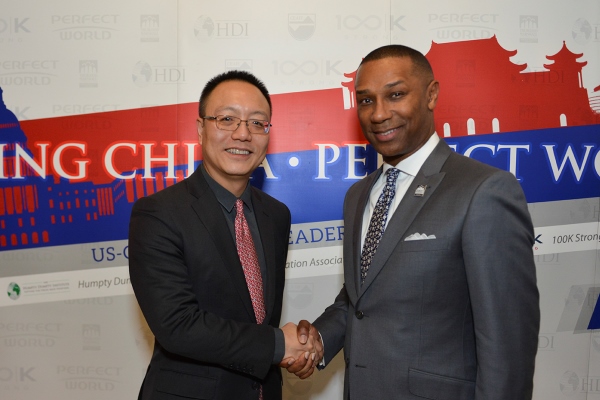 WASHINGTON (NNPA) – In an effort to develop the next generation of global leaders, the Thurgood Marshall College Fund, joined, Perfect World, the China Education  Association for International Exchange (CEAIE) and domestic groups focused on building ties between the United States and China to embark on a new student exchange program.

Perfect World, an online gaming company, will assist in funding the fellowship initiative, which is open to all educational disciplines and industries, through 2025.

Johnny Taylor, president and CEO of the Thurgood Marshall College Fund, a group that advocates for nearly 300,000 students through a network that includes publicly-supported Historically Black Colleges and Universities (HBCUs), said that after meeting with world leaders in the public and private sector, he found Perfect World to be the perfect partner, because not only were they interested in entry-level opportunities for HBCU students, but they were also looking for mid-tier professionals, as well.

Taylor said that the exchange isn’t just about number-crunchers and programmers, but it also about graphic designers and artists.

Taylor noted that people limit science, technology, engineering and math (STEM) professions very much, but in reality everyone interacts with STEM every day.

“Everything that we do is about STEM,” said Taylor.

Robert Xiao, the CEO of Perfect World, said through conversations with Taylor, he discovered that they shared a similar vision and a grand goal of changing people in the United States and in China.

“We know a lot of young professionals need to not only grasp the technology part and the art part, but also the culture part,” said Xiao. “You gotta go abroad, you gotta be able talk to different people, you have to understand other nations and other cultures deeper.”

Xiao added that not only will Perfect World benefit from these types of exchanges, but the industry will benefit as well.

The Perfect World CEO said that he wants to expose Black college students to the “the beautiful business from China” while giving Chinese students a modern piece of America and a deeper understanding of the community.

Xiao continued: “That’s what we call an “’exchange.’”

According to the International Monetary Fund, China recently surpassed the United States as the world’s largest economy. Taylor said that it would be senseless not to have relationships with the Chinese, especially with what he called a ‘Chinese American company.’ Perfect World is publicly traded on the NASDAQ stock exchange.

During a ceremony on Capitol Hill to announce the fellowship program, Hao Ping, the vice minister of education in the Ministry of Education in China, noted that Chinese President Xi Jinping explained that in 1978, during early student exchange efforts, 52 Chinese students were sent to study in the U.S. and eight American students traveled to China. Hao called the exchange “a landmark event in the establishment of China-U.S. diplomatic relations.”

By 2013, more than 400,000 Chinese students were studying in the U.S. and thanks to the 100,000 Strong Initiative, a group that promotes Mandarin language learning and study abroad, Hao said that more that 100,000 American students have the chance to study in China.

The announcement about the Zhi-Xing China – Perfect World U.S.-China Young Leaders Fellowship program follows the launch of a collaboration between HBCUs and the CEAIE, that will provide 1,000 scholarship awards to HBCU students.

David Wilson, the president of Morgan State University in Baltimore, led a delegation of HBCU officials on the trip to Beijing where the memorandum of understanding was signed between the schools and the Chinese government last July.

Even though the eligibility requirements and selection process for the Zhi-Xing China—Perfect World U.S.-China Young Leaders Fellowships still needs to be finalized, officials with the Thurgood Marshall College Fund said that students will begin traveling to China for the exchange program in July 2015.

Taylor said that the world is huge and that the most important thing that HBCU students need to know about the program is that opportunities exist not only in the U.S., but also around the world.

“Our students can’t be limited by the job market in the U.S.,” added Taylor. “They have to think globally. Our community has to get on board.”