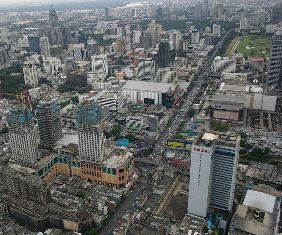 BANGKOK (AP) -- Residents of Bangkok braced for possible weekend flooding as the runoff from high water that devastated parts of central Thailand flowed toward the low-lying metropolis, where many downtown buildings were fortified with walls of sandbags.

While the government sought to reassure Bangkok's 9 million people that the capital would be spared, it also sent sometimes confusing messages that raised anxieties and sent residents on shopping sprees to stockpile food, medicine and other essentials.

The worst floods in a half-century have submerged entire towns across Thailand's central plains, devastating rice crops and halting hundreds of factories. Some 8.2 million people in 61 of Thailand's 77 provinces have been affected by the flooding, which has killed 283 people since July.

Authorities have been warning that water rushing from the north could combine with rain and high tides to flood the capital. Some have said the flow would be so strong that authorities would be left with little choice but to watch the city drown.

The government said much of Bangkok lies behind a sturdy system of flood walls, dams and dikes that have been reinforced recently.

"I insist that the floods will only affect outer Bangkok and will not be widespread in other areas," Prime Minister Yingluck Shinawatra said Friday.

Yingluck visited a key part of Bangkok's defenses just north of the city in Rangsit. There, military personnel and hundreds of volunteers stacked thousands of white sandbags along a canal gushing with runoff from the central plains to the north.

Volunteer Troy Pannavaj said authorities were trying to pump as much water as possible into the Chao Phraya River - which snakes through the capital and into the sea - before high tides or heavy rains over the weekend slow the outflow. "If these barriers break," Pannavaj said, "this water will rush through Bangkok very fast."

"If the water comes, I'll have to let it happen. There's no way I can block it. For me, I'll move to an upper floor," she said. "I feel sorry for the people in lower-lying areas."

When soldiers were deployed to set up a new barrier in the middle of a main road in the town center, scuffles broke out between troops and angry residents who wanted to let the water run toward Bangkok, said Wasan Leekmeg, a local politician.

Some residents tried to remove the sandbags fortifying the wall. The barrier was eventually swamped, and "the soldiers gave up trying to protect it and started evacuating people," Wasan said.

"The problem is, the water keeps rising, and nobody knows how bad it's going to get," said Wasan, who spent the last few days ferrying supplies to desperate businesses and families on a wooden canoe - one of the only reliable ways to navigate the town.

Erroneous reports Thursday said high water had broken through a key flood gate in Pathum Thani, leading one government minister to order residents to evacuate. The government later apologized for the "misinformation," saying the evacuation order had been reversed and that damage to the gate had been overestimated.

The conflicting information left many Bangkok residents confused over whether their neighborhoods were at risk. Many have stocked up on bottled water, rice, instant noodles, medicine and other essentials, leading to shortages. Others have moved their cars to higher ground in parking garages in the city's malls.

Yingluck said her government would change how it informed the public and that official information would only be released by the director of the Flood Relief Center.

Buildings in many areas of the capital have stockpiled sandbags, while others have built protective walls from cement and cinderblocks. The city's subway system was rushing to install steel flood barriers.

"To be frank, I don't really know what's going to happen to Bangkok," said 26-year-old Kuealapat Atsawasiramanee, whose family home is about a half-mile (a kilometer) from the Chao Phraya River. "Is it going to be flooded or not? I'm not really sure. There are many pieces of information and news out there and I just don't know what to believe."

"If it's going to flood, the government simply needs to say so. Don't conceal the truth, because that will only lead to more panic."

A Japanese trade organization criticized the Thai government for allegedly failing to provide timely and accurate information about the situation in the central province of Ayutthaya, where hundreds of factories have been devastated.

Seiya Sukegawa of the Japan External Trade Organization Thailand said much of the information released by the government before floods hit the area was late, contradictory or difficult to understand because it was not in English.

"Japanese companies didn't know what was happening or which information was true or not," he said. "They received warnings but not enough information and not enough time to decide the next step."

He said more than 300 Japanese-owned factories - including electronics makers and automotive parts suppliers - were damaged or destroyed, adding that the Thai government was doing nothing to help companies reach sites to salvage undamaged property.

About 100 elephants in Ayutthaya were moved to higher ground and face food shortages as well as possible foot diseases because of the wet conditions, officials said.

Chusit Apirumanekul, a hydrologist at the Asian Disaster Preparedness Center, sympathized with the difficulties facing the government, saying the floods were unpredictable.

"I think this is quite normal in every country when you have this kind of warning, forecasting, you cannot say that it will happen or it will not happen 100 percent," he said.