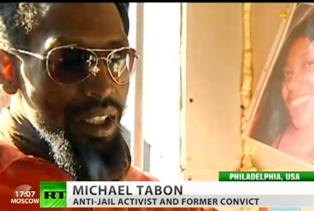 PHILADELPHIA (AP) - Ex-convict Michael Ta'Bon is back in a prison of his own making. Literally.
Ta'Bon, who served nearly a decade behind bars for armed robbery, says divine inspiration has led him to preach a gospel of nonviolence from a homemade, outdoor jail cell in Philadelphia.
He has been living in the cell since Feb. 1 and plans to stay there throughout the month of February. The Skanner News Video

"Instead of the young bucks going to jail to find out for themselves, I'm bringing the jail to the young bucks," Ta'Bon said.
The gray structure, which took about 30 hours to build, is made of plywood and wallboard and sits in a vacant lot in the Nicetown-Tioga neighborhood. The cell has some furnishings and uses a generator for heat and electricity.
On a bitterly cold morning this week, Ta'Bon could be heard telling four high school students about the 19-cent hourly wage earned by prisoners, which might help them buy a 24-cent cup of instant noodles in the commissary.
Ta'Bon breaks into rhyme at one point, warning the boys to learn from his mistakes. He ends with a phrase that he makes the students repeat: "Jail is for suckers."
The teens, who attend an alternative school for at-risk youth, were brought to the site by a city police officer. Ta'Bon's message seemed to hit the mark.
"He was speaking life," said sophomore Brandon Jiles, 16. "He made me think twice."
Ta'Bon, 36, wears an orange jumpsuit and unshackled handcuffs. He said the time not spent talking to visitors is used to write a book inspired by the letter that Martin Luther King Jr. wrote from jail in Birmingham, Ala. He's also writing music.
"I really feel like I'm doing time right now," he said. "I'm looking at cars drive past, people going to restaurants. I can't move. I'm not free."
He does have a few amenities that he did not have during his time at the state prison in Albion, Pa. - namely a laptop and cell phone. But he still has copies of the prison's rules, which he shows to anyone who doubts what life is like in stir.
He has a cot and blankets, and his wife and friends deliver food. When nature calls, he uses a portable toilet across the street. The fickle heat in his cell makes February's often subzero temperatures seem even colder. He said he chose the month to represent life's struggles and in part to coincide with Black History Month. Most of Philadelphia's homicide victims are black, though Ta'Bon noted that "bullets and jails don't care what color you are."
Ta'Bon said he has permission from the owner of the vacant lot and hopes that the few questions he's received about city permits will fall by the wayside. Because he needs no reminder of what's at stake: Ta'Bon built the cell underneath a huge mural bearing the names of the city's murder victims in 2006 - all 406 of them.
Nicole Williams, 41, of Philadelphia stopped by to lend her support.
"It's a positive message," she said, "and the children need this."