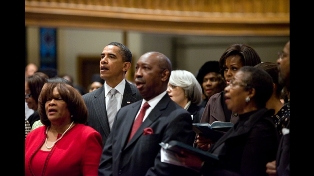 ATLANTA (AP) -- The Rev. Martin Luther King Jr.'s legacy as a preacher of peace and tolerance was lauded Monday as Americans marked his memorial day just over a week after the shootings in Arizona that killed 6 people and seriously wounded a congresswoman.

Attorney General Eric Holder, speaking at King's former church in Atlanta, praised him as ``our nation's greatest drum major of peace'' and said the Jan. 8 bloodshed was a call to recommit to King's values of nonviolence, tolerance, compassion and justice.

``Last week a senseless rampage in Tucson reminded us that more than 40 years after Dr. King's own tragic death, our struggle to eradicate violence and to promote peace goes on,'' Holder said.

President Barack Obama, in Washington, said part of King's legacy was about service and urged Americans to get out into their communities -- a step he suggested would have special meaning following the shootings.

``After a painful week where so many of us were focused on the tragedy, it's good for us to remind ourselves of what this country is all about,'' he told reporters as he and first lady Michelle Obama took part in a painting project at a school on Capitol Hill.

National and local politicians joined members of the King family at Ebenezer Baptist Church in Atlanta to mark what would have been the civil rights icon's 82nd birthday. Members of the King family also laid a wreath at the tombs of King and his widow, Coretta Scott King, on the 25th anniversary of the federal holiday established to honor the 1964 Nobel Peace Prize winner.

Rep. John Lewis of Georgia, who worked with King during the civil rights movement, issued a renewed call for Americans to unite in peace and love as King preached during his lifetime.

``If Dr. King could speak to us today, he would tell us that it does not matter how much we disapprove of another persons point of view, there is never a reason to deny another human being the respect he or she deserves,'' Lewis said.

The Rev. Raphael Warnock, pastor of Ebenezer, called for members of Congress to show solidarity during the State of the Union Address this month. Quoting the Bible and Abraham Lincoln, Warnock said, ``A house divided against itself cannot stand.''

``Maybe after Arizona what our children need to see is us sitting together,'' Warnock said.

In Philadelphia, hundreds of volunteers including Mayor Michael Nutter helped refurbish computers for needy residents as part of the city's ``day of service'' events to mark the King holiday.

``The computer is your passport, not only to the future but to knowing what's going around you,'' Nutter said. The effort was part of the $25 million federally funded Freedom Rings Partnership, which aims to deliver 5,000 computers over the next few years to people in the city, where 41 percent of residents lack Internet access.

Coloradans marked the day with marches and parades in Denver and Greeley, and the National Western Stock Show was set to host its annual Martin Luther King Jr. African-American Heritage Rodeo on Monday evening.

In Maine, Gov. Paul LePage changed plans and attended a memorial breakfast just days after saying critics of his decision to skip other King events could ``kiss my butt.''

LePage attended the breakfast in Waterville on Monday, just as he had done for several years as the city's mayor before being elected governor. His appearance was scheduled after he responded Friday to critics of his decision not to attend the state NAACP's annual holiday celebrations. His ``kiss my butt'' comment drew harsh criticism from state and national leaders of the National Association for the Advancement of Colored People.

King is the only American who was not a U.S. president to have a federal holiday named in his honor. He has been recognized on the third Monday in January since 1986.