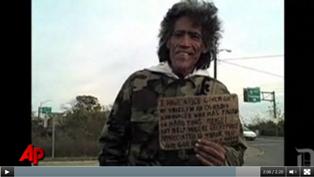 CLEVELAND – With a deep, refined voice, Ted Williams simply asked for help to get off the streets. He's been heard – but his new career hit a snag Wednesday afternoon when Williams was turned away from a flight to New York because of "improper identification."

Left homeless after his life and career were ruined by drugs and alcohol, Williams has been offered a job by the NBA's Cleveland Cavaliers and is being pursued by NFL Films for possible work. He and his compelling tale became an online sensation after The Columbus Dispatch posted a clip of Williams demonstrating his voiceover skills by the side of the road.

Supporters hope he'll be able to get the necessary paperwork at the Cleveland, Ohio courthouse where he was stuck trying to get a copy of his birth certificate, TMZ reported – otherwise his scheduled television interviews in the Big Apple will have to be rescheduled.

"This has been totally, totally amazing," Williams said in a phone interview with The Associated Press on Wednesday, his voice choking with emotion. "I'm just so thankful. God has blessed me so deeply. I'm getting a second chance. Amazing."

Williams was contacted Wednesday by the Cavaliers, who have offered him a position that could include announcing work at Quicken Loans Arena, the team's downtown arena. Williams said the team has offered him a two-year contract and said they would pay his living expenses.

"I can't believe what's going on," said Williams, a father of nine, adding he feels like Susan Boyle, the Scottish singing sensation who became an overnight star. "God gave me a million-dollar voice, and I just hope I can do right by him."

Cavaliers spokesman Tad Carper said exact details of the team's offer and their plans to help Williams with housing were still being worked out.

The Cavaliers did not know much about him, but were touched by Williams' ordeal.

"When you know something's right, you just have to launch," said Tracy Marek, the team's senior vice president of marketing. "One of the big things that we talk about here, with our organization, is how important urgency is — when you see something that feels good and seems right. The important thing that we wanted to do is to let Ted know that we have something here for him."

The 53-year-old Williams planned to fly to New York later Wednesday to see his 90-year-old mother, who lives in Brooklyn and has stood by him during his battles with addiction.

"She has always been my best friend," he said, crying. "When I was a kid, she would take me down to Radio City Music Hall and on the subway. I'm just glad that she is still around. I prayed that she would live long enough that I could make her proud and see could her son do something other than stand along the side of the road with a sign asking for money."

An instant celebrity, Williams is scheduled to appear Thursday on NBC's "Today," and he most certainly will be sought for other interviews.

It's been a whirlwind for the golden-voiced man, who was recently living in a tent and whose past includes a lengthy list of arrests. He has served time in prison for theft and forgery and has been cited with numerous misdemeanors, including drug abuse.

Julia Williams is thrilled her only child is turning his life around, and she can't wait to see him.

"This will be my day to see my son get up and do something to help himself," she said. "He has so much talent. I hope this will be the thing for him. He came from a nice family. And then he went poor, poor. So, maybe this will build him up and let him see that there's more in life than hanging around with the wrong people, and taking drugs."

Williams said his life began spiraling downward in 1996 when he began drinking alcohol "pretty bad." He used marijuana and cocaine and lost interest in his radio career. He eventually wound up on the streets, despite the best efforts of his children, seven daughters and two sons who all live in the Columbus area.

"They have mixed emotions about what is going on," Williams said. "During my detox stages, I had a tendency to eat up everybody's food. I'm a grandfather, too, and I was eating what should have gone to their kids."

Williams said he celebrated two years of sobriety "around Thanksgiving. I just hope everyone will pray for me."

Williams initially was spotted by the Columbus newspaper standing near an exit ramp off Interstate 71. In a video interview that quickly became wildly popular, Williams — holding a cardboard sign that asked motorists for help and says, "I'm an ex-radio announcer who has fallen on hard times" — explained in his smooth, bottomless voice that he was drawn to radio at the age of 14.

When he first heard Williams' beautiful, bottomless voice, Kevin McLoughlin of NFL Films, which has chronicled pro football for nearly 50 years, knew he had to contact the unknown man.

"It's that voice," said McLoughlin, director of post-production films for the NFL told AP. "When he was telling his story, I said, 'That's what we do. This guy can tell a story.' Somehow, some way, I need to get a demo with him. He could be that diamond in the rough."

McLoughlin has not been able to contact Williams, but he intends to track him down.

"The man deserves a second chance," he said.

Warren Levinson in New York contributed to this report.