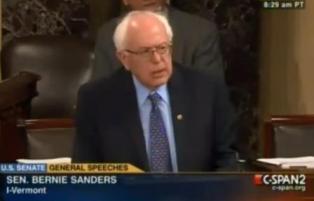 Negotiators worked on a deal Thursday that would extend expiring tax cuts for everyone even as House Democrats moved toward a vote to show their commitment to letting taxes on the wealthy go up. The Skanner News Video: Bernie Sanders rabble rousing speech

The House bill is a political maneuver to satisfy Democratic supporters who oppose extending tax cuts for the wealthy. The bill narrowly survived a procedural vote Thursday morning, 213-203, with 33 Democrats joining all GOP lawmakers in voting against it. Even if the bill passes the House, it has no chance in the Senate, where Democrats need Republican support to pass a tax bill.

"I am trying to catch my breath so I don't to refer to this ... as uh, chicken crap, alright?" said Boehner, who is in line to become House speaker in January. "But this is nonsense, alright? The election was a month ago."

Sweeping income tax cuts enacted under former President George W. Bush are set to expire at the end of the year. If Congress does not act, taxpayers at every income level would be hit with a significant tax increase.

Republicans and some rank-and-file Democrats want to extend the tax cuts for everyone, and the White House has left open the door for a compromise that would extend all the tax cuts for up to three years, including those for the wealthy.

Senate Republican leader Mitch McConnell of Kentucky has indicated he is open to a temporary extension of all the tax cuts, opening the way for a compromise.

Republican Sen. Jim DeMint of South Carolina said Thursday he believes Obama is ready to embrace the notion of keeping Bush-era tax rates in place for everyone, at least temporarily.

DeMint told CBS's "The Early Show" that he believes Obama "has come around to the idea that taxes can't be raised in a recession."

Treasury Secretary Timothy Geithner and White House Budget Director Jacob Lew began holding closed-door meetings Wednesday with a group of four lawmakers from both parties to negotiate a deal on tax cuts. Those talks continue Thursday, even as the House votes on the Democratic plan.

Reps. Chris Van Hollen, D-Md., and Dave Camp, R-Mich., two of the lawmakers involved in the tax negotiations, gave no indication Thursday that they were making any progress on a deal.

"We've just begun the discussion," said Camp. "But I think it's so important that we prevent a tax hike, so we can get the economy moving again and get job creation going again."

Van Hollen argued it's also important to pass an extension of unemployment benefits for people who are about to run out.

"You have to pay for about $13 billion in emergency unemployment compensation for people out of work through no fault of their own," he said. "But (Republicans) want a permanent extension of tax cuts for the folks at the very top, which adds $700 billion."

Van Hollen added, "This is the kind of conversation we've been having up here."

The White House is stepping up its push for Congress to extend unemployment insurance for out-of-work Americans, linking the benefits to an extension of expiring Bush-era tax cuts.

Obama's Council of Economic Advisers on Thursday reported that if Congress does not extend the benefits, 2 million unemployed workers will lose coverage this month and 7 million would lose coverage by November 2011.

White House spokesman Robert Gibbs reiterated on Wednesday that Obama's main goal is to prevent a middle-class tax increase. Obama's "other line in the sand" is that he won't support a permanent extension of tax cuts for the wealthy.

Obama has specifically voiced his objection to a permanent extension "to the wealthiest Americans."

"Having said that, we agreed that there must be some sensible common ground," Obama said.

House Majority Leader Steny Hoyer, D-Md., said the House vote wouldn't undermine bipartisan negotiations on the tax cuts, "nor is it intended to embarrass or to put Republicans in a difficult place."

"Right now, House Democrats are getting ready to send us a bill on taxes they know won't pass in the Senate," McConnell said Thursday.