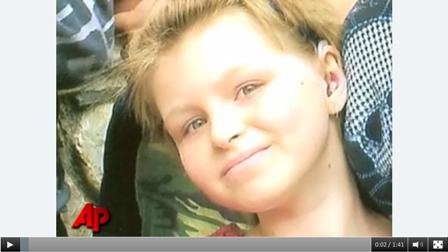 HICKORY, N.C. — Police indicated Tuesday they believe someone killed a 10-year-old North Carolina girl whose bone cancer left her with a prosthetic leg and hearing aids, saying they were shifting from a missing person search to a homicide investigation.
Zahra Clare Baker was reported missing Saturday, but police said they can't find anyone outside the household who has seen the girl alive in a month. Relatives described the child's life as miserable, saying she was locked in her room for most of the day and punished over little things.
The Skanner News Video here
Hickory Police Chief Tom Adkins said at a news conference that the girl's stepmother confessed to writing a ransom note found at the house where the girl lived, and she has been charged with felony obstruction of justice in the case. Elisa Baker, who was being held on unrelated charges, has also asked for an attorney.
Uncertainty over when the girl was last seen alive has stymied efforts to search for her, the chief said. Volunteers have offered to help look for her around the city of 40,000 residents about 50 miles northwest of Charlotte.
"We understand the public wants to help find Zahra. The problem is we cannot confirm with any confidence how long Zahra has been missing," he said at the news conference. "Without this information, we cannot positively select the area to search for her."
Adkins did not take any questions and did not offer further explanation of why the case was being treated as a homicide probe. A search warrant revealed on Monday that police dogs detected the smell of human remains on cars belonging to the father and stepmother.
The girl's father, Adam Baker, has not been charged in the case, though the chief said previously he hasn't been ruled out as a suspect. Police say he's cooperating in the case.
Adam Baker has said it was possible his wife could be involved in the disappearance, and other relatives echoed those remarks.
"I just think this was something for a long time that we knew was going to happen, everybody that was close to the family," relative Brittany Bentley said on CBS' "Early Show" on Tuesday.
Bentley, who is married to Elisa Baker's nephew, said she would have Zahra over for weekends and the girl would get mad when it was time to return home.
Zahra "was locked in her room, allowed five minutes out a day to eat, that was it," Bentley said. "She was beat almost every time I was over there for just the smallest things. Elisa would get mad, she would take it out on Zahra, things the kid didn't deserve. She just had a horrible home life."
Neighbors also feared the worst.
"There were warning signs along the way, but you never want to think the worst," said former neighbor Kayla Rotenberry.
Zahra was reported missing Saturday afternoon after a yard fire at the home. The stepmother said she last saw Zahra sleeping in her room about 12 hours earlier, though Adkins has indicated he doesn't believe the timeline the couple gave him.
Police responded to the fire early Saturday and found what appeared to be a ransom note addressed to Adam Baker's boss on the windshield of Baker's car, the search warrant said. Police went to that man's house, and found him and his daughter to be fine.
"Mr. Coffey, you like being in control now who is in control we have your daughter," the warrant quoted the ransom note as saying. It asked for $1 million dollars and said "no cops."
Elisa Baker was arrested Sunday on unrelated charges including communicating threats, writing worthless checks, larceny and driving with a revoked license.
Zahra was described by family friends as shy but constantly smiling, in spite of her health problems. The stepmother could be short-tempered toward her, former neighbors said, but the woman also fought tears when a charity fitted her for free hearing aids a few months ago.
The girl was being home-schooled, but had attended public schools in the past. Zahra used two hearing aids, which were left at the house, and a prosthetic left leg from the knee down, police said.
Adam Baker was from Australia, and met his current wife over the Internet, a family friend said. Zahra's mother lives outside the U.S.