By Helen Silvis of The Skanner News
Published: 10 September 2010 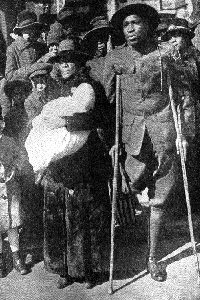 PHOTO: Returning black war heroes hoped their astounding feats would advance the cause of equal rights for all citizens. But those hopes were to be crushed by an America in the grip of fear, intolerance and racial hatred.

When the Harlem Hellfighters were sent to France's Western Front, they entered a killing zone where everyone ran a high risk of injury or death. Trench warfare meant living in horrible conditions under constant attack. Almost 10 million soldiers and 7 million civilians died in WWI. Casualties numbered 37 million.

The Hellfighters fought in four campaigns – sustaining 1500 casualties. During an incredible 190 days under fire, according to a regimental history, they never lost ground and never allowed one of their own to be taken prisoner. They advanced inexorably, and undoubtedly helped the Allies defeat the German-led coalition.

The French government recognized the Hellfighters' unrivaled bravery and achievements with many decorations. The entire regiment was honored with France's highest military decoration, the Croix de Guerre (Cross of War) with silver star. And 171 of the regiment's soldiers were awarded the Legion of Honor. Many individual soldiers also received the Croix de Guerre – including Sgt. Henry Lincoln Johnson. Johnson, and his fellow sentry Needham Roberts, fought off many enemy attackers – possibly as many as 24 -- using his gun and bolo knife to rescue Roberts from capture and alert his comrades. In the process he was shot three times and sustained 11 other injuries.

Former Secretary of the Army, Louis Caldera, recommended that Sgt. Johnson be awarded the Medal of Honor in 2001. But that recommendation was never carried out because Gen. Henry Shelton, chairman of the Joint Chiefs under George W. Bush, said that procedure had not been followed. 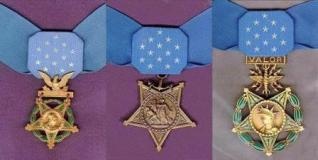 Campaigners say that President Obama and Congress should act now to recognize Johnson's achievements by awarding him the Medal of Honor.
"This is part of the larger American story," says Portland City Commissioner Nick Fish. "His time has come and the symbolism is not lost on any of us that it could be our first black president who puts right this wrong.

Heaped with honors in France, the Hellfighters returned to a tickertape parade in New York. They marched proudly down Fifth Avenue to Harlem, cheered by New Yorkers black and white alike.

The returning war heroes hoped their astounding feats would advance the cause of equal rights for all citizens. But those hopes were to be crushed by an America in the grip of fear, intolerance and racial hatred.

More than 20 race riots and more than 70 recorded lynchings took place in the violent summer of 1919 – named "The Red Summer" by the NAACP leader James Weldon Johnson. Historian John Simkin says among those lynched that summer were 10 black servicemen, some still in uniform.
Commissioner Fish's grandfather, Hamilton Fish Jr., became a lifelong champion of civil rights. Elected to Congress, he pushed for a federal anti-lynching bill – which failed over arguments about the rights of states to make their own laws.

"Those boys fought and died just the same as the white boys did," Hamilton Fish says in a documentary about the Hellfighters, Men of Bronze. "They were fighting for democracy."

Congressman Fish's second piece of legislation was the creation of the Tomb of the Unknown Soldier at Arlington National Cemetery.
"The soldier buried in that tomb came from the French conflict," Commissioner Fish says," so it is possible that it is a black soldier who is buried in the most hallowed ground for veterans."