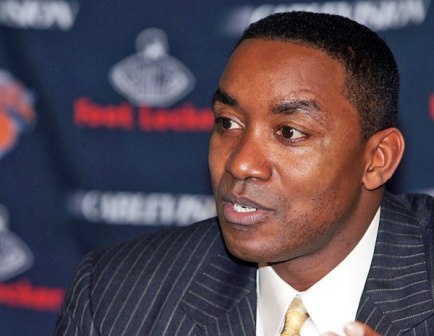 INDIANAPOLIS — The New York Knicks fired Isiah Thomas as coach two years ago, but he still hopes they cash in during the LeBron James sweepstakes.
Thomas said Tuesday that he thinks James should continue his career in the Big Apple.
"Go to New York," Thomas advised. "It's the biggest stage."
Thomas, who led the Detroit Pistons to two NBA titles and is in the Hall of Fame, said James' presence in New York would be good for the game: "I think that the interest in him in New York and in the league and everything else would just take the NBA to a higher level."

Thomas, now the head coach at Florida International, made the statements after participating in an Indiana University panel discussion about diversity in sports journalism.
James, who has played his first seven years with the Cleveland Cavaliers, officially becomes a free agent on Thursday and there's no shortage of teams interested in landing the two-time league MVP.
Thomas, if anyone, knows how difficult New York is. He was unpopular after finishing 33-49 in 2006-07 and 23-59 in 2007-08.
He thinks James can handle the spotlight.
"I think it's the hardest place to win," he said. "I think it presents the greatest challenge."
Thomas is far from the spotlight now. After his highly publicized split with the Knicks, he took over at Florida International. The team went 7-25 last season, but he is optimistic after pulling in a highly regarded recruiting class. Thomas remains excited about the prospect of rebuilding the program.
"Every job is important," he said. "It's no more important than when I was with the Indiana Pacers, taking over when they dismantled. Every job you get is extremely important to you."
Thomas didn't rule out a return to the NBA, though he wouldn't return as a coach.
"If I left college, I would only go back to the NBA as a general manager," he said. "That's where my skill is at — the evaluation of talent, putting together teams."