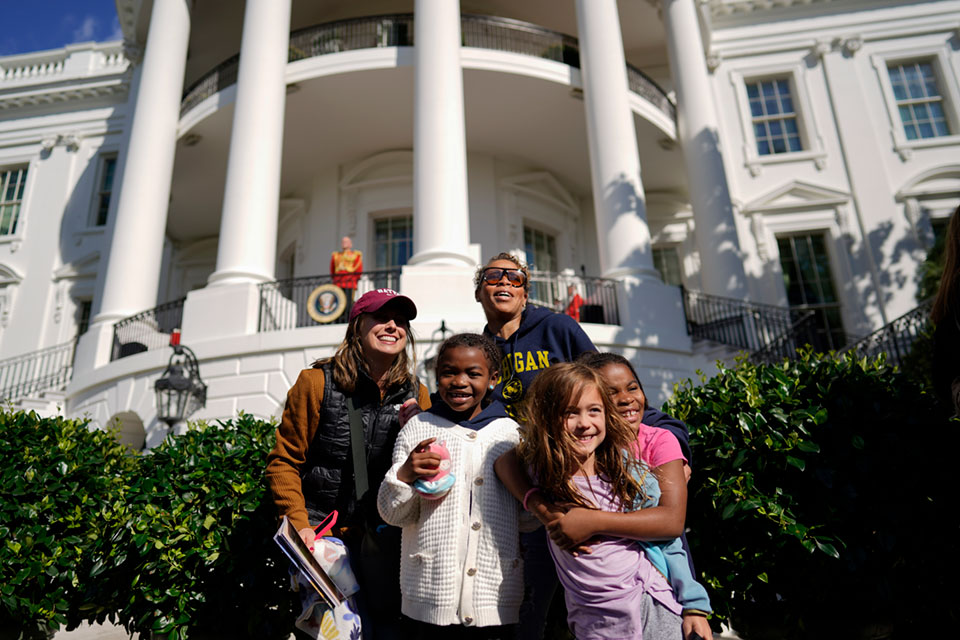 WASHINGTON (AP) — There were the young women in fresh fall coats, a guy in a suit, hoodied parents with kids, all maneuvering for selfies with the White House south facade. The plant fans and the history fans leaned in to admire the perennials and centuries-old trees on the lawns where Commander the dog lolls and Marine One the helicopter lands.

Again and again, Secret Service agents rose to the challenge of the White House fall garden tour over the weekend, open to all comers with a free ticket: “Off the grass!" one agent in black uniform shouted, squaring his shoulders, not for the first time, not for the last. A straying visitor hopped back on the path. 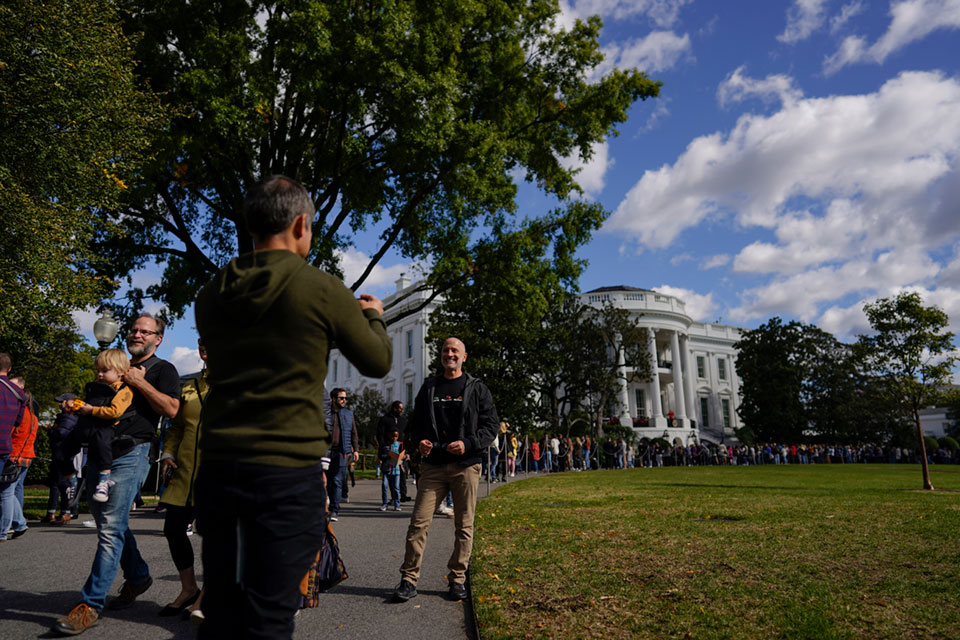 An estimated 30,000 people in all strolled through the White House's black metal gates on Saturday and Sunday, as the red-uniformed Marine Band, overlooking the South Lawn, played everyone through.

With some of the most formidable of temporary security fencing down and pandemic restrictions eased, the tours on a not-rainy weekend were a throwback to the White House's early days, when there were fewer restrictions on access to the People’s House. For a weekend, the tour sheared off some of the distance between the nation’s executive and a curious, divided public.

The annual fall and spring tours open the gates on gardens more than 200 years old — the oldest continually maintained landscape in the United States, says the National Park Service

“It's sort of a bucket list thing to check off,” said Ryan Harrison, 29. He and wife Lindsey Harrison, 30, came hours early from their Washington home to be in line at 7:07 a.m. Saturday. They wanted to see the Rose Garden, and maybe more.

“There's a chance the president will walk out and say hello," she said.

President Joe Biden, in fact, was at his home in Delaware.

There were limits to the hospitality: Grounds crews wheeled out evergreens in containers to block the path of a garden in the back, where the palm prints of grandkids and paw prints of pets offer a glimpse of the lives of the White House residents.

The human occupants weren't on hand, but the bees in the beehives were, scouting out head-high orange marigolds in the flourishing, blooming patch that hosts the kitchen vegetable garden started by Michelle Obama and the cutting-flower garden started by Jill Biden. 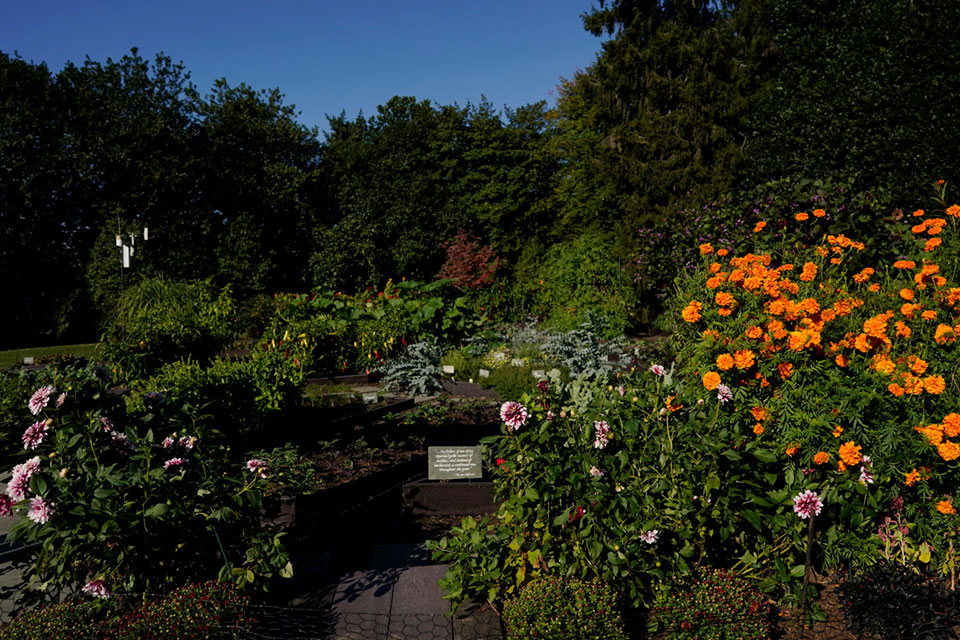 John Adams is credited with preparing ground for the first White House vegetable garden, although a reelection loss meant he left before the 1801 spring planting season, historians say. He hired white and Black workers during his time as president, although the White House Historical Association notes that other presidents brought Black people they held in slavery to work as gardeners.

The current head groundskeeper is Dale Haney, who was honored by the Bidens last week for his 50 years of service at the White House. In the minutes when the tour areas were open to journalists on the weekend but not yet the public at large, one gardener hauled off a last cart of limbs and leaves. Another tidied up with what appeared to be a battery-powered leaf blower (an aha moment for gardeners in these days of controversy over gasoline-powered ones).

Public access to the White House grounds may have hit its apogee in 1837, when Andrew Jackson celebrated George Washington's birthday by throwing open the White House doors to all — men and boys in frock coats and straw hats, women and girls in bonnets -— who wanted a share of a donated 1,400-pound (635-kilogram) cheese.

“For hours did a crowd of men, women and boys hack at the cheese, many taking large hunks of it away with them,” a journalist from the time wrote. “Nothing else was talked about at Washington that day.”

World War II, 9/11 and other security concerns steadily carved away at access for ordinary Americans.

When first lady Pat Nixon started the spring and fall garden tours in 1973, the White House itself still was open to visitors lining up for tours.

These days, members of the public generally are asked to go through congressional offices for spots on White House tours. Families enter a lottery for a spot in the annual White House Easter egg roll.

For the garden tour weekends, the line wraps around the metal gates surrounding about 18 acres (7 hectares).

A VIP group that came in at the head of Saturday’s garden tour was allowed close enough to peer in the windows, getting in the backdrop of people’s photos of a serene Rose Garden brightened by yellow flowers, and raising questions about just who was getting first gnaw on the big cheese. 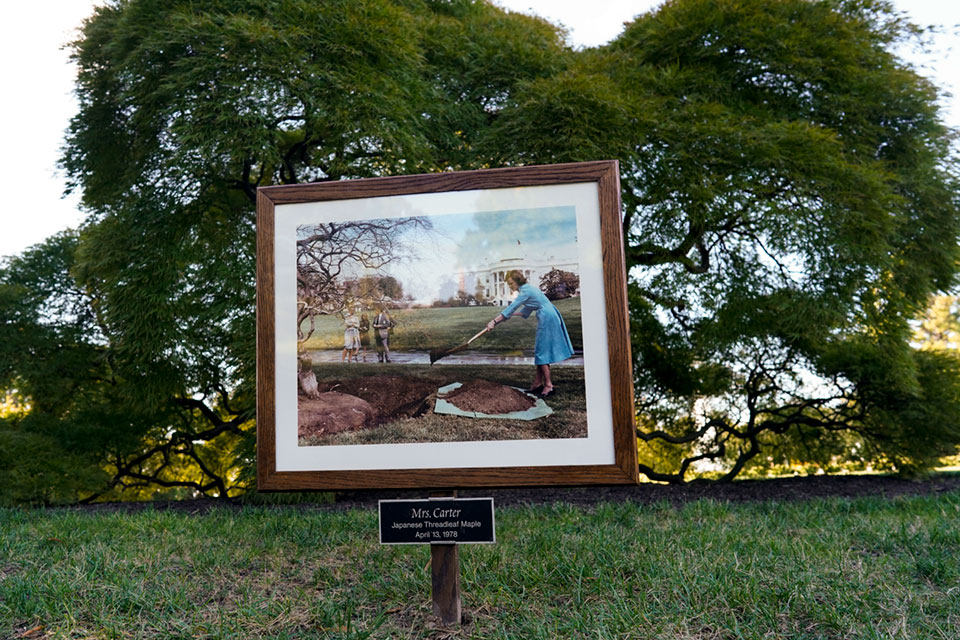 An image of first lady Rosalynn Carter planting the Japanese Threadleaf Maple in 1978 is displayed in front of the tree during the White House Fall Garden Tour in Washington, Saturday, Oct. 8, 2022. (AP Photo/Carolyn Kaster)

Rashida Holman-Jones, an administrator at the Washington-area SEED School, came through the gates with her 7-year-old twin girls, a 17-year-old student, Simona Weimer, and others.

Weimer was great with the compost and pitching in overall at the school's garden, Holman-Jones said. Holman-Jones got involved with school gardening as a direct outgrowth of Michelle Obama's gardening-friendly drive for better nutrition for kids.

At the time, “I wasn't into gardening," she said. “But I was really, really into Michelle Obama.”

In the White House gardens this past weekend, well-pruned boxwood-like plantings kept all the red, green, yellow, purple and orange, pollinator-friendly fall blooms in line.

Topiary was big. Photos and plaques marked trees planted by past presidents, with Queen Elizabeth II, Hillary Clinton and others also part of the planting pedigrees. The oldest trees are identified as two southern magnolias, planted by Jackson.

On Saturday, a man in a suit edged close to the White House exterior. A Secret Service agent looming alongside hip-high shrubbery told him to get back.

Images of birds that can be seen on the White House grounds are displayed during the White House Fall Garden Tour in Washington, Saturday, Oct. 8, 2022. (AP Photo/Carolyn Kaster)

Holman-Jones, a friend, and their beaming little girls pressed in for their photo. Weimer, from Ethiopia, got a photo for the folks back home, capturing her moment at the White House.