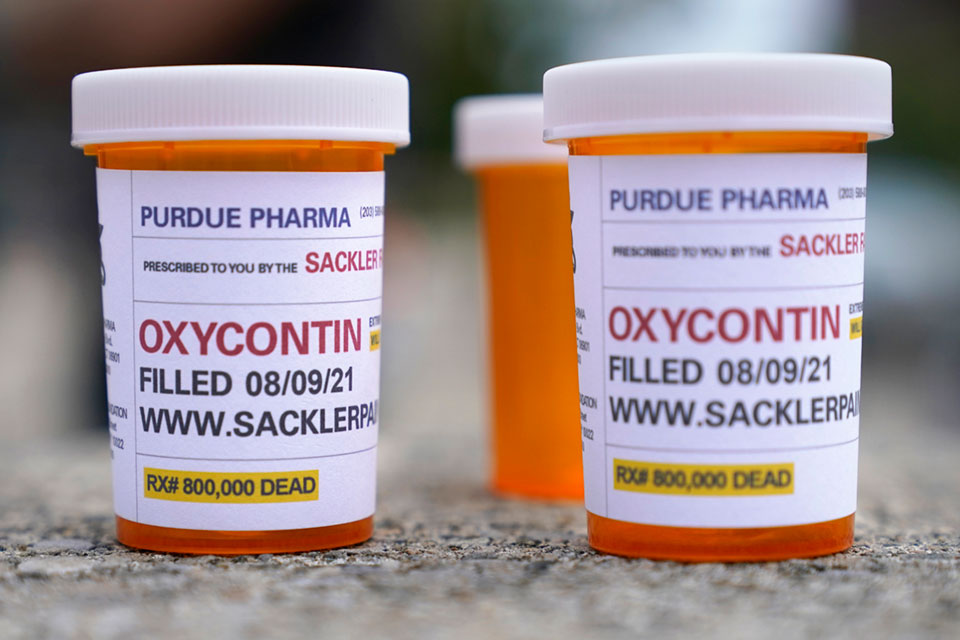 OxyContin maker Purdue Pharma reached a settlement Thursday over its role in the opioid crisis that includes virtually all U.S. states and thousands of local governments, with the Sackler family members who own the company boosting their cash contribution to as much as $6 billion.

The deal follows an earlier settlement that had been appealed by eight states and the District of Columbia. They agreed to sign on after the Sacklers kicked in more cash — including a portion that just those jurisdictions would control — and accepted other terms. In exchange, the family would be protected from civil lawsuits.

In all, the plan could be more than $10 billion over time. It calls for members of the Sackler family to give up control of the Stamford, Connecticut-based company so it can be turned into a new entity with profits used to fight the crisis. The deal would not shield members of the family from criminal charges, though there’s no indication any are forthcoming. 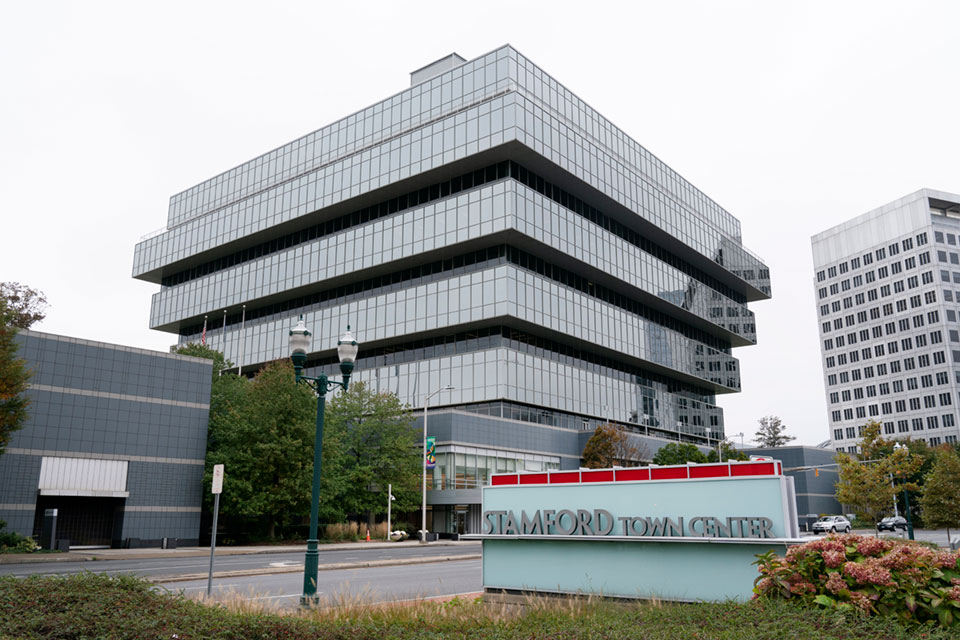 FILE - Purdue Pharma's headquarters stands in Stamford, Conn., on Oct. 21, 2020. A judge said he is extending legal protections for members of the Sackler family, Wednesday, March 2, 2022, who own OxyContin maker Purdue Pharma by another three weeks to buy time to work out a new settlement to thousands of lawsuits over the opioid crisis. (AP Photo/Mark Lennihan, File)

The settlement, outlined in a report filed in U.S. Bankruptcy Court in White Plains, New York, still must be approved by a judge.

“The Sackler families are pleased to have reached a settlement with additional states that will allow very substantial additional resources to reach people and communities in need," the family statement reads. "The families have consistently affirmed that settlement is by far the best way to help solve a serious and complex public health crisis. While the families have acted lawfully in all respects, they sincerely regret that OxyContin, a prescription medicine that continues to help people suffering from chronic pain, unexpectedly became part of an opioid crisis that has brought grief and loss to far too many families and communities.”

The new plan was hammered out with attorneys general from the eight states and D.C. who had opposed the earlier one, arguing that it did not properly hold Sackler family members accountable.

For Suzanne Domagala, of Millville, Delaware, even a modest payout to victims from the Sackler family is important, though she is still upset that the wealthy family is getting protection from lawsuits.

Domagala’s son Zach, a Marine Corps reservist, became addicted after injuring his shoulder during boot camp. When he died in 2017, she said, she didn’t have the money to bury him, and it took a few years before she could afford a headstone.

“That’s why when you’re looking at the costs of these things, money is such a trivial thing,” she said, “but it’s the only way to exact any justice.” 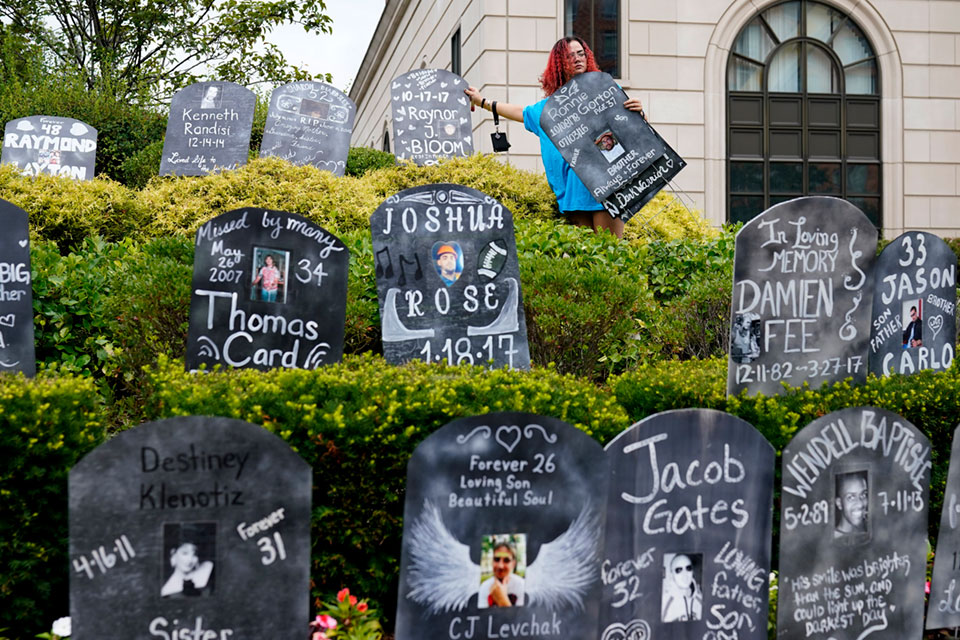 FILE - Jayde Newton helps to set up cardboard gravestones with the names of victims of opioid abuse outside the courthouse where the Purdue Pharma bankruptcy is taking place in White Plains, N.Y., on Aug. 9, 2021. A judge said he is extending legal protections for members of the Sackler family, Wednesday, March 2, 2022, who own OxyContin maker Purdue Pharma by another three weeks to buy time to work out a new settlement to thousands of lawsuits over the opioid crisis (AP Photo/Seth Wenig, File)

Ed Bisch, whose 18-year-old son died of an overdose 20 years ago, is glad states pushed Sackler family members to pay more but still called the settlement “a horrible deal” because so many parents who buried loved ones won’t see money — and the Sacklers will still be wealthy and free.

“Guess what? They still made billions and billions of dollars,” he said.

“Without any jail time, where is the deterrent? We’ve lost two generations to their greed.”

Individual victims and their survivors are to share a $750 million fund, a key provision not found in other opioid settlements. About 149,000 people made claims in advance and could qualify for shares from the fund; others with opioid use disorder and the survivors of those who died are shut out.

That amount is unchanged in the new plan, but states will be able to create funds they can use to compensate victims beyond that, if they choose.

Other new provisions include an agreement from Sackler family members that they won’t fight when institutions attempt to take the names off of buildings that were funded with the family’s support. And additional company documents are to be made public.

Most of the the money is to flow to state and local governments, Native American tribes and some hospitals, with the requirement that it be used to battle an opioid crisis that has been linked to more than 500,000 deaths in the U.S. over the past two decades.

“We’re pleased with the settlement achieved in mediation, under which all of the additional settlement funds will be used for opioid abatement programs, overdose rescue medicines, and victims," Purdue said in a statement issued separately from the family's. "With this mediation result, we continue on track to proceed through the appeals process on an expedited schedule, and we hope to swiftly deliver these resources.”

Kentucky and Oklahoma are not part of the deal because they both reached previous settlements with Purdue.

Purdue, the originator of time-release versions of powerful prescription painkillers, is the highest-profile company out of many that have faced lawsuits over the crisis. It has twice pleaded guilty to criminal charges related to its business practices around OxyContin.

The latest announcement follows another landmark settlement late last week, when drugmaker Johnson & Johnson and three distributors finalized a settlement that will send $26 billion over time to virtually every state and local governments throughout the U.S.

If the latest Purdue deal wins approval, the two settlements will give local communities that have been devastated by opioid addiction a significant boost to help them combat the epidemic.

There are two key differences between the the latest Purdue settlement and the previous one struck last year. The Sacklers’ cash contribution has gone up by at least $1.2 billion, and state attorneys general and the District of Columbia have now agreed.

As recently as Feb. 18, a mediator said a small but unspecified number of states were still holding out.

Holding out for greater punishment

Last year, the eight states — California, Connecticut, Delaware, Maryland, Oregon, Rhode Island, Vermont and Washington — and D.C. refused to sign on, and then most of them appealed after the deal was approved by the bankruptcy judge.

In December, a U.S. district judge sided with the nine holdouts. The judge, Colleen McMahon, rejected the settlement with a finding that bankruptcy judges lack the authority to grant legal protection to people who don’t themselves file for bankruptcy when some parties disagree.

Purdue appealed that decision, which, if left standing, could have scuttled a common method of reaching settlements in sweeping, complicated lawsuits.

Meanwhile, U.S Bankruptcy Judge Robert Drain, who had approved the earlier plan, ordered the parties into mediation and on several occasions gave them more time to hammer out a deal.

The new plan still requires Drain’s approval. Appeals related to the previous version of the plan could continue moving through the court system.

In a separate push to hold the Sacklers accountable for the opioid crisis, a group of seven U.S. senators, all Democrats, wrote the U.S. Department of Justice in February asking prosecutors to consider criminal charges against family members.