What Gov. Andrew Cuomo's Accusers Felt, in Their Own Words 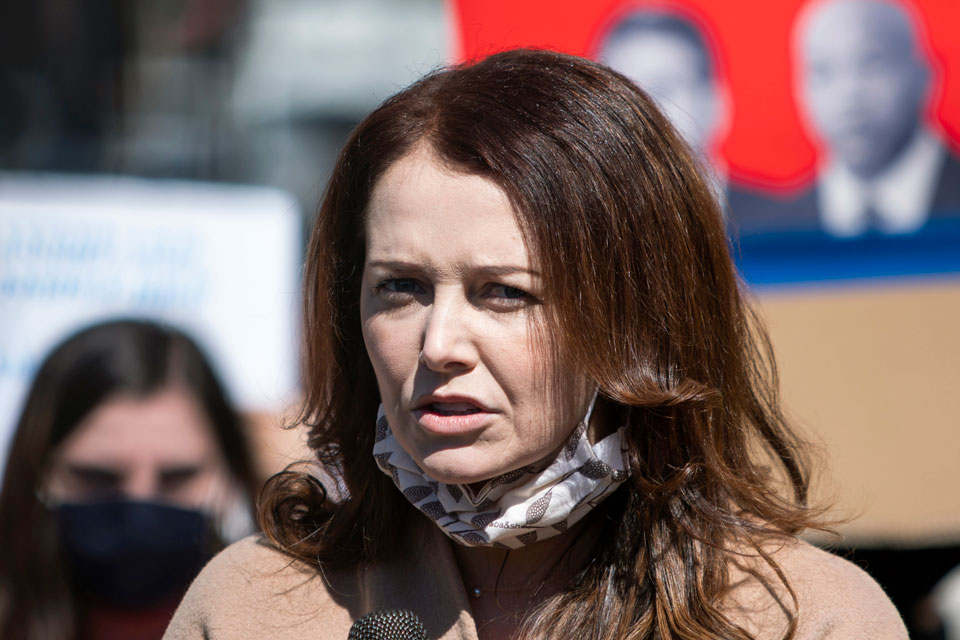 NEW YORK (AP) — Violated, demeaned, humiliated, a horror movie: Those are some of the words 11 women used to describe how Gov. Andrew Cuomo made them feel when he touched, kissed or hugged them or asked invasive questions.

Many of these women who spoke to investigators hired by the New York attorney general’s office were state employees. Others encountered Cuomo in professional settings or at public events.

A woman who accused Gov. Andrew Cuomo of groping her breast at the governor's state residence filed a criminal complaint against him, the Albany County Sheriff's office said Friday.

The complaint, filed Thursday with the sheriff's office, is the first known instance where a woman has made an official report with a law enforcement agency over alleged misconduct by Cuomo.

Albany County Sheriff Craig Apple told the New York Post it is possible the Democratic governor could be arrested if investigators or the county district attorney determine he committed a crime.

“The end result could either be it sounds substantiated and an arrest is made and it would be up to the DA to prosecute the arrest,” he told the newspaper, which was the first to report on the complaint. “Just because of who it is we are not going to rush it or delay it,” Apple said.

Prosecutors in several New York counties have said they are interested in investigating claims of inappropriate touching by Cuomo, but all had said they needed the women involved in the allegations to make a formal report.

The state Assembly’s judiciary committee plans to meet Monday to discuss the possibility of impeachment proceedings. A majority of members of the legislative body have already said they favor an impeachment trial if he won't resign.

Here , in their own words, is what each woman felt about how the governor treated her:

After being promoted to the governor's protection unit, a state police trooper told investigators Cuomo subjected to her to “flirtatious” and “creepy" behavior.

One time, in an elevator, he traced his finger from her neck to her back. Another time, he asked to kiss her in the driveway outside his Mt. Kisco home, she said.

“I remember just freezing, being — in the back of my head, I'm like, oh, how do I say no politely?” she told investigators.

At an event on Long Island, Cuomo ran his hand across her stomach and hip as she held a door open for him.

“I felt completely violated," she said. But she also felt like she couldn't say anything.

“I’m a trooper, newly assigned to the travel team. Do I want to make waves? No," she said.

“I’ve heard horror stories about people getting kicked off the detail or transferred over like little things ... I had no plans to report it.”

“The way he was repeating ‘You were raped and abused and attacked and assaulted and betrayed,’ over and over again while looking me directly in the eyes was something out of a horror movie."

That’s what Charlotte Bennett texted a coworker in 2020 about a conversation she’d just had where Cuomo gave feedback about a speech on sexual assault she was giving at her alma mater, she told investigators. She had confided in him that she had been assaulted.

Bennett said it was one of a number of uncomfortable conversations she had with Cuomo when she worked for him as a low-level aide. He asked whether she was monogamous and what she thought of age differences in relationships, said he needed a hug and told her he was looking for a girlfriend — anyone over age 22. She was 25.

In a text exchange at the time, a friend asked her if something had happened and she replied, “No but it was like the most explicit it could be,” and said she was shaking, writing:

“I'm so upset and so confused.”

This executive assistant described how Cuomo frequently hugged her, held her close and rubbed her back and gave her kisses.

“Any time he touched me I felt like it was inappropriate.

"He was my boss, let alone the Governor of the State of New York, so I definitely felt he abused his power and definitely knew that he had this presence about him, very intimidating,” she told investigators.

This executive assistant also told investigators that Cuomo had reached under her blouse and grabbed her breast in November last year. She is still an employee of the governor's office.

At an event in September 2019, this employee and her boss went to meet Cuomo and took a photo with him. She told investigators Cuomo touched her butt while the photo was being taken.

“I felt deflated and I felt disrespected and I felt much like smaller and almost younger than I actually am because kind of the funny part of it all is I was making this project happen. So we were there because, you know, the work that I had been doing and have continued to do...

"so it was just very, yeah, a moment of like, disempowerment.”

In an email written after the event that she sent to herself to document Cuomo's action, she wrote, “I then felt a lot of emotions around Cuomo’s inappropriate touching of my body, mostly shock and anger.”

An energy company employee, Virginia Limmiatis extended her hand to the governor while at an event in 2017. Instead of taking her hand, Cuomo slid his fingers across her chest, over letters printed on her shirt, and leaned in so their cheeks touched.

She told investigators she felt, "absolutely humiliated. It’s very difficult even talking about it.

"I was absolutely profoundly humiliated and appalled.

"I was in shock. Very negative feelings is the best way to describe it.”

While she told people at her company about what happened, she did not report it out of “trepidation and fear."

"How do you explain to someone what the Governor did in public, such an egregious act, heinous act. I was very fearful ... how does someone believe that this happened to me?”

In an online post from February, Lindsey Boylan, a former aide who served in various roles, said Cuomo once kissed her on the lips after a meeting.

“I was in shock, but I kept walking," she wrote.

Boylan told investigators it was “deeply humiliating on some level.”

"I think a lot of people are, like, of course this happened to young women who have no power. Well, I was really senior and I had worked my whole life to get to a point where I would be taken seriously and I wasn’t being taken seriously and I worked so hard to be some little doll for the Governor of New York and that was deeply humiliating.”

A young aide working for the governor, McGrath said Cuomo made sexually suggestive comments, held her uncomfortably close in photos and once looked down her blouse while she was taking notes.

But she didn't feel like she could complain about his behavior, partly because some coworkers had already commented on how the governor liked pretty faces around.

“I wanted to believe that I’m up there and helping out because of my good work. And I felt like if I said that to them, not only would I be embarrassed.

"I would, like, almost discredit myself," she told investigators.

A woman only identified by her first name told investigators that after she was hired as an aide in Cuomo's office, he told her to soak up information and referred to her as “sponge.”

She said she found the nickname “embarrassing... , condescending (and) demeaning."

She later transferred to work for another state agency and cried in an interview when explaining that she did not want to have contact with the governor in her new role.

She told WROC-TV in March that when she left the position, she felt she had failed professionally.

"My family and loved ones observed that I was not doing so well.

"I left to go work for Cornell on my own accord. I applied for the job, I didn’t seek out any help from the administration to help me secure a position somewhere else to escape. And at the time I viewed it as a lateral move and that I had failed, I couldn’t survive."

“You make that gown look good,” Cuomo told this employee as she swabbed his nose for a coronavirus test on television in March 2020.

“I felt that in my situation it was very, very brief," she later told investigators. "I did not have typical interactions with the Governor and I felt I had a lot of professional opportunities otherwise.

"I felt that in my professional standing I should share these facts, whatever they are, in order to support if there are any other women.”

A vomit emoji was how Anna Ruch ended a text message in which she shared photos of Cuomo holding her face at a wedding in September 2019. She had never met him previously and said he touched her back and asked to kiss her.

"I’m so pissed / I lost the photographers (sic) card but don’t want the photo of us on the wedding photos.