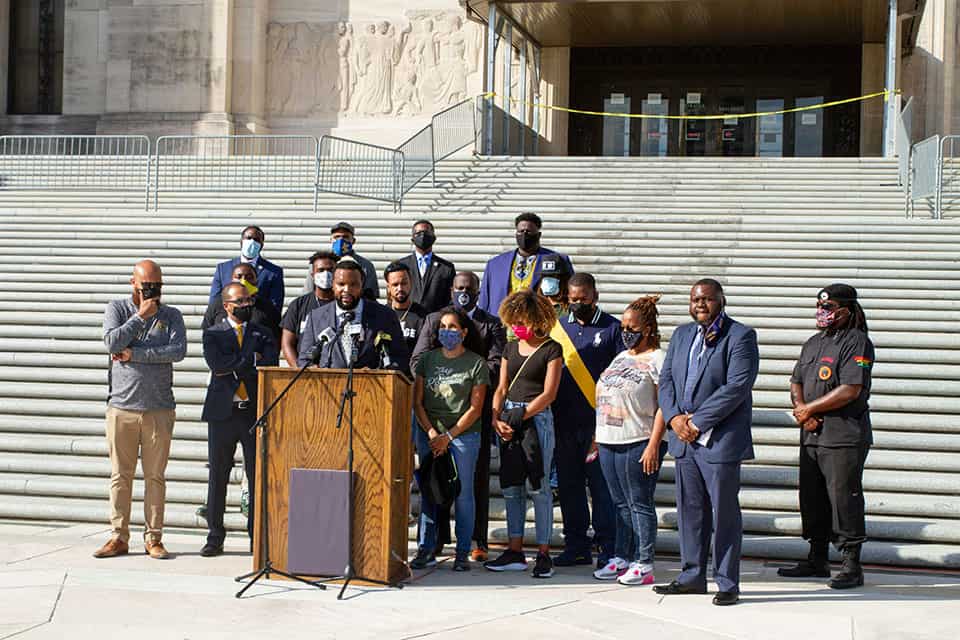 NEW ORLEANS (AP) — Louisiana state troopers were captured on body camera video stunning, punching and dragging a Black man as he apologized for leading them on a high-speed chase -- footage of the man’s last moments alive that The Associated Press obtained after authorities refused to release it for two years.

“I’m your brother! I’m scared! I’m scared!” Ronald Greene can be heard telling the white troopers as the unarmed man is jolted repeatedly with a stun gun before he even gets out of his car along a dark, rural road.

The 2019 arrest outside Monroe, Louisiana, is the subject of a federal civil rights investigation. But unlike other in-custody deaths across the nation where body camera video was released almost immediately, Greene’s case has been shrouded in secrecy and accusations of a cover-up.

Louisiana officials have rebuffed repeated calls to release footage and details about what caused the 49-year-old’s death. Troopers initially told Greene’s family he died on impact after crashing into a tree during the chase. Later, State Police released a one-page statement acknowledging only that Greene struggled with troopers and died on his way to the hospital.

Only now in the footage obtained by the AP from one trooper's body camera can the public see for the first time some of what happened during the arrest.

The 46-minute clip shows one trooper wrestling Greene to the ground, putting him in a chokehold and punching him in the face while another can be heard calling him a “stupid motherf---—."

Greene wails “I’m sorry!” as another trooper delivers another stun gun shock to his backside and warns, “Look, you’re going to get it again if you don’t put your f---—- hands behind your back!” Another trooper can be seen briefly dragging the man facedown after his legs had been shackled and his hands cuffed behind him.

Instead of rendering aid, the troopers leave the heavyset man unattended, facedown and moaning for more than nine minutes, as they use sanitizer wipes to wash blood off their hands and faces.

After a several-minute stretch in which Greene is not seen on camera, he appears again, limp, unresponsive and bleeding from his head and face. He is then loaded onto an ambulance gurney, his arm cuffed to the bedrail. 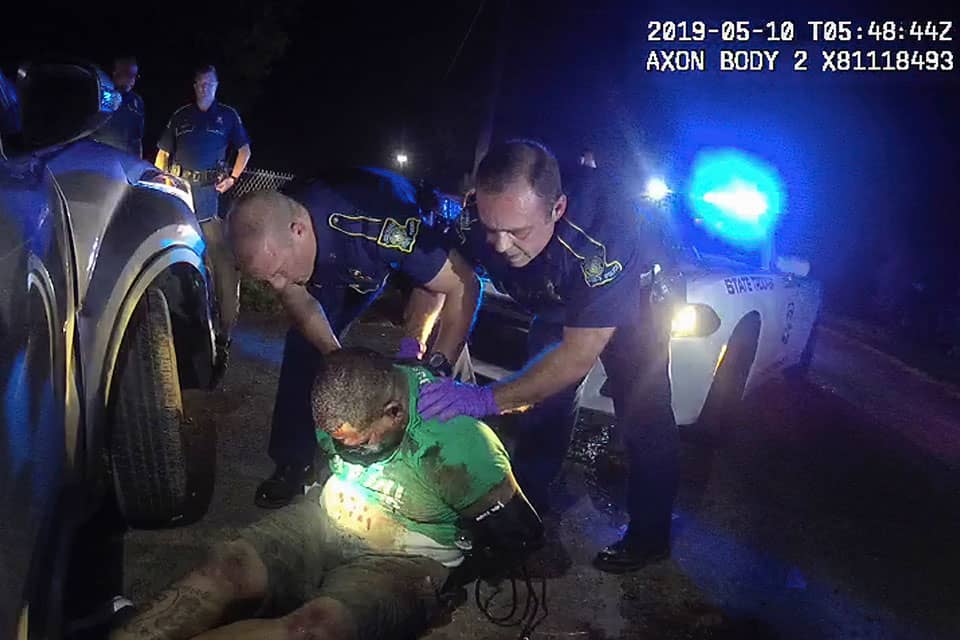 This image from video from Louisiana state police state trooper Dakota DeMoss' body-worn camera, shows troopers holding up Ronald Greene before paramedics arrived on May 10, 2019, outside of Monroe, La. The video obtained by The Associated Press shows Louisiana state troopers stunning, punching and dragging the Black man as he apologizes for leading them on a high-speed chase, footage authorities refused to release in the two years since Greene died in police custody. (Louisiana State Police via AP)

In many parts of the video, Greene is not on screen, and the trooper appears to cut the microphone off about halfway through, making it difficult to piece together exactly what was happening at all times. At least six troopers were on the scene of the arrest but not all had their body cameras on.

An attorney for Greene’s family, Lee Merritt, said the footage “has some of the same hallmarks of the George Floyd video, the length of it, the sheer brutality of it.”

“He apologized in an attempt to surrender,” Merritt said.

Louisiana State Police declined to comment on the contents of the video. In a statement, the agency said the “premature public release of investigative files and video evidence in this case is not authorized and ... undermines the investigative process and compromises the fair and impartial outcome.”

State Police brass initially argued the troopers’ use of force was justified — “awful but lawful,” as ranking officials described it — and did not open an administrative investigation until 474 days after Greene’s death.

“Police departments have got to stop putting roadblocks up to information that is, in the public’s eye, questionable. They have to reveal all that they know, when they know it,” said Andrew Scott, a former Boca Raton, Florida, police chief who testifies as an expert witness in use-of-force cases. “It suggests that you’re hiding something.”

While noting Greene “was not without fault” and appeared to resist the troopers’ orders, Scott said dragging the handcuffed man facedown by his ankle shackles was “malicious, sadistic, completely unnecessary.”

“That should never have never happened,” he said. “You’ve got the guy completely compromised. He’s not hurting anybody.”

"You don’t leave somebody lying on the ground, particularly after you’ve had this fight," Key said. “The training has been for a number of years that, as soon as you get someone under control, you put them on their side to facilitate their breathing ... and particularly this guy, because he was very heavy."

Gov. John Bel Edwards allowed Greene’s family to view the same body camera footage last year and pledged to release it to the public after the federal investigation runs its course.

Greene’s family has filed a federal wrongful-death lawsuit alleging troopers “brutalized” Greene, and “left him beaten, bloodied and in cardiac arrest” before covering up the cause of death. His family has released graphic photographs of Greene’s body on a gurney, showing deep bruises and cuts on his face and head. 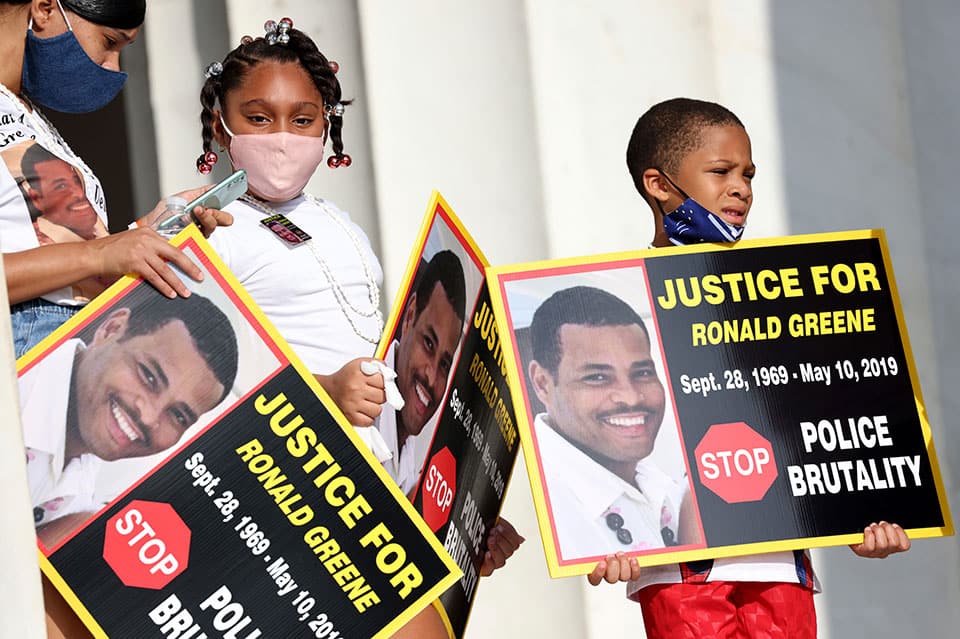 FILE - In this Aug. 28, 2020 file photo, family members of Ronald Greene listen to speakers as demonstrators gather for the March on Washington, in Washington, on the 57th anniversary of the Rev. Martin Luther King Jr.'s "I Have A Dream" speech. Body camera video obtained by The Associated Press shows Louisiana state troopers stunning, punching and dragging the Black man as he apologizes for leading them on a high-speed chase — footage authorities refused to release in the two years since the man died in police custody. (Michael M. Santiago/Pool via AP)

What prompted the chase

Greene, a barber, failed to pull over for an unspecified traffic violation shortly after midnight on May 10, 2019, about 30 miles south of the Arkansas state line. That’s where the video obtained by AP begins, with Trooper Dakota DeMoss chasing Greene’s SUV on rural highways at over 115 mph.

Seconds before the chase ended, DeMoss warned on his radio: “We got to do something. He’s going to kill somebody.”

As DeMoss and Master Trooper Chris Hollingsworth rush Greene’s SUV, he can be seen appearing to raise his hands and saying over and over, “OK, OK. I’m sorry."

Hollingsworth shocks Greene with a stun gun within seconds through the driver’s side window as both troopers demand he get out of the vehicle.

Greene exits through the passenger side as the troopers wrestle him to the ground. One trooper can be heard saying “He’s grabbing me” as they try to handcuff him. “Put your hands behind your back, bitch,” one trooper says.

Hollingsworth strikes Greene multiple times and appears to lie on one of his arms before he is finally handcuffed.

At one point, Trooper Kory York yanks Greene’s leg shackles and briefly drags the man on his stomach even though he isn’t resisting.

York was suspended without pay for 50 hours for the dragging and for improperly deactivating his body camera. York told investigators the device was beeping loudly and his “mind was on other things.”

Hollingsworth, in a separate recording obtained by AP, can be heard telling a colleague at the office that

“Choked him and everything else trying to get him under control,” Hollingsworth is heard saying. “He was spitting blood everywhere, and all of a sudden he just went limp.”

Hollingsworth later died in a single-vehicle highway crash that happened hours after he learned he would be fired for his role in the Greene case.

DeMoss, meanwhile, was arrested in connection with a separate police pursuit last year in which he and two other troopers allegedly used excessive force while handcuffing a motorist.

Exactly what caused Greene’s death remains unclear. Union Parish Coroner Renee Smith told AP last year his death was ruled accidental and attributed to cardiac arrest. Smith, who was not in office when that determination was made, said her office’s file on Greene attributed his death to a car crash and made no mention of a struggle with State Police.

The AP last year also obtained a medical report showing an emergency room doctor noted Greene arrived dead at the hospital, bruised and bloodied with two stun-gun prongs in his back. That led the doctor to question troopers’ initial account that Greene had “died on impact” after crashing into a tree.

“Does not add up,” the doctor wrote.