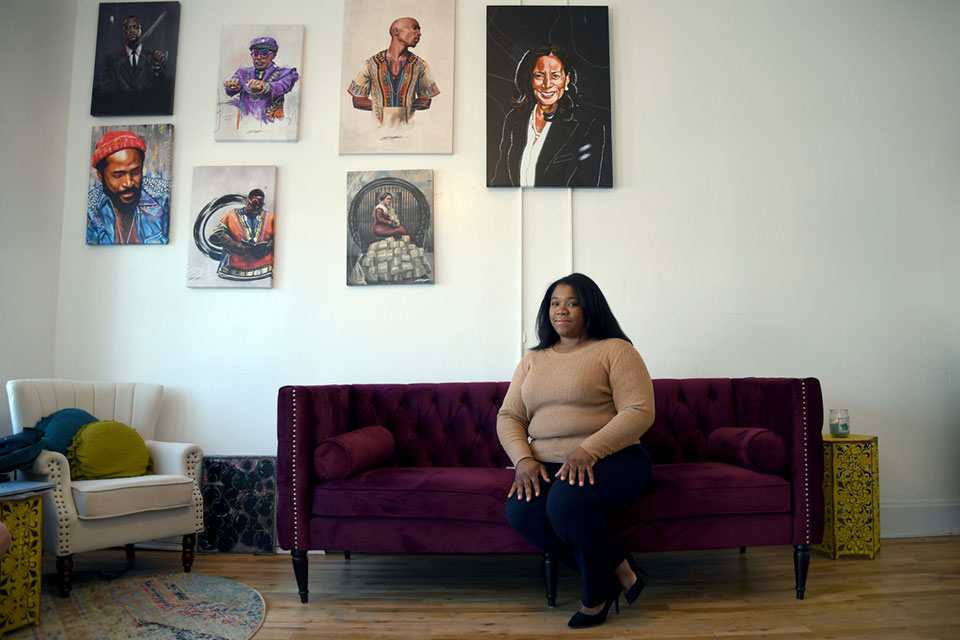 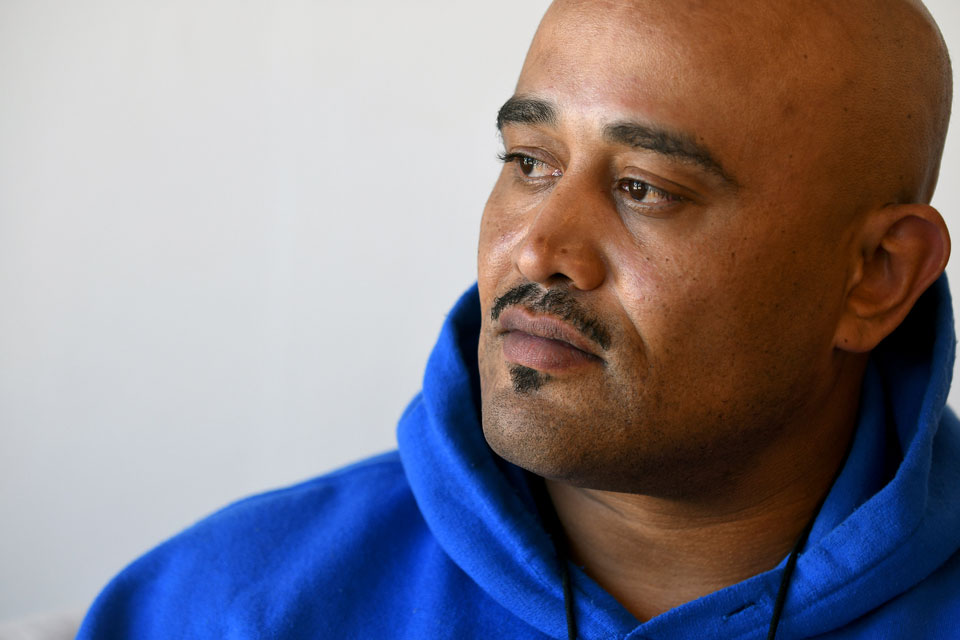 Terrence Hewing poses for a portrait in Denver on Saturday, April 3, 2021. Hewing, who was convicted of felony drug possession in suburban Denver in 2008, lost his job and for years struggled to find housing and a stable, well-paying career because of his criminal record. He is now one of only a few Black business owners in Colorado's recreational marijuana industry. He received a social equity license through a state program aimed at correcting past wrongs from the war on drugs. (AP Photo/Thomas Peipert)DENVER (AP) — Terrence Hewing was working for a package delivery company in 2007 when police approached his cargo van in suburban Denver. He was early for a pick up, and someone out for a walk called authorities after seeing him napping in the driver’s seat.

Officers found about a pound of marijuana inside the vehicle. That led to a couple of days in jail, thousands of dollars in legal fees and a felony conviction for drug possession. Hewing lost his job and, because of his criminal record, for years struggled to find housing and a stable, well-paying career.

“I felt like I was in a certain box in society," he said. “There’s people that don’t have felonies and people that do. It makes you almost feel kind of outcast.”

Hewing, 39, recently became one of only a few Black entrepreneurs to receive a business license in Colorado’s recreational marijuana industry. His goal is to run a company that delivers the very substance that stained his record.

His opportunity is the result of personal ambition paired with Colorado’s effort to right past wrongs from the war on drugs.

Hewing will enter the market as a so-called social equity operator, licensed under a program that provides reduced fees and mentoring to encourage the growth of new businesses, especially for Black people arrested or imprisoned for marijuana offenses.

Social equity has been a selling point for marijuana legalization in many states. New York, which last month broadly legalized cannabis use, has set a goal of getting 50% of licenses to minorities and other social equity applicants.

But so far the goals have far outstripped realities, partly due to legal entanglements as states look to broaden diversity in cannabis boardrooms, retail shops, production plants and greenhouses.

Disappointment with the slow rollout of equity programs has taken on a deeper resonance at a time when the nation is undergoing a racial reckoning, brought on by cases of police brutality and punctuated last year by the death of George Floyd in Minneapolis.

The limited statistics available indicate business owners and investors at the top of the booming industry remain overwhelmingly white.

In Nevada, about 30% of people in the state are Latino and 10% are Black. But the state’s first demographic survey of the cannabis industry released earlier this year showed only about 2% of board members identified as Black and just over 7% Latino.

States are making progress toward a more diverse marijuana industry but so far the push for social equity has been plagued with a lot of delays and litigation, said Karen O’Keefe, director of state policies at the Marijuana Policy Project. 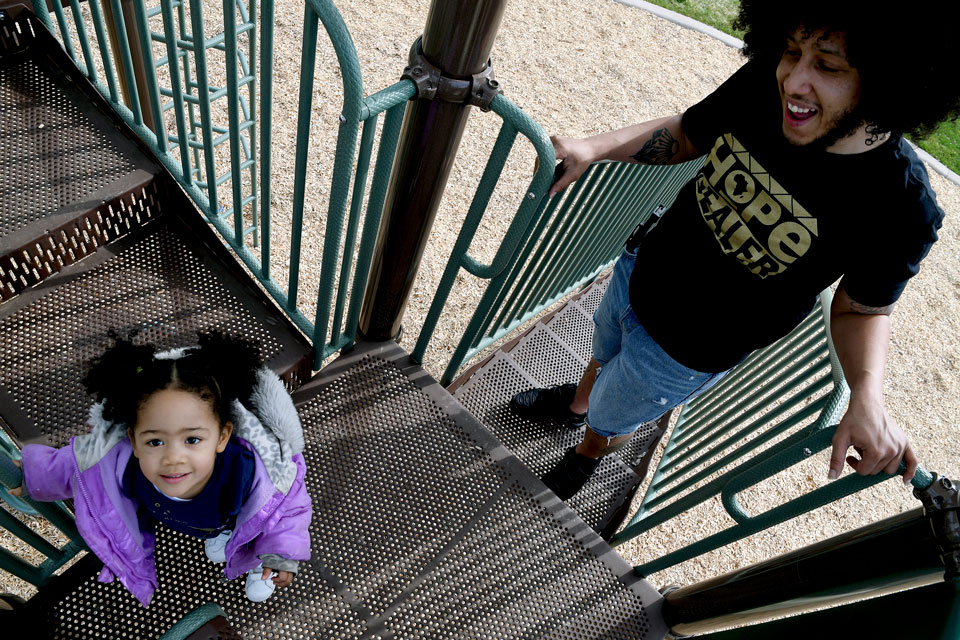 Michael Diaz-Rivera plays with his 2-year-old daughter Aria at a Denver park on Friday, April 23, 2021. Diaz-Rivera was pulled over in Colorado Springs, Colo. in 2006, and officers found two bags of marijuana in his car. After he was convicted of felony drug possession, he struggled to find housing, ran into hurdles while applying for federal student aid and was denied jobs. Now an elementary school teacher, he sees his future in a pot delivery business made possible by Colorado's marijuana social equity program, which is aimed at correcting past wrongs from the war on drugs. Diaz-Rivera says he hopes his business will allow him to pass on to his children generational wealth that he did not have growing up. (AP Photo/Thomas Peipert)In some cases, aspiring social equity licensees have been locked up again, this time in predatory contracts, with profits and control largely in the hands of investors. In others, they've been overmatched in a cutthroat market dominated by international companies valued at millions and sometimes billions of dollars.

And sometimes states themselves have been slow to establish and grow programs.

Voters in Washington and Colorado in 2012 made their states the first to legalize recreational marijuana. But only now are they moving toward greater social equity.

Colorado's program, which took effect at the beginning of the year, is open to all races, but the state Marijuana Enforcement Division says on its website the goal is to increase diversity, especially among owners. It also acknowledges “the effects of decades of criminal enforcement of marijuana laws on communities of color.”

According to a 2020 study by the American Civil Liberties Union, Black people in the United States are nearly four times more likely than white people to be arrested for marijuana possession, despite comparable usage. The study analyzed marijuana possession arrests from 2010 to 2018.

The Colorado program is open to those who lived in the state for at least 15 years between 1980 and 2010 in an opportunity zone or an area disproportionately affected by drug laws, which is determined by education and poverty levels, unemployment rates and the number of people who receive public assistance. The program also is open to those with a household income below 50% of the state’s median and those who either were or have a close family member arrested or convicted of a marijuana offense.

One provision allows new license holders to partner with an existing marijuana business to learn from an experienced professional.

Coming seven years after sales of recreational marijuana were legalized, it's been a long wait, said Sarah Woodson, Hewing’s wife and executive director of the advocacy group The Color of Cannabis.

“Once it becomes regulated, (they) literally should be the first people that have an opportunity to legitimize and capitalize from that business,” said Woodson, referring to people with marijuana convictions.

As many look for answers to increase minority participation in the business, a recurring question has emerged: Do equity programs do enough to help license holders who may have little, if any, business experience or access to capital needed to launch a successful company?

Los Angeles, the nation’s largest legal pot shop, opened for businesses in 2018. But more than three years later its social equity program remains a work in progress after getting tangled in a legal fight and later undergoing a major makeover, intended in part to shield inexperienced social equity licensees from shark investors.

The delays have left many potential operators and their financial backers in limbo, waiting for permission to open for business while start-up costs pile up. 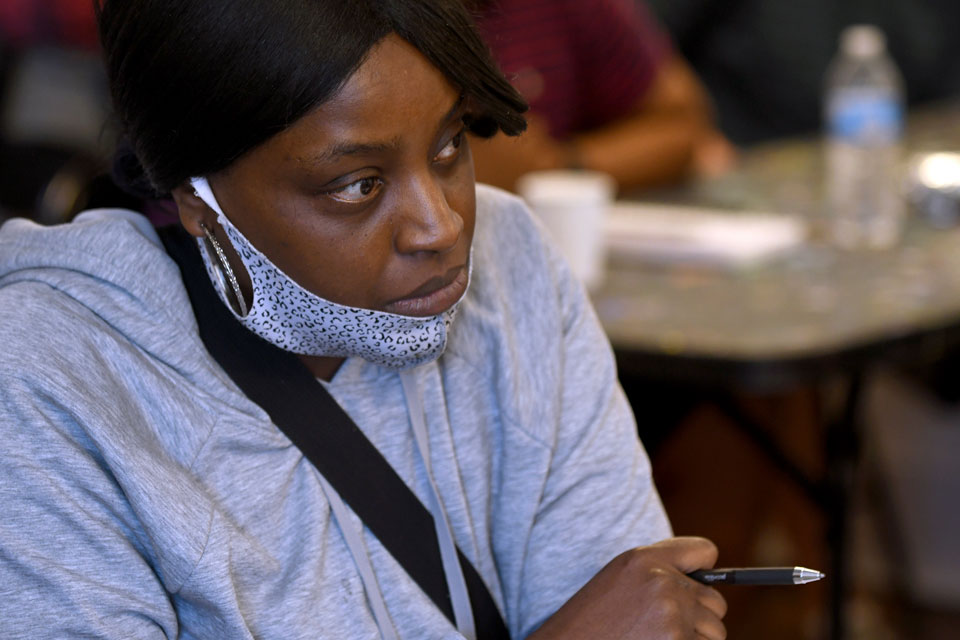 After two years of planning, an earlier partnership collapsed under delays and shifting regulations that prompted her initial investors to back out. By that time, the company had spent $350,000 on lease payments, lawyers and other costs. Keith, who is Black and grew up in South Los Angeles, has secured new financial backers but is still waiting for a license.

Keith likens her long fight to struggles of the past, like breaking down Jim Crow laws that enforced racial segregation in the South. “They continue to push us down deeper in the hole,” she said.

Companies generally are out to make profits and build brands, not focus on a humanitarian mission, she said. Investors could be uneasy about entering a partnership in which they would have to surrender significant control to the equity operator, as under rules in Los Angeles.

In capitalism, “the dollar rules,” she said.

Hoping to address such concerns, Woodson’s group, anchored in the historically Black neighborhood of Five Points near downtown Denver, runs a 10-week business course to help students navigate the social equity application process and to connect them with industry leaders.

Michael Diaz-Rivera, 35, who identifies as white, Black and Puerto Rican, recently completed the program, which teaches about business and marketing, filing taxes, and licensing and management, among other topics.

An elementary school teacher with a felony conviction for marijuana possession, Diaz-Rivera sees his future in a pot delivery business, though he acknowledges he’s had trouble finding investment and with little business experience worries about falling into an unfair contract.

With social equity “I’ve noticed that a lot of established businesses aren’t as interested in that because they don’t get anything out of it,” he said.

As for Hewing, he is bullish about his prospects, despite the obstacles.

“We’re trying to get it to where we’re actually creating businesses and owners and generational wealth,” he said. “People can help their communities and restore the negative damage that was caused by the war on drugs.”

Blood reported from Los Angeles. He is a member of AP’s marijuana beat team.