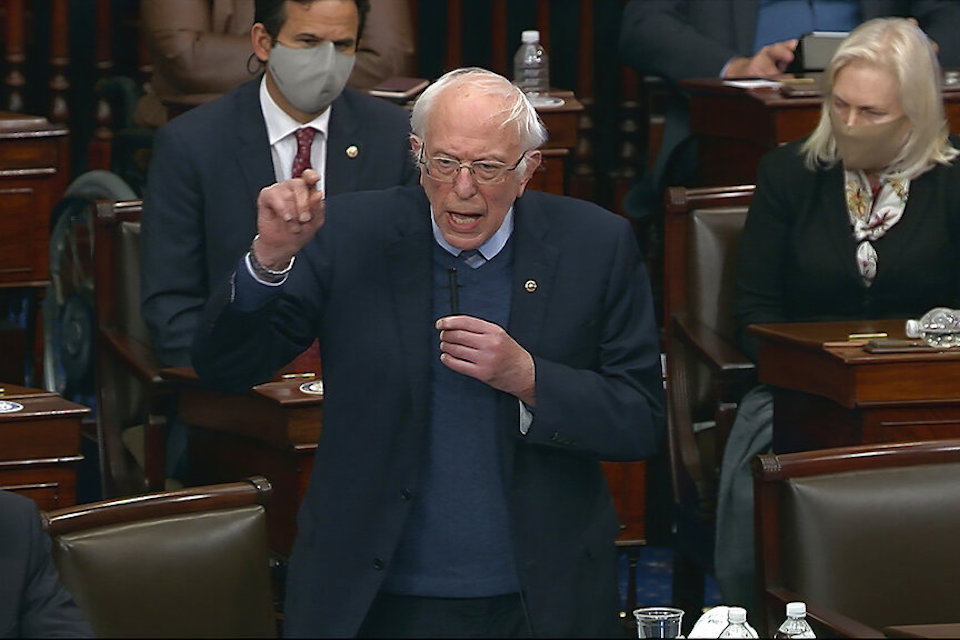 WASHINGTON (AP) — An exhausted Senate narrowly approved a $1.9 trillion COVID-19 relief bill Saturday as President Joe Biden and his Democratic allies notched a victory they called crucial for hoisting the country out of the pandemic and economic doldrums.

After laboring all night on a mountain of amendments — nearly all from Republicans and rejected — bleary-eyed senators approved the sprawling package on a 50-49 party-line vote. That sets up final congressional approval by the House next week so lawmakers can whisk it to Biden for his signature.

The huge measure — its total spending is nearly one-tenth the size of the entire U.S. economy — is Biden’s biggest early priority. It stands as his formula for addressing the deadly virus and a limping economy, twin crises that have afflicted the country for a year.

“This nation has suffered too much for much too long,” Biden told reporters at the White House after the vote. “And everything in this package is designed to relieve the suffering and to meet the most urgent needs of the nation, and put us in a better position to prevail.”

Saturday's vote was also a crucial political moment for Biden and Democrats, who need nothing short of party unanimity in a 50-50 Senate they run with Vice President Kamala Harris' tiebreaking vote. They have a slim 10-vote House edge.

Not a single Republican backed the bill in the Senate or when it initially passed the House, underscoring the barbed partisan environment that's so far characterizing the early days of Biden's presidency.

A small but pivotal band of moderate Democrats leveraged changes in the legislation that incensed progressives, not making it any easier for Speaker Nancy Pelosi, D-Calif., to guide the measure through the House. But rejection of their first, signature bill was not an option for Democrats, who face two years of trying to run Congress with virtually no room for error.

“They feel like we do, we have to get this done,” Senate Majority Leader Chuck Schumer, D-N.Y., said of the House. He said he'd spoken to Pelosi about the Senate's changes and added, “It's not going to be everything everyone wants. No bill is.”

In a written statement, Pelosi invited Republicans "to join us in recognition of the devastating reality of this vicious virus and economic crisis and of the need for decisive action.”

The bill provides direct payments of up to $1,400 for most Americans and extended emergency unemployment benefits. There are vast piles of spending for COVID-19 vaccines and testing, states and cities, schools and ailing industries, along with tax breaks to help lower-earning people, families with children and consumers buying health insurance.

Republicans call the measure a wasteful spending spree for Democrats’ liberal allies that ignores recent indications that the pandemic and economy could be turning the corner.

The Senate commenced a dreaded “vote-a-thon” — a continuous series of votes on amendments — shortly before midnight Friday, and by its end around noon had dispensed with about three dozen. The Senate had been in session since 9 a.m. EST Friday.

Overnight, the chamber was like an experiment in the best techniques for staying awake. Several lawmakers appeared to rest their eyes or doze at their desks, often burying their faces in their hands. At one point, Sen. Brian Schatz, D-Hawaii, at 48 one of the younger senators, trotted into the chamber and did a prolonged stretch.

The measure follows five earlier ones totaling about $4 trillion that Congress has enacted since last spring and comes amid signs of a potential turnaround.

Vaccine supplies are growing, deaths and caseloads have eased but remain frighteningly high, and hiring was surprisingly strong last month, though the economy remains 10 million jobs smaller than its pre-pandemic levels.

The Senate package was delayed repeatedly as Democrats made eleventh-hour changes aimed at balancing demands by their competing moderate and progressive factions.

Work on the bill ground to a halt Friday after an agreement among Democrats on extending emergency jobless benefits seemed to collapse.

Nearly 12 hours later, top Democrats and West Virginia Sen. Joe Manchin, perhaps the chamber's most conservative Democrat, said they had a deal, and the Senate approved it on a party-line 50-49 vote.

Under their compromise, $300 weekly emergency unemployment checks — on top of regular state benefits — would be renewed, with a final payment made Sept. 6. There would also be tax breaks on some of those payments, helping people the pandemic abruptly tossed out of jobs and risked tax penalties on the benefits.

Liberals vow to fight on for $15 minimum wage

The House's relief bill, largely similar to the Senate's, provided $400 weekly benefits through August. The current $300 per week payments expire March 14, and Democrats want the bill on Biden's desk by then to avert a lapse.

Manchin and Republicans have asserted that higher jobless benefits discourage people from returning to work, a rationale most Democrats and many economists reject.

The agreement on jobless benefits wasn't the only move that showed moderates' sway.

The Senate voted Friday to eject a House-approved boost in the federal minimum wage to $15 an hour by 2025, a major defeat for progressives. Eight Democrats opposed the increase, suggesting that Sen. Bernie Sanders, I-Vt., and other liberals pledging to continue the effort in coming months will face a difficult fight.

Party leaders also agreed to restrict eligibility for the $1,400 stimulus checks that will go to most Americans. That amount would be gradually reduced until, under the Senate bill, it reaches zero for people earning $80,000 and couples making $160,000. Those amounts were higher in the House version.

Many of the rejected GOP amendments were either attempts to force Democrats to cast politically awkward votes or for Republicans to demonstrate their zeal for issues that appeal to their voters.

These included defeated efforts to bar the bill's funds from going to schools closed for the pandemic that don't reopen their doors, or that let transgender students born male to participate in female sports.

One amendment would have blocked aid to so-called sanctuary cities, where local authorities balk at helping federal officials round up immigrants in the U.S. illegally.