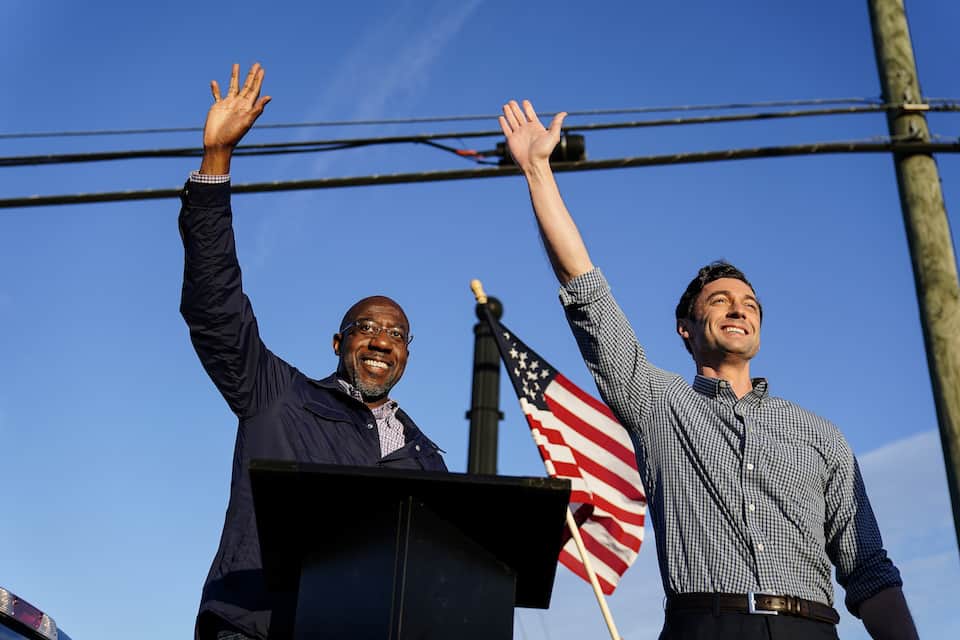 ATLANTA (AP) — The Georgia U.S. Senate runoffs don't take place until Jan. 5. But there are already some clear winners.

At the state's most influential television station, Atlanta's WSB, an ad that cost candidates $8,000 in July now goes for about $18,000. In the smaller market of Savannah, ad rates have soared nearly twentyfold.

With control of the Senate, and the scope of President-elect Joe Biden's agenda in the balance, the millions in political spending verges on something close to an unlimited budget.

The contest will test the limits of how far money can go in a political climate in which both sides are entrenched and few voters seem open to changing their minds. And President Donald Trump has complicated the contest by claiming baselessly that the November election in Georgia was beset by fraud.

Also at stake: whether Georgia, long a Republican stronghold, may be on the road to swing-state status, particularly after Biden became the first Democratic presidential candidate since Bill Clinton in 1992 to carry the state.

Partisans on both sides are spending big to find out.

Georgia's two Republican senators, David Perdue and Kelly Loeffler, are now fighting for their seats in Congress after neither won more than 50 percent of the vote on Election Day.

Democratic challenger Jon Ossoff is running against Perdue, while Democrat Raphael Warnock is challenging Loeffler, who was appointed to her seat after Sen. Johnny Isakson retired.

If Republicans win one race, they will maintain a narrow majority, and the chamber will serve as a bulwark against Democratic ambitions. But if Democrats carry both, the balance will be 50-50 —with Vice President-elect Kamala Harris delivering tie-breaking votes.

That will enable Biden to enact a more ambitious agenda, assuming he can keep fellow Democrats on board.

“Everyone is aware of the stakes of these two seats,” said Bradley Beychok, the president of American Bridge, a major Democratic outside group that has pledged to spend millions reaching out to rural voters.

“There’s a narrative that Democrats have an uphill battle, but we just won Georgia and we’re ready to go fight.”

As both parties shovel resources into the state, some speculate that the cost of the abbreviated contest could approach $500 million.

Already, $329 million in advertising has been spent or reserved in the state since Election Day, according to data from the ad tracking firm Kantar/CMAG.

The National Republican Senatorial Committee, which has formed a joint big-dollar fundraising operation with the two candidates that is led by longtime Republican operative Karl Rove, reported raising $75.5 million since Oct. 15.

Its counterpart, the Democratic Senatorial Campaign Committee, raised $31.6 million during the same period.

The candidates won't have to make the finances public until Dec. 24.

"Money isn’t everything, but fundraising is an early leading indicator of enthusiasm,” Steven Law, president of Senate Leadership Fund, said during an appearance on Fox News on Thursday.

“Republican voters in Georgia understand that everything is at stake. The Trump legacy, the future of freedom, the future of socialism, and right now they seem very energized to vote.”

Major Democratic committees focused on the Senate may have posted lackluster fundraising totals on Thursday, but party strategists say donors are instead routing cash to groups that are already established in the state.

Many of those groups are holding their strategy, tactics and bottom line close after record-setting hauls for Senate candidates in the fall ended in disappointment for candidates like Jaime Harrison of South Carolina, MJ Hegar of Texas and Steve Bullock of Montana. In some of those cases, the widely publicized fundraising success contributed to perceptions that they were funded by out-of-state interests.

While Biden’s campaign ran operations in Georgia until the Nov. 3 election, Senate Democrats’ campaign arm is in charge now.

Their efforts include paid door-to-door canvassing — a difference from the fall when the Biden campaign discouraged Democrats from in-person canvassing.

Among the most high-profile movers on the left is the Fair Fight organization, which voting rights advocate Stacey Abrams organized after her loss in the 2018 Georgia governor’s race. Abrams’ group on Thursday reported raising $34.5 million between Oct. 15 and Nov. 23.

That’s not the same eye-popping numbers of some of the major party PACs, but it’s targeted on voter turnout.

As an example, Fair Fight texted 2 million voters within days of the runoffs being set with information about how to secure absentee ballots for the second round. That’s about 80% of the total number of votes that Biden received in Georgia.

“People are very inspired by the Stacey Abrams magic,” said Michael Smith, a Los Angeles donor who has given to several groups raising money for the Georgia Democrats.

“Everyone in LA is raising money for Georgia. It’s a moral issue.”

Another group, called Really American PAC, has raised over $593,000 and hopes to put up 50 billboards in rural counties that urge Trump supporters to sit out the election, echoing a sentiment shared by some of the president's most dejected supporters.

The group says twelve billboards have gone up so far, which state: “Perdue/Loeffler Didn't Deliver For Trump, DON'T Deliver For Them.”

And at first blush, they look like ads from a right-leaning group.

In reality, however, Really American PAC was created by a progressive activist from Chicago named Justin Horwitz, who says he has a “shared interest” with the president's supporters in “defeating Washington insiders Perdue, Loeffler & McConnell, who happen to be trying to destroy Trump.”

That gets to the center of a preoccupation for Republicans.

Trump, who will hold a rally in the state Saturday, has refused to concede the election and has repeatedly attacked Georgia's Republican governor and secretary of state while falsely saying Biden's win there was the product of voter fraud.

That forces Loeffler and Perdue into a delicate dance of needing to both fire up Trump's core supporters who may distrust the outcome of the election, while not alienating suburban moderates, as well as anti-Trump Republicans, who swung for Biden.

Both candidates are scheduled to attend Trump's rally.

“I think it’s fraught with risk. If I'm Loeffler or Perdue, I wouldn’t want him to come,” said Dan Eberhart, a GOP donor who has previously given more than $190,000 to Trump's election efforts. “With the undisciplined nature of Donald Trump, there could be one, two or three sentences that completely derail and change the direction of the campaign.”