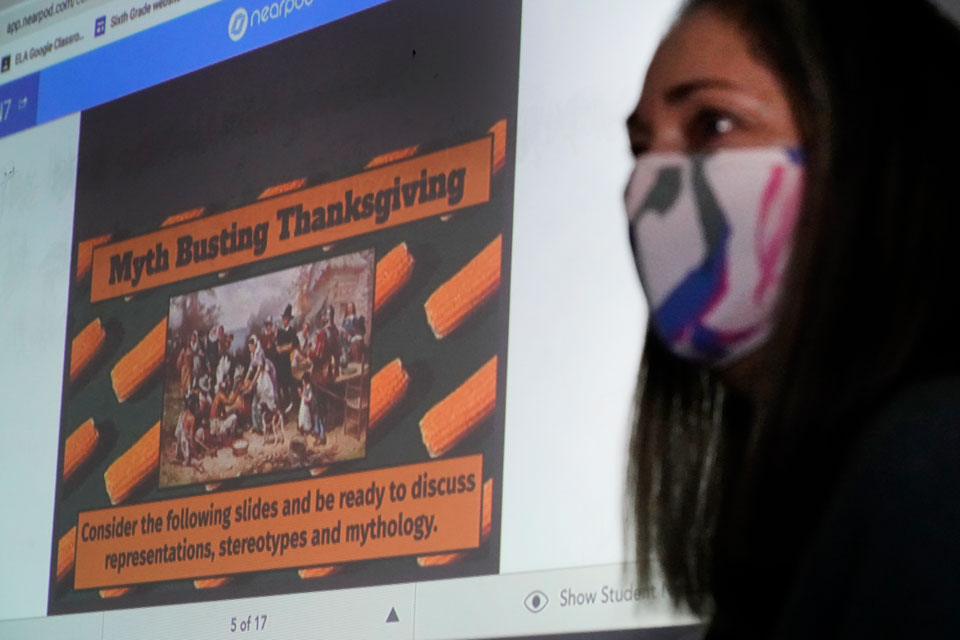 Students in many U.S. schools are now learning a more complex lesson that includes conflict, injustice and a new focus on the people who lived on the land for hundreds of years before European settlers arrived and named it New England.

Inspired by the nation’s reckoning with systemic racism, schools are scrapping and rewriting lessons that treated Native Americans as a footnote in a story about white settlers. Instead of making Pilgrim hats, students are hearing what scholars call “hard history” — the more shameful aspects of the past. 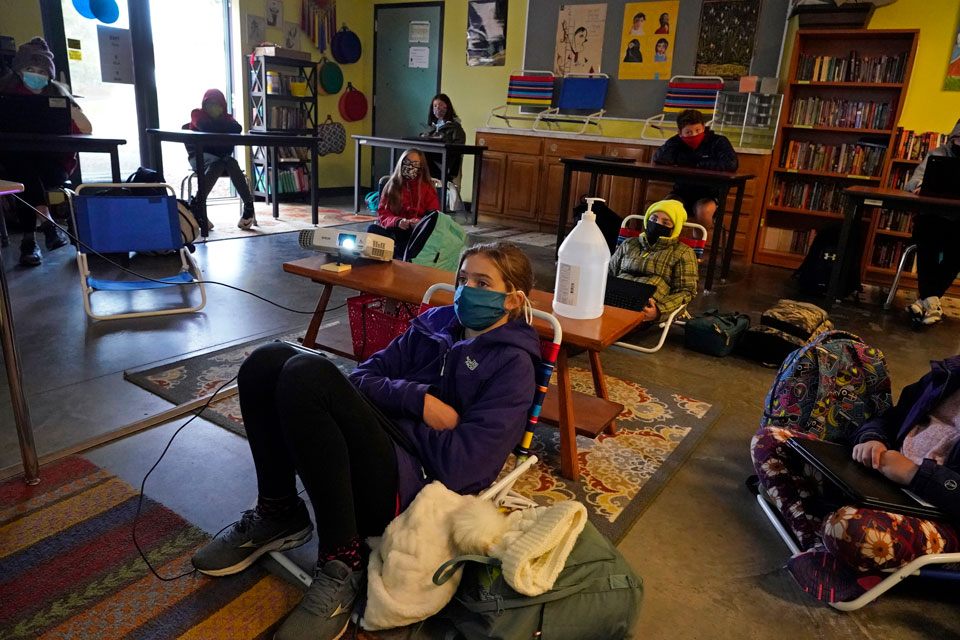 Sixth-grade students listen to instruction in Susannah Remillard's class at Cape Cod Lighthouse Charter School, Thursday, Nov. 19, 2020, in East Harwich, Mass. In a growing number of U.S. schools, students are now learning a more complex Thanksgiving story that involves conflict, injustice and a new focus on the native people who lived in New England for hundreds of years before European settlers arrived. (AP Photo/Elise Amendola)Students still learn about the 1621 feast, but many are also learning that peace between the Pilgrims and Native Americans was always uneasy and later splintered into years of conflict.

On Cape Cod, language arts teacher Susannah Remillard long found that her sixth grade students had been taught far more about the Pilgrims than the Wampanoag people, the Native Americans who attended the feast. Now she's trying to balance the narrative.

She asks students to rewrite the Thanksgiving story using historical records, and then she asks them to write a poem from the perspective of a person from that time, half settlers and half Wampanoag.

“We carry this Colonial view of how we teach, and now we have a moment to step outside that and think about whether that is harmful for kids, and if there isn’t a better way,” said Remillard, who teaches at Cape Cod Lighthouse Charter School in East Harwich, Massachusetts.

“I think we are at a point where people are now ready to listen.”

In Arlington Public Schools near Boston, students until recently dressed annually in Colonial attire. Now taboo, the costumes were abolished in 2018, and the district is working to expand and correct classroom teachings on Native Americans, including debunking Thanksgiving myths.

Students as young as kindergarten are now being taught that harvest feasts have been part of Wampanoag life since long before 1621, and that thanksgiving is a daily part of life for many tribes.

They're also being taught that the Pilgrims and Wampanoag were not friends, and that it's important to “unlearn” false notions around the feast.

“We don’t want the coloring books of the Pilgrims and the Native Americans,” said Crystal Power, a social studies coach.

“We want students to engage with what really happened, with who lived here first, and to understand that there was no such thing as the New World. It was only new from one side’s perspective.” 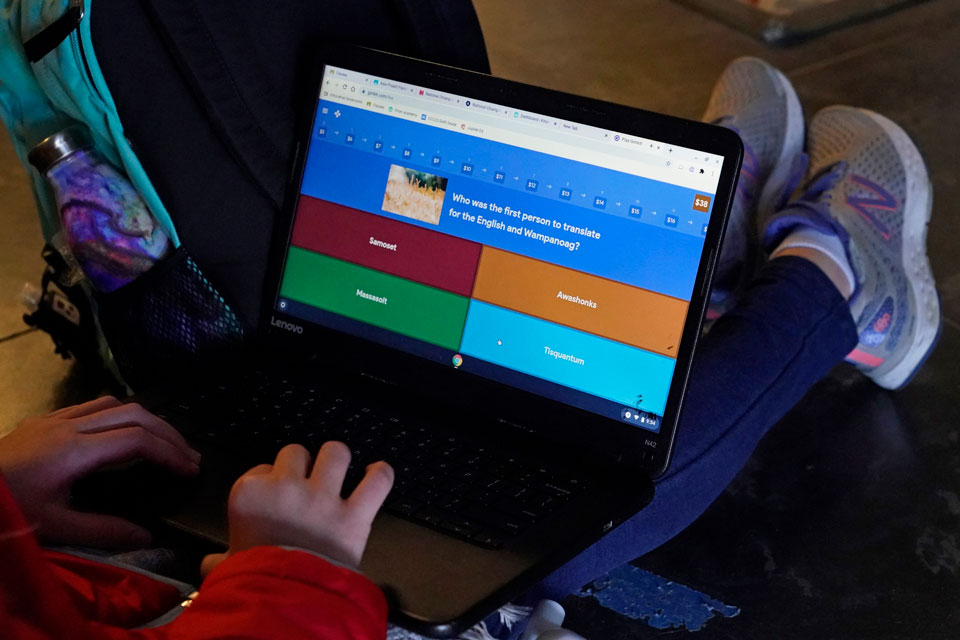 A sixth-grade student in Susannah Remillard's classroom works on her laptop at Cape Cod Lighthouse Charter School, Thursday, Nov. 19, 2020, in East Harwich, Mass. (AP Photo/Elise Amendola)Advocates for Indigenous education caution there's still much to improve. Change has been slow and spotty, they say, and many schools cling to insensitive traditions, including costumed dramas and paper headdresses.

“Progress seems to be gaining momentum, but there’s still a lot of work to do,” said Ed Schupman, manager of Native Knowledge 360, the national education initiative at the National Museum of the American Indian, and a citizen of the Muscogee (Creek) Nation of Oklahoma. “Change is still needed, and it has only been significant in some places.”

Schupman and the museum have worked with states as they create new teaching standards on Indigenous cultures. Montana in 1999 was among the first to require schools to teach tribal histories and is now joined by Washington, Oregon and others.

Even in states where it isn't mandatory, however, classrooms are becoming more inclusive.

After national protests over killings of Black people by police, Arlington's history department created a committee to examine race, which led to discussions about expanding and correcting teachings about African Americans, Native Americans and other groups too often left out. 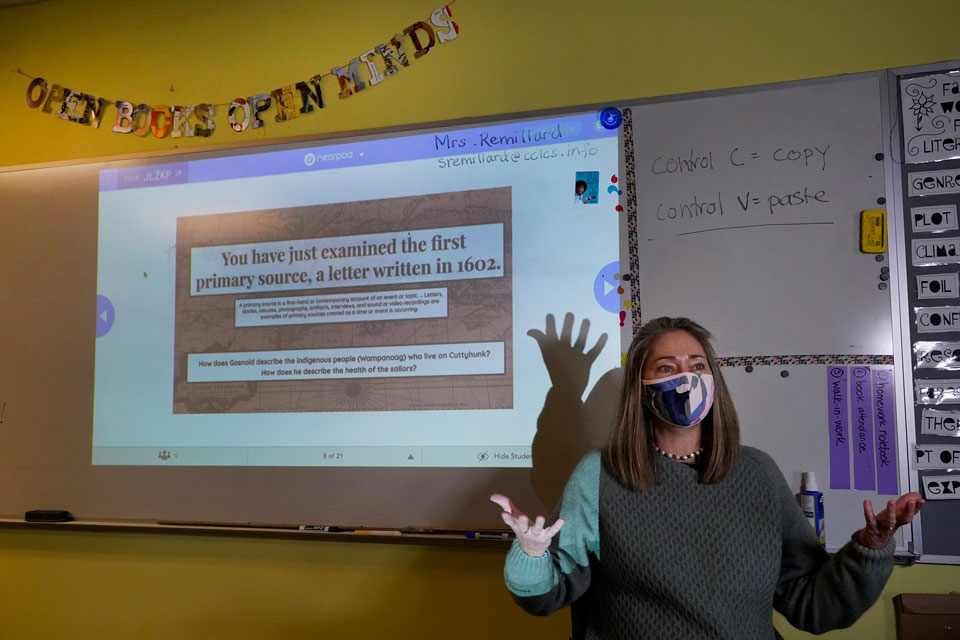 Susannah Remillard speaks in her sixth-grade classroom at Cape Cod Lighthouse Charter School, Thursday, Nov. 19, 2020, in East Harwich, Mass. (AP Photo/Elise Amendola)In recent guidance, the nearby Brookline school district urged teachers to incorporate native perspectives even on topics not necessarily specific to Indigenous people. It encourages lessons, for example, on the coronavirus' impact on Native Americans, and on Neilson Powless, who recently became the first Native American in the Tour de France.

Although schools say parents have mostly embraced the changes, they acknowledge it can be polarizing. Prominent lawmakers have resisted efforts to rethink Thanksgiving, including Sen. Tom Cotton of Arkansas, a Republican who last week blasted “revisionist charlatans of the radical left."

“Too many may have lost the civilizational self-confidence needed to celebrate the Pilgrims,” Cotton said.

School officials say they aren't changing history, but adding parts that have been left out. Standard social studies textbooks have included little about Native Americans, and alternatives were long elusive. Teachers say that's changing, thanks to native scholars who have authored children's books, lesson plans and other materials.

US history before the Mayflower 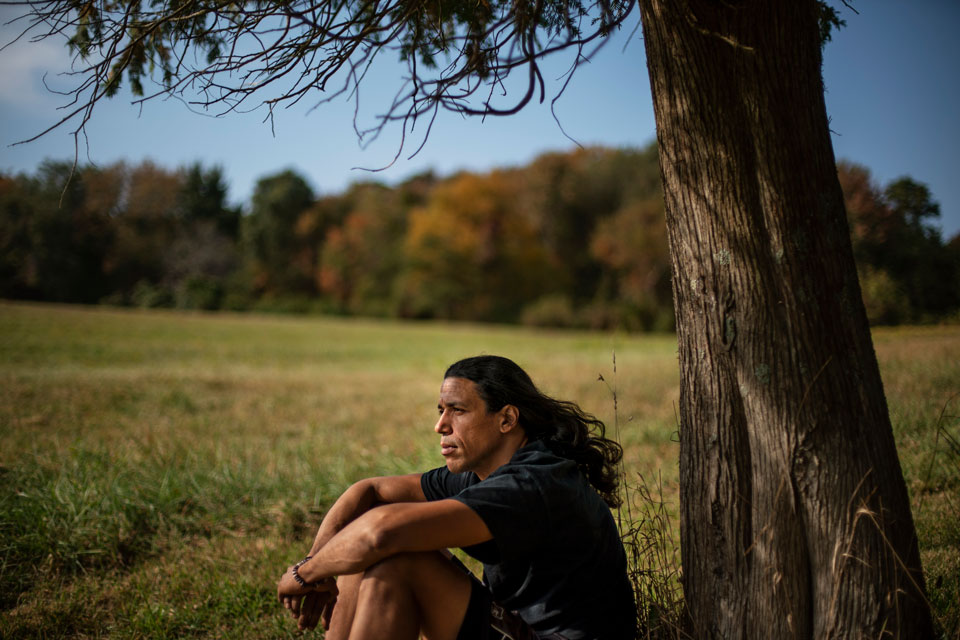 In this Sept. 25, 2020, file photo, Annawon Weeden sits for a portrait outside his home in Oakdale, Conn. As schools rethink Thanksgiving lessons, many are also looking to expand lessons on native cultures throughout the year. And while schools are increasingly turning to lessons created by native educators, some are also working to bring native voices directly into the classroom. A growing number of schools around Boston have started hosting annual visits from Weeden, a performing artist and member of the Mashpee Wampanoag Tribe. (AP Photo/David Goldman, File)In Massachusetts this year, every public school is getting copies of a new state history book co-written by a Wampanoag author and historian. The book was published to coincide with the 400th anniversary of the Mayflower’s arrival, but it notably begins thousands of years earlier, with the history of the Wampanoag people.

Many schools are also adding lessons on native cultures through the year, including around Columbus Day, which some districts now mark as Indigenous Peoples Day. More are also looking for ways to bring Indigenous voices directly into the classroom.

Before the pandemic, schools around Boston hosted annual visits from Annawon Weeden, a performing artist and member of the Mashpee Wampanoag Tribe.

Weeden makes a point of arriving in modern clothes to dispel faulty notions about Indigenous people. Only after taking questions and debunking myths does he change into traditional regalia and demonstrate tribal dances.