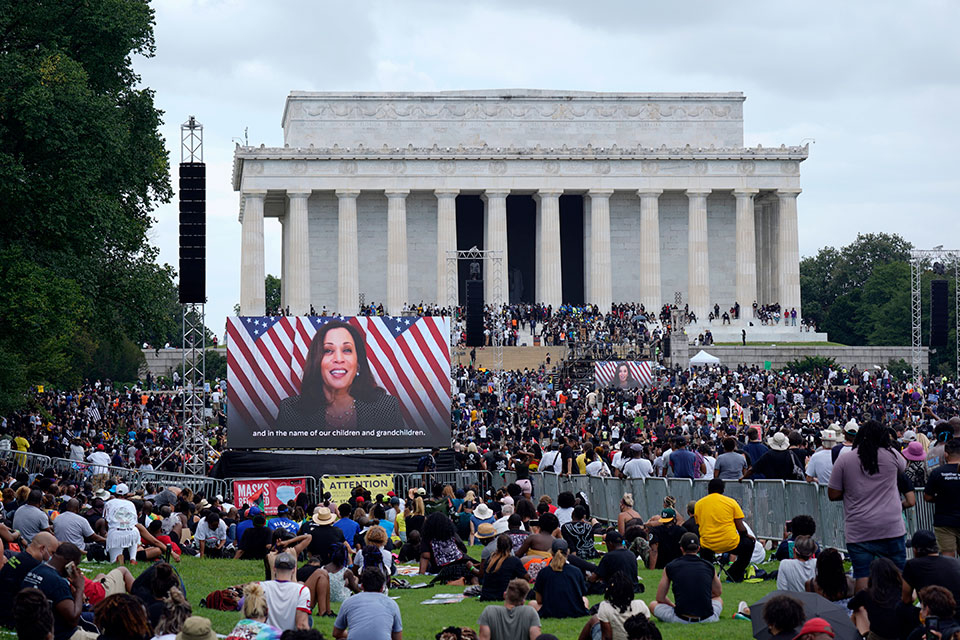 WASHINGTON (AP) — Capping a week of protests and outrage over the police shooting of a Black man in Wisconsin, civil rights advocates began highlighting the scourge of police and vigilante violence against Black Americans at a commemoration of the 1963 March on Washington for Jobs and Freedom.

An estimated thousands have gathered Friday near the steps of the Lincoln Memorial, where the Rev. Martin Luther King, Jr. delivered his historic “I Have A Dream” address, a vision of racial equality that remains elusive for millions of Americans.

And they are gathering on the heels of yet another shooting by a white police officer of a Black man — this time, 29-year-old Jacob Blake in Kenosha, Wisconsin, last Sunday — sparking days of protests and violence that left two dead.

“I want to give space for Black people in the crowd to say they are not OK,” said Jumaane Williams, New York City’s public advocate, who addressed march attendees shortly after the program began.

“We are like the nameless grandmothers who got in the streets and said, ‘We will make you live up to what America says she is,’” Williams said. “We are here. We’re not going anywhere.”

Activist Frank Nitty, who said he walked 750 miles for 24 days from Milwaukee, Wisconsin, to Washington for Friday's march, spoke to the audience about persistence in the fight for justice.

“Are y’all tired? Because I’m tired,” Nitty said. “They think this is a negotiation, but I came here to demand change.

"My grandson ain’t gonna march for the same things that my granddaddy marched for. This is a revolution.”

“My hope is that my son doesn’t have to be out here in another 50 years protesting the same thing,” Butler said.

Early on, the march was shaping up to be the largest political gathering in Washington since the coronavirus pandemic began. Many attendees showed up wearing T-shirts bearing the image and words of the late Rep. John Lewis who, until his death last month, was the last living speaker at the original March on Washington for Jobs and Freedom, which went on to become one of the most famous political rallies in U.S. history, and one of the largest gatherings at the nation’s capital with over 200,000 people advocating for social change.

Participants streaming in for the march late Friday morning stood in lines that stretched for several blocks, as organizers insisted on taking temperatures as part of coronavirus protocols. Organizers reminded attendees to practice social distancing and wear masks throughout the program.

“We’ve come to bear witness, to remain awake, to remember from where we’ve come and to carefully consider where we’re going,” King said. “Whether you’re here in person or watching on (television networks), thank you for joining us for this March on Washington.”

"We’re taking a step forward on America’s rocky but righteous journey toward justice,” he added.

“We didn’t just come out here to have a show," Sharpton said. "Demonstration without legislation will not lead to change.”

And to underscore the urgency, Sharpton assembled the families of an ever-expanding roll call of victims: Blake, George Floyd, Breonna Taylor, Rayshard Brooks, Ahmaud Arbery, Trayvon Martin, and Eric Garner, among others.

Arbery and Martin both were killed by white men who pursued them with guns.

Following the commemorative rally, participants will march to the Martin Luther King, Jr. memorial in West Potomac Park, next to the National Mall, and then disperse.

Turnout in Washington was expected to be lighter than initially intended due to city-imposed coronavirus pandemic restrictions that limit out-of-state visitors to the nation’s capital. To that end, the National Action Network organized a handful of satellite march events in South Carolina, Florida and Nevada, among others.

Robbie Williams, 67, traveled to the march from Covington, Kentucky, and said attending was her way of “speaking to my children and my people.”

“My message to my children is to stand up no matter what. And to the police: get some education and read your bibles,” Williams said, adding that she also wants Black communities to honestly confront internal violence and homophobia.

“I stand here in the spirit of our brother Bayard Rustin,” he said, referring to the King adviser who helped organize the original march. “Without his brilliance and his commitment to our intersectional social justice, there would not have been a March on Washington.”

While participants march in Washington, Sharpton has called for those in other states to march on their U.S. senators’ offices and demand their support of federal policing reforms. Sharpton said protesters should also demand reinvigorated U.S. voter protections, in Lewis' memory.

In June, the Democrat-controlled House of Representatives passed the George Floyd Justice In Policing Act, which would ban police use of stranglehold maneuvers and end qualified immunity for officers, among other reforms. Floyd, a Black man, died May 25 after a white police officer in Minneapolis held a knee to the man’s neck for nearly eight minutes, sparking weeks of sustained protests and unrest from coast to coast.

In July, following Lewis’ death, Democratic senators reintroduced legislation that would restore a provision of the historic Voting Rights Act of 1965 gutted by the U.S. Supreme Court in 2013. The law previously required states with a history of voter suppression to seek federal clearance before changing voting regulations.

Both measures are awaiting action in the Republican-controlled Senate.

In her remarks at the march, Rep. Sheila Jackson Lee, whose Texas district includes Floyd's hometown of Houston, referenced a line from the Rev. Martin Luther King, Jr.'s “I Have a Dream” address that decries America for giving Black people “a bad check, a check which has come back marked 'insufficient funds.'”

“Today, we stop the insufficient funds and we put money in the bank,” Lee said, vowing to keep pushing for enactment of the federal legislation.

Later in the evening, the Movement for Black Lives, a coalition of more than 150 Black-led organizations that make up the broader Black Lives Matter movement, will hold its virtual Black National Convention.

The convention will coincide with the unveiling of a new Black political agenda intended to build on the success of this summer’s protests. The platform will deepen calls for defunding police departments in favor of investments to healthcare, education, housing and other social services in Black communities, organizers said.

Aaron Morrison reported from New York. Kat Stafford and Ashraf Khalil reported from Washington, and journalists from across the AP contributed to this report.