New York to Get 1,100 Ventilators Helped by China and Oregon 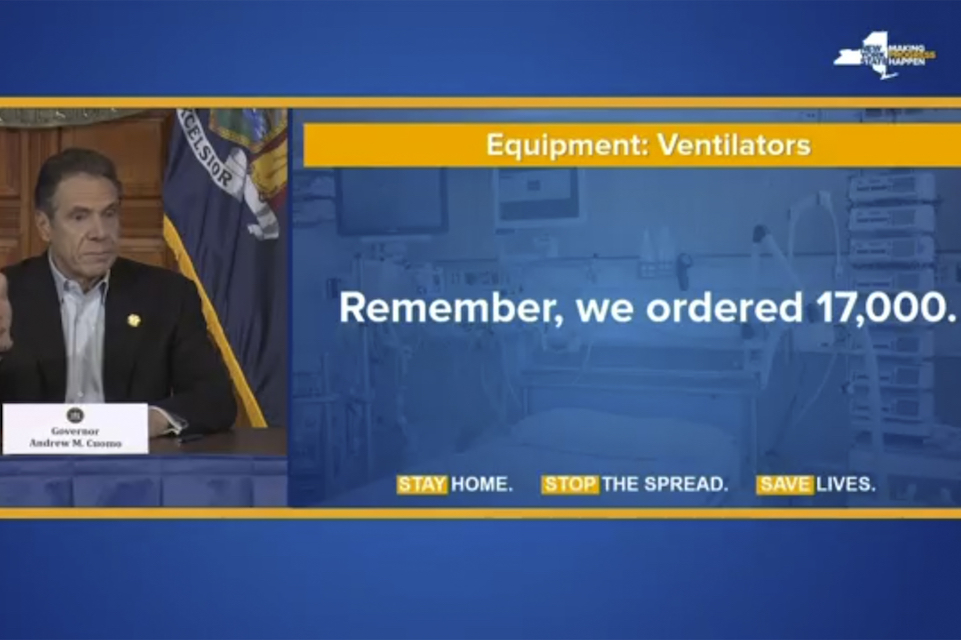 NEW YORK (AP) — New York is poised to get over 1,100 ventilators from China and Oregon as it scrambles to line up more breathing machines for the sickest coronavirus patients, Gov. Andrew Cuomo said Saturday.

The Chinese government facilitated a 1,000-ventilator donation from billionaires Jack Ma and Joseph Tsai, the co-founders of the Chinese e-commerce giant Alibaba, Cuomo said. He said those ventilators were due to arrive Saturday, and the state of Oregon had volunteered to send 140 more breathing machines.

“It’s going to make a significant difference for us,” said the Democratic governor. Cuomo had said on Thursday that the state’s supply of ventilators would be exhausted in six days if the number of critically ill coronavirus patients kept growing at the current rate.

New York is the pandemic’s U.S. epicenter, with over 113,700 confirmed cases as of Saturday morning. More than 3,500 people statewide have died, and about 15,000 coronavirus patients are hospitalized. Over 4,100 are in intensive care — many, if not all, of them needing ventilators.

Governors around the U.S. have been pleading, competing and scouring the global marketplace for needed supplies, especially ventilators, to treat the sick. Cuomo said Saturday that New York at one point made purchase orders for 17,000 of the devices, but only 2,500 came through.

Cuomo announced Friday that he'd order a redistribution of hundreds of ventilators within New York, saying he wants upstate hospitals to lend 20% of their unused ventilators — an estimated 500 in all — to medical centers in the harder-hit New York City metropolitan area.

The governor said National Guard members would pick up ventilators across the state. National Guard spokesman Eric Durr said Saturday that the collection had not yet begun.

Cuomo's plan alarmed New York Republicans and some hospital leaders upstate. They said it would leave people in their areas vulnerable and pit the state's regions against one another.

The new coronavirus causes mild or moderate symptoms for most people. For some, especially older adults and people with existing health problems, it can cause more severe illness or death.

Flags at Westchester County buildings will be lowered to half-staff in honor of residents who have died of COVID-19, the disease caused by the virus.

County Executive George Latimer announced the plan Saturday, a day after New Jersey Gov. Phil Murphy made a similar move in his state. Both politicians are Democrats.