Dems Look to Michigan Primary as Testing Ground for November 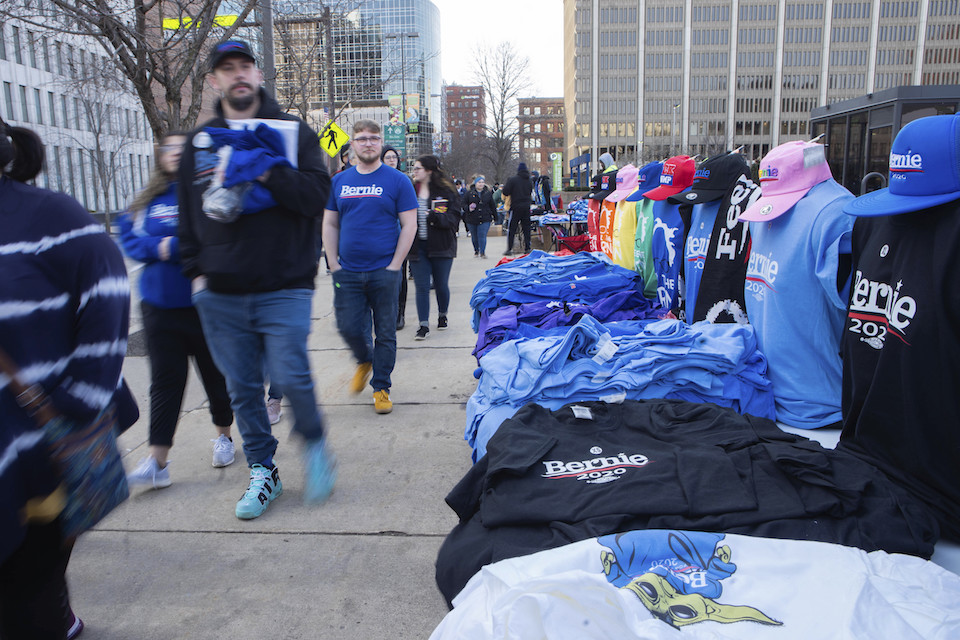 DETROIT (AP) — Ask Arlene Williams about President Donald Trump's promises to bring back auto industry jobs that have evaporated across Michigan and she'll point with irony to the Chevy Blazer.

General Motors is now remaking the iconic American SUV after a lengthy hiatus — but building parts of it in Mexico and elsewhere overseas.

“These are some of the staple brands and yes, they're back,” said Williams, 49, who works at a GM plant in Romulus, Michigan, southwest of Detroit. “They're just not being made in the U.S.”

The largest of six states voting Tuesday, Michigan could redefine a Democratic primary that has become a showdown between former Vice President Joe Biden and Vermont Sen. Bernie Sanders. But many voters are already looking ahead to November and whether Trump can again win in the state that perhaps more than any other catapulted him into the White House in 2016.

For Sanders, the stakes could hardly be higher. He defeated Hillary Clinton in Michigan in 2016, emboldening his argument that he could win with a diverse coalition that drew well from young voters, working-class whites and African Americans. But it is the kind of victory he has not been able to replicate so far this time, and if he does not on Tuesday, any chances at the Democratic nomination may be greatly diminished.

Biden has been emphasizing the Obama administration's bailout of the auto industry, which provided an economic lifeline for GM and Ford, likely saving thousands of jobs. He is also counting on continued strong support among African American voters.

How Michigan votes will also be clarifying for November. Some see Sanders' sweeping promises to cancel student debt and provide health care for all potentially energizing young voters but not older ones wary of his democratic socialist ideology. Centrist and safe, Biden could do exactly the opposite, though.

Others worry that both candidates are taking black Democrats for granted. All that may add up to neither being able to carry the state against Trump.

“There's not a lot of energy, not enough energy, I would say, even for the primary," said Michigan state Rep. Sherry Gay-Dagnogo, whose district includes a large swath of northwest Detroit. She said the Democratic Party continues to use the same playbook of waiting until the last minute to do intensive community outreach — which crippled it in 2016.

Can Dems persuade black voters to turn out?

Indeed, major party turnout in Wayne County, which encompasses Detroit and is strongly African American, fell by more than 64,000 votes in 2016 as compared to 2012. That's especially important since Trump leveled the Democrats' famed “blue wall” with narrow wins in states that were supposed to comfortably go to Hillary Clinton: Pennsylvania, Wisconsin and Michigan, which he won by just 10,704 votes out more than 4.8 million cast.

Tuesday will be the first test of Democrats' ability to take them back.

They already can point to hopeful signs. Gov. Gretchen Whitmer, who has endorsed Biden and been mentioned as a possible vice presidential pick, won in 2018, as fellow Democrat and Sen. Debbie Stabenow was cruising to re-election.

Flipping the state back could be built on gains in places like Grand Rapids, childhood home of Gerald Ford and long the epitome of country club Republicans, often most interested in fiscal conservatism but also closely watching social issues.

Sanders staged a rally Sunday in Grand Rapids and — vowing to grow the Democratic electorate by winning over young, minority and working-class voters — hit the University of Michigan and blue-collar Flint and Dearborn, home to a large concentration of Arab Americans. It is a promise he has made in other states during the primaries, but so far has largely failed to deliver.

“I am more than aware that Trump in 2016 won the state of Michigan by a small vote," Sanders said. “I do believe the people of Michigan aren’t going to make that mistake again.”

Sanders canceled a planned trip to Mississippi to spend more time in the state this past weekend. But he has struggled to broaden his appeal with black voters, as evidenced by Biden's wipe-out win in South Carolina and across many other Southern states on Super Tuesday.

Activist Monica Lewis-Patrick, president and CEO of We the People Detroit, said the eventual nominee will need a strong ground game in Detroit to prevent the same mistakes the party made in 2016, when the black community felt largely unseen and ignored. She has endorsed Sanders.

Citing the ongoing water crisis in Flint and Detroit's aggressive water shutoff campaign that has disrupted service for 100,000-plus residential accounts across the city since 2014, Lewis-Patrick said the party needs to speak to issues that are impacting lives on a daily basis.

“We've told every candidate before we got down to the final two that we noticed in the debates when they came to Detroit that was missing from the conversation," she said, referring to when the city hosted Democratic presidential debates last summer. "What we're seeing is that many campaigns are treating black and brown communities as sort of a drive-by vote.”

Sanders has spoken to Flint's water problems and the shutoff issue, asking with exasperation, “How is it possible” that people in parts of the state "don’t have water coming out of the tap?”

In an attempt to shore up its position no matter who wins the nomination, the Michigan Democratic Party has had staff on the ground since 2017 in “pivot” counties that supported Obama in 2012 but went to Trump last presidential cycle. It also has led campaigns highlighting Trump's “broken promises" when it comes to issues like restoring lost manufacturing jobs.

Still, Gay-Dagnogo said that, though the state Democratic Party opened 15 offices around Michigan, ”it's no secret" Trump's reelection campaign has stood up its own operations in the same areas.

“I think sometimes we just wait for something magical to happen, opposed to making sure that there are financial resources in the community to get people out," she said.

Trump, meanwhile, has visited Michigan several times as president and points to a strong national economy as proof he kept his kept his promises to restore the state's lost jobs.

Manufacturing jobs in Michigan grew from 616,800 when Trump took office to 628,900 last December, according to the Bureau of Labor Statistics. But some counties that Trump won have experienced job losses, and the state faces the prospect of further downturns as coronavirus reverberates through the economy.

While top union leaders have lined up to support either Biden or Sanders, many of their rank-and-file members continue to back Trump because of his views on social issues like guns and abortion.

“A number of union households who voted for Trump and voted against their own economic interests, I think, may do that again,” said Matt Vitiote, Democratic Party chairman in Monroe County near the Michigan-Ohio border, which twice supported Obama but voted for Trump in 2016.

Williams, who noted the Chevy Blazer's international flavor, is backing Sanders and his promise to strengthen union membership nationwide. She concedes that Michigan's economy has grown under Trump but hopes it won't be enough for him to win the state again.

“I don’t see that there has been real growth in higher-paying jobs,” Williams said. “There have been jobs created, but they’re low-paying jobs and you’ve got to have two or three of them in order to raise your family.”