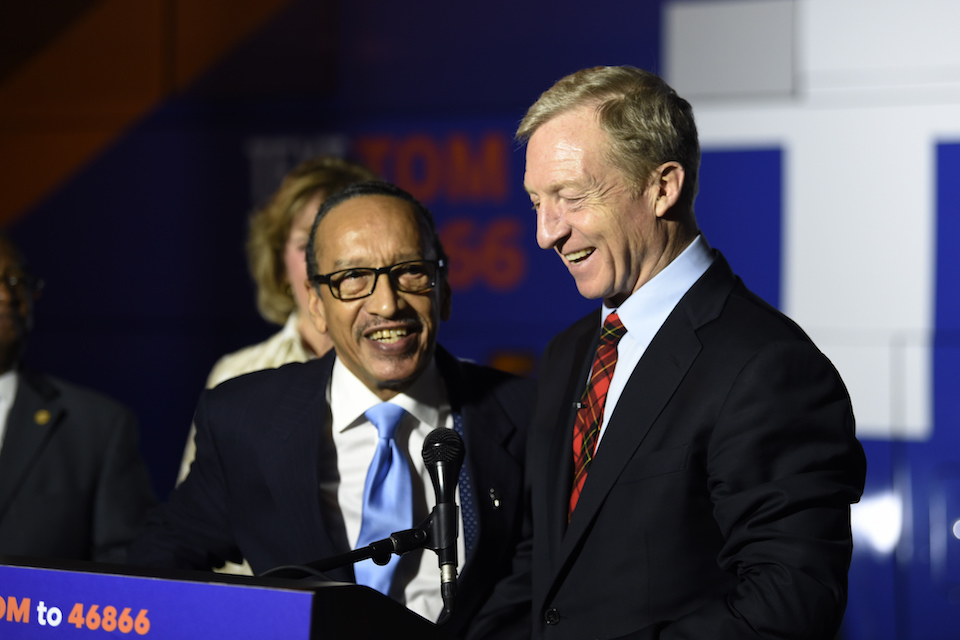 Billionaire presidential candidate Tom Steyer is making a big pitch for Black votes in the South Carolina Democratic primary, saying he supports slavery reparations for African-Americans. It's a state Biden expects to win and he's hoping for a big victory, while Sanders is looking to pick up support from young African American voters.

The other contenders for the Democratic nomination will also be fighting to make their cases to the voters. The South Carolina primary is a cliffhanger all right.

Steyer, a former hedge fund manager from California, has released a policy on African Americans and racial justice and his ads are flooding the airwaves in South Carolina.

“The 246 years of free labor from the arrival of the first slave ship to the abolishment of slavery with the ratification of the 13th Amendment, and the subsequent decades of oppression made the United States the most economically prosperous country in the world.

“Tom supports the Commission to Study and Develop Reparation Proposals for African- Americans Act, to tell the truth about the impacts of slavery and Black life, to analyze its lasting effects, and determine how to provide redress for the centuries of forced free labor, oppression, rape, torture, and murder inflicted upon African-Americans.”

Sixty percent of South Carolina voters are black and the state is considered crucial in deciding who will win the Democratic nomination.

The outcome will become clear after the state’s primary Saturday (February 29). 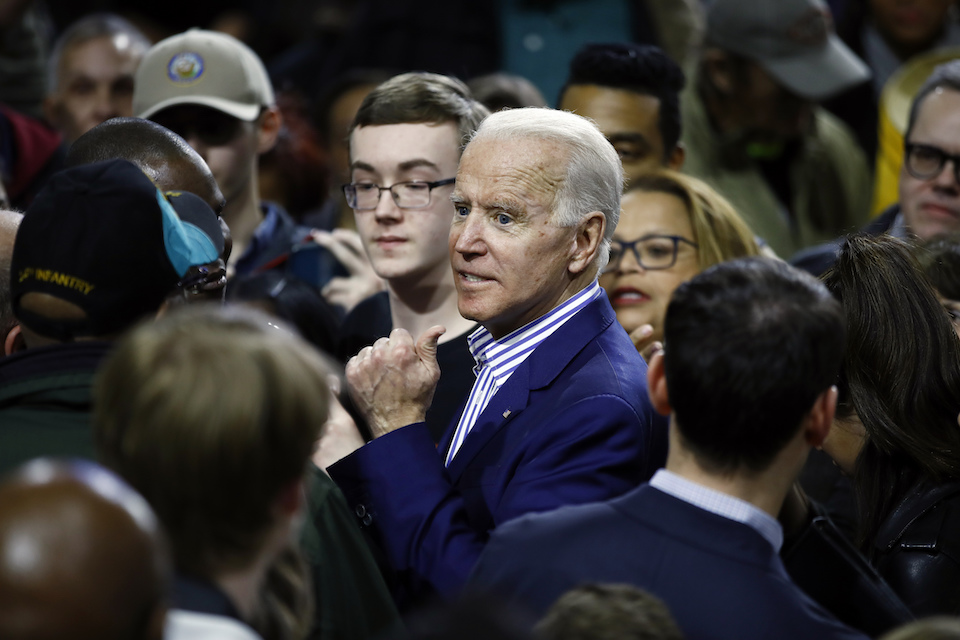 Biden confident of a win

It will be the first primary to be held in the South, and Joe Biden remains confident that his popularity with black voters will seal him a victory and help blunt some of front-runner Bernie Sanders' momentum. Listen to 'The Daily' podcast on the South Carolina election.

There were no early reports of voting problems after polls opened across the state at 7 a.m. The primary stands as the first marker on a critical four-day stretch that will help determine whether the party rallies behind the current frontrunner, Bernie Sanders or embraces a longer slog that could carry on until the national convention.

“Only two things are going to happen: either Bernie or brokered,” said James Carville, a veteran Democratic strategist.

Carville is uncomfortable with a Sanders nomination but fears that a brokered convention — in which party bosses or delegates in floor fights and negotiations decide the nominee after no candidate amasses enough delegates in the primary — would inflict serious damage on the party, as well.

“It’s just hard for me to see beyond the two options," he said.

In Saturday's primary, Biden and his establishment allies hope to slow Sanders' rise — and change the trajectory of the race — with a convincing victory demonstrating his strength among African Americans.

Visiting a polling place in Greenville early Saturday, Biden said he felt good about his prospects.

“It’d be a good start to get into Super Tuesday and do really well," Biden told reporters.

After two consecutive victories and a tie for the lead in Iowa, the 78-year-old Vermont senator's confidence is surging.

Sanders to campaign in Warren and Klobuchar's heartlands

Sanders will spend the lead-up to Super Tuesday campaigning in the home states of two major Democratic rivals, betting he can score a double knockout blow — or at least limit the size of their victories.

Senior adviser Jeff Weaver said Sanders is aggressively hunting for delegates, noting that their campaign's experience during the 2016 primary against Hillary Clinton taught them that any candidate who finishes Super Tuesday with a significant delegate advantage will be difficult to catch.

“I’m confident we’re going to do very, very well across the country," Weaver said of the coming four days.

He also sought to downplay the importance of South Carolina, where “Biden is expected to win.”

“Expectations can be broken,” Weaver added.

”But for the vice president, he needs an extraordinarily large win in South Carolina in order to convince folks he’s going to be able to go the distance."

Not a two-person race

At a rally in North Charleston on Friday, Trump asked the crowd whether Biden or Sanders would be the better Democratic opponent for him.

Some state GOP leaders have even urged Republican voters to participate in Saturday's Democratic primary and vote for Sanders.

Yet the Democrats' 2020 primary election is far from a two-person race.

In South Carolina, billionaire activist Tom Steyer has spent more than $19 million on television advertising — more than all the other candidates combined — in his quest for his first top finish in four contests.

Not ceding anything, Pete Buttigieg is fighting to prove he can build a multiracial coalition.

And with the help of super PACs, Warren and Klobuchar have vowed to keep pushing forward no matter how they finish on Saturday.

New York billionaire Mike Bloomberg is not competing in South Carolina, yet he has shattered spending records after investing hundreds of millions of dollars in Super Tuesday advertising backed by a horde of paid staff in virtually every state in the nation.

He could emerge as the strongest Sanders alternative in the coming days, or he could unintentionally help Sanders by splitting up the anti-Sanders vote.

The former vice president's campaign began the week cautiously optimistic, even as he predicted victory and began lashing out at Sanders more aggressively.

"This nation isn’t looking for a revolution like some folks are talking about,” Biden said Friday in Sumter, slapping at Sanders’ signature call to action.

After a solid debate performance on Tuesday, the 77-year-old Democrat was more buoyant on the campaign trail and his aides grew more confident backed by new support from elected officials.

Biden has racked up far more endorsements than his rivals have throughout the year, and he added another big name from a Super Tuesday state, Virginia Sen. Tim Kaine, on Friday.

That came two days after he earned the endorsement of South Carolina Rep. James Clyburn.

Summing up the mood, senior Biden adviser Symone Sanders shifted away from calling South Carolina Biden’s “firewall” and instead called it a “springboard,” on par with how the state boosted the presidential aspirations of Barack Obama in 2008 and Clinton in 2016.

Who can excite black voters?

Indeed, South Carolina represents much more than the fourth state on the Democrats' monthslong primary calendar.

It serves as the first major test of the candidates' strength with African American voters, who will play a critical role in both the general election and the rest of the primary season.

Roughly 3 in 10 people of voting age in South Carolina are black, according to census data.

“South Carolina speaks in a way that these other states have not been able to in terms of who is voting and the diversity of our vote," said James Smith, South Carolina's 2018 Democratic nominee for governor.

In the short term, Super Tuesday features a handful of Southern states, like Alabama, Arkansas and North Carolina, where the African American vote will be decisive.

And longer term, the ultimate Democratic nominee will struggle to defeat Trump unless he or she generates more enthusiasm among black voters than Clinton did four years ago.

Saturday's election in South Carolina marks the first statewide test of its new fleet of electronic voting machines, a $50 million upgrade from an old and vulnerable system that lacked any paper record of individual votes.

The new machines produce a paper record that can be verified by the voter and checked after the election to detect any malfunction or manipulation.

Support the candidate who wins

Meanwhile, some leading Democrats in South Carolina were concerned that the intensity of the anti-Sanders movement within their own party would undermine their quest to deny Trump a second term.

While she's on Steyer's payroll, she said she would “of course” support Sanders if he emerged as the nominee.

“As a black woman, I can’t afford for white folks' resentment to determine who the next president is or is not going to be,” she said.

“Their resentment doesn’t translate to the struggle and the hell that communities of color will continue to face -- and worse -- if Trump is reelected.”