Sanders Hopes Early Strength Will Prove He Can Beat Trump 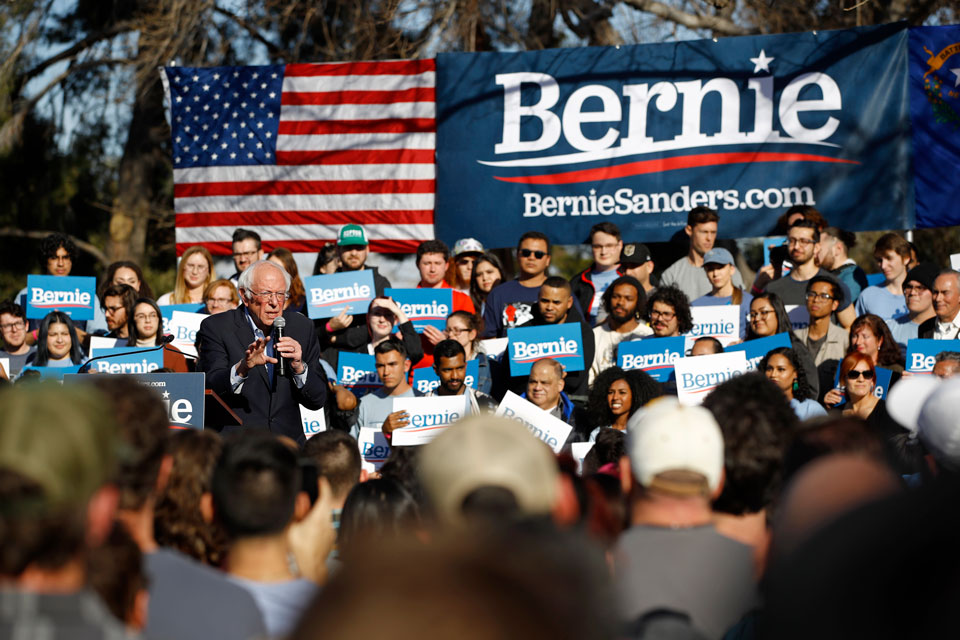 LAS VEGAS (AP) — Terry Reece has long been skeptical that voters would back Bernie Sanders, a 78-year-old self-described democratic socialist who is just months removed from a heart attack. Then the Vermont senator essentially tied for first place in the Democratic Party's Iowa caucuses and won its New Hampshire primary.

That forced Reece to rethink his assumptions about who can win the nomination. After months of leaning toward former Vice President Joe Biden, Reece filled out a preference card for Sanders during early voting this week in the Nevada caucuses.

"I think that people are kind of wanting to turn the pages and get more radical, or switch from the status quo," said Reece, a 62-year-old African American who owns a small media company in Las Vegas.

That's exactly the sentiment Sanders is counting on to carry him to victory in the battle to take on President Donald Trump. Since the early days of Sanders' second presidential campaign, he and his supporters have sought to allay concerns that he's a fringe candidate whose call for political revolution would doom the party to another humiliating defeat. The strong showing in Iowa and New Hampshire gives him fresh evidence to make that case.

Sanders faces high expectations in Nevada, which formally holds its Democratic presidential caucuses on Saturday. He has a strong organization and has generated enthusiasm among younger and Latino voters. But there are plenty of hurdles that could dent his confidence in the weeks ahead.

Former New York Mayor Mike Bloomberg is expected to use his debate stage premiere on Wednesday to attack Sanders' broad call for economic and political revolution as unworkable and too liberal for more mainstream voters who simply want to defeat Trump. Sanders hasn't fully united the party's liberal wing and was denied the most coveted union endorsement in Nevada. His trademark "Medicare for All" proposal could unnerve voters in both major political parties who worry about higher taxes and the loss of private health insurance.

And while Sanders has notched a win, he has yet to post a commanding victory. Pete Buttigieg, the 38-year-old former mayor of South Bend, Indiana, essentially tied with Sanders in Iowa and finished closely behind him in New Hampshire, a state the senator won by more than 20 percentage points in 2016.

Campaigning in Las Vegas on Tuesday, Buttigieg again raised questions about whether Sanders could unify the party against Trump.

"Sen. Sanders, I think, speaks to a lot of ideals that we all share," Buttigieg said. "But right now we need to make sure we're drawing as many people as we can into our coalition. And if the message goes out, 'Your choices are you either need to be for a revolution or you must be for the status quo,' I don't think most of us see ourselves in that picture."

But as the Democratic contest unfolds, many voters may see a win as a win and make their decisions accordingly, said Tim Miller, a former strategist with Jeb Bush's failed Republican presidential campaign in 2016.

"Voters want a winner," Miller said. "Voters want someone who can win in November, and there is a sheen that comes from winning primaries."

Miller is one of several analysts in both parties who see parallels between the Republican contest in 2016 and this year's Democratic primary. In both cases, a party outsider held a grip on a tight group of supporters while a bevy of centrists split the vote against him. As Trump kept scoring victories in the 2016 primaries, he eventually won backing from GOP voters who might not have liked him but were focused on defeating Democrat Hillary Clinton.

The question for Sanders, an independent senator from Vermont, is whether the party will similarly warm to him if he can pile up more victories. For now, much of the Democratic establishment thinks it's impossible for him to win the presidency during a growing economy. Some House Democrats are openly expressing concern that a Sanders nomination could cost the party control of that chamber.

Miller said that argument may not resonate with Democratic voters who, like Trump supporters, are increasingly skeptical of political institutions.

"A lot of voters have lost confidence in their ability to predict who will win," he said.

Sanders could have a challenging time finding a winning path against Trump. He is poorly positioned in the perennial swing state of Florida, with its older voters and population of Cuban immigrants, many of whom have a visceral dislike of socialism. It's unlikely that Sanders could flip growing Sun Belt states like Arizona, Georgia or Texas, because a Democratic victory in those places depends on both motivating the states' expanding minority populations and converting moderate white Republicans.

That leaves Sanders' clearest path through the trio of Rust Belt states that gave Trump his 2016 victory — Pennsylvania, Michigan and Wisconsin. Notably, Sanders has proposed banning fracking, which could be a liability in Pennsylvania, where the drilling process is a key part of the state's economy.

But Jeff Weaver, a senior adviser to Sanders, said the senator has routinely been underestimated by election handicappers.

"This electability thing has been greatly overblown by candidates who had a more traditional approach but haven't proved that electable," Weaver said.

"I do think the American people are hungry for someone who will take on the political and economic elite."

Weaver said Sanders wins about one-quarter of Republicans in his home state in Vermont and noted that he won 23 states in the long 2016 Democratic primary against Clinton. He identified rural Western states like Montana and the Dakotas as places a Sanders campaign could contest in the general election and added that Democratic gubernatorial candidates in the key Rust Belt states of Michigan and Wisconsin asked Sanders to campaign for them in 2016.

"Some of the moderates say, 'We've seen the polls and we want Bernie Sanders here in the general election,'" Weaver said.

Still, Sanders seems to be retooling his stump speech in ways that might ease concerns from some moderates. As he campaigned in Nevada over the past several days, he didn't call for political revolution or mention democratic socialism.

And when he attacks his rivals, Sanders is focusing less on ideological purity and more on what it will take to beat Trump.

"In order to win in November, we are going to need a multi-generational, multiracial campaign of energy and excitement that creates the highest voter turnout in American history," he said at the Clark County Democratic Party dinner on Saturday.

Then he turned to Bloomberg, the billionaire who is emerging as a centrist foil to Sanders.

"The simple truth is Mayor Bloomberg, with all of his money, will not create the sort of energy and excitement to have the voter turnout we must have to defeat Donald Trump," Sanders said.

That's resonating among his supporters. Jeanette Kano, an information technology worker in Las Vegas, knows plenty of Trump Republicans from growing up in Kansas.

"They say they would have voted for Bernie," she said.

She thinks Sanders can peel that sort of voter from the president.

Margaret Hines, a writer and artist in Reno, voted for Clinton in the 2016 primary but backs Sanders this time precisely because of the significant changes he's proposed.

"I don't think vanilla is going to do it this time," she said.

Associated Press writers Jonathan J. Cooper in Las Vegas and Scott Sonner in Reno, Nev., contributed to this report. Catch up on the 2020 election campaign with AP experts on our weekly politics podcast, "Ground Game."