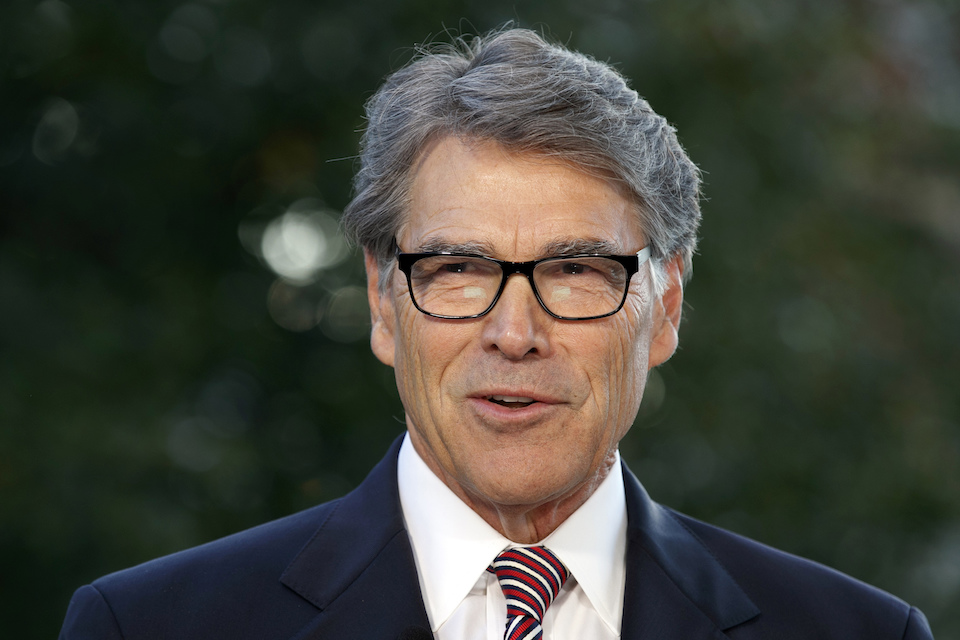 WASHINGTON (AP) — The "three amigos" used to stand for one thing in Washington — the pack of globe-trotting senators led by John McCain who brought American idealism to the world's trouble spots.

Now it refers to another trio, the Trump envoys who pushed Ukraine to pursue investigations of Democrats and former Vice President Joe Biden.

The shift represents more than the appropriation of a name. It also marks a departure from efforts by the late Arizona senator to build bipartisan alliances and further broad foreign policy ideals pursued by Republican presidents from Ronald Reagan to George W. Bush.

That approach is unrecognizable today as the GOP has become the party of Donald Trump and his "America First" approach.

"I knew the 'three amigos' and believe me, these are not three amigos like we were," said Joe Lieberman, the former Democratic, then independent senator from Connecticut who was part of the original group with Republicans McCain and Lindsey Graham of South Carolina.

Lieberman said he believes McCain, his longtime friend, would be "really upset about what's happening in Ukraine now." 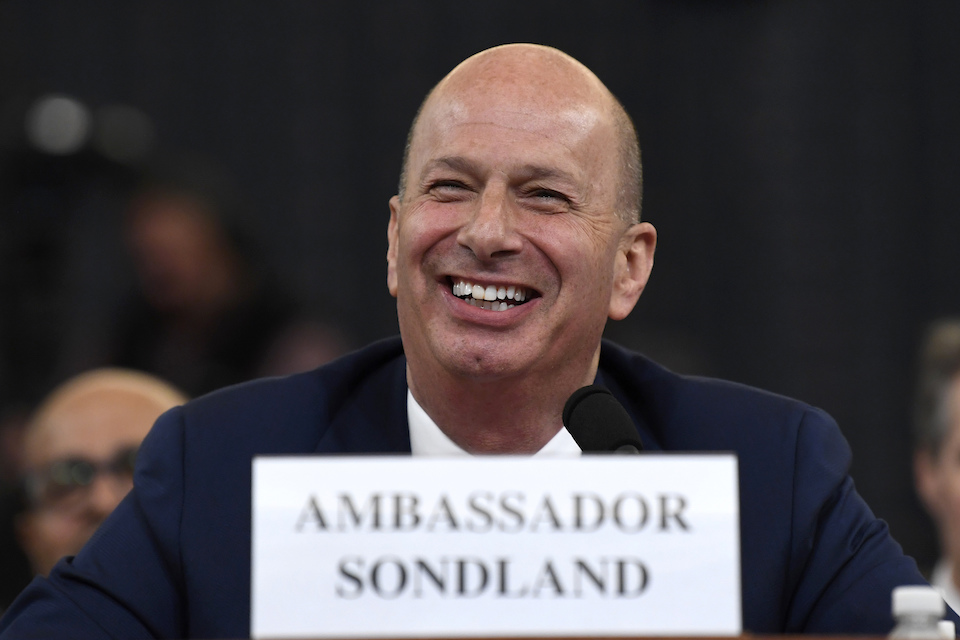 U.S. Ambassador to the European Union Gordon Sondland testifies before the House Intelligence Committee on Capitol Hill in Washington, Nov. 20, 2019. The “three amigos” used to mean just one thing in Washington -- the trio of globe-trotting senators led by John McCain who brought American idealism to the trouble spots of the world. Now, it refers to another trio, the Trump envoys pushing Ukraine to pursue investigations of Democrats and Joe Biden. (AP Photo/Susan Walsh, File)

Led by Trump's personal lawyer, Rudy Giuliani, the trio assembled as a loose contingent of envoys whose activities were initially unseen by others in the administration specializing in Ukraine issues. 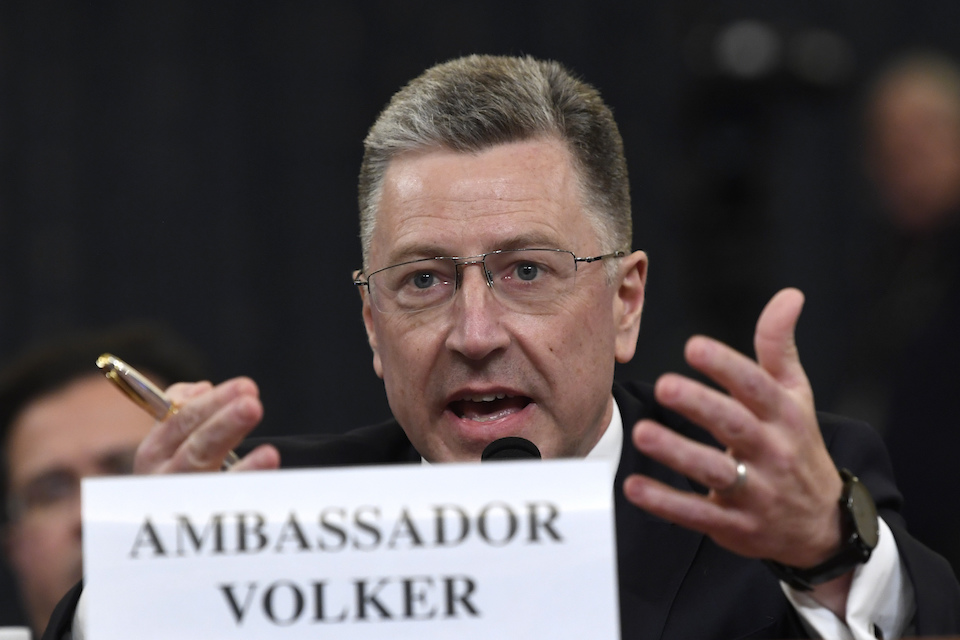 Ambassador Kurt Volker, former special envoy to Ukraine, testifies before the House Intelligence Committee on Capitol Hill in Washington, Nov. 19, 2019. The “three amigos” used to mean just one thing in Washington -- the trio of globe-trotting senators led by John McCain who brought American idealism to the trouble spots of the world. Now, it refers to another trio, the Trump envoys pushing Ukraine to pursue investigations of Democrats and Joe Biden.(AP Photo/Susan Walsh, File)

But as their actions became known, the ``amigos'' set off alarms among diplomats and officials who described them as pursuing the president's political agenda over U.S. national security interests.

Fiona Hill, a former Russia adviser to the White House, testified before the impeachment inquiry that at one point she confronted Sondland to ask on whose authority he was operating in Ukraine. The president, Sondland responded, according to Hill.

State Department official David Holmes testified that Sondland, Perry and Volker "styled themselves as the three amigos and made clear they would take the lead on coordinating our policy and engagement with for the Zelenskiy administration."

Holmes said that ``over the following months, it became apparent that Mr. Giuliani was having a direct influence on the foreign policy agenda that the three amigos were executing on the ground in Ukraine."

Aligning the US with autocrats

Presidents have often used back channels to facilitate foreign policy and leverage U.S. resources to achieve their policy goals, experts say. The difference is that Trump's approach, as outlined in the impeachment inquiry, appears to be mobilizing U.S. policy and resource for personal political gain.

The Ukrainian matter is but one way the foreign policy landscape has shifted dramatically in the Trump era.

As the White House pursues an "America First" agenda, the U.S. is seen as retreating from its traditional role of international engagement and democracy building and Trump is aligning himself with some of the world's more autocratic leaders, including Russian President Vladimir Putin.

Richard Fontaine, a former McCain national security aide who is now chief executive officer at the Center for New American Security, said the broader, bipartisan agreement on the U.S. role in the world has now become a "debate over fundamentals."

Fontaine said McCain's ``amigos'' believed that "when the U.S. could act for the betterment of people, it should act ... rather than trying to keep our nose out of things."

It was former Army Gen. David Petraeus who called McCain's group the "three amigos" as the senators made frequent visits to Afghanistan and Iraq.

They became the chief proponents of the troop increase that Bush proposed in 2006 and that Democrats and some Republicans derided as prolonging the unpopular war in Iraq.

But the trio also traveled broadly, including in Ukraine, where McCain repeatedly addressed democracy activists as the former Soviet state reached to the West.

Volker, who recently stepped down from his position at the McCain Institute at Arizona State University, distanced himself from his new title as one of Trump's amigos.

"Much has been made of the term 'three amigos' in reference to Secretary Perry, Ambassador Sondland and myself," Volker said in opening remarks before the impeachment inquiry.

"I never used that term — and frankly cringe when I hear it because for me, the 'three amigos' will always refer to Sen. John McCain, Sen. Joseph Lieberman, and Sen. Lindsey Graham, in reference to their work to support the surge in Iraq."

Brian Katulis, a national security expert at the Center for American Progress, said McCain's "amigos" are all but gone in the Trump era.

"They stood for a certain vision of America's role in the world — one that was more predictable and reliable — and one we don't have today," he said.

"That was certainly McCain's legacy," he said.

"Like a lot of things in the GOP, it's so far gone because Trump has obliterated a lot of the ideals."