Iranian General Warns US Against War as Tensions Rise 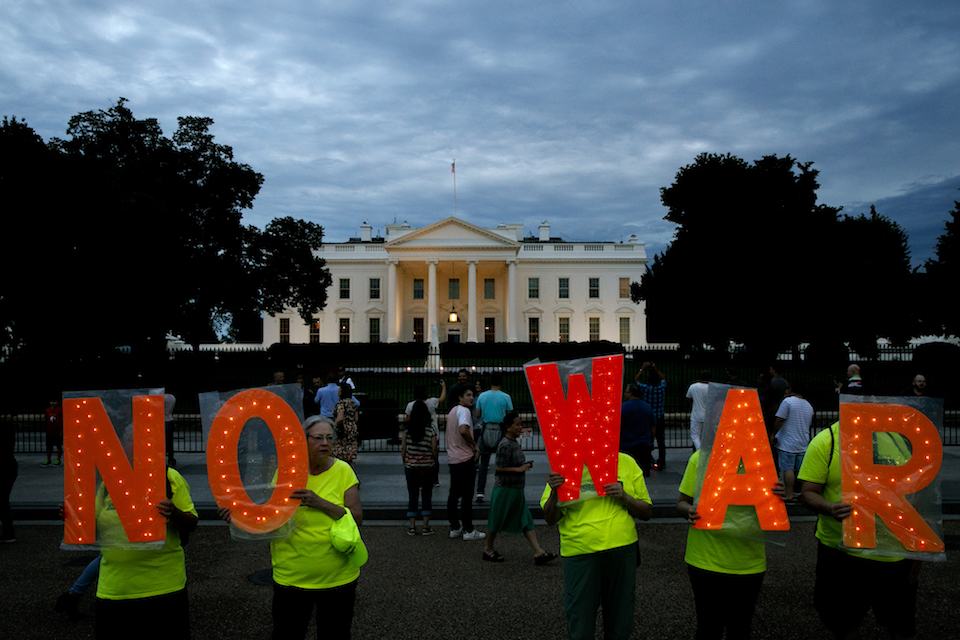 Iran (AP) — An Iranian military commander warned on Sunday that any conflict with Iran would have uncontrollable consequences across the region and endanger the lives of U.S. forces, as tensions between Washington and Tehran have flared after the downing of an American surveillance drone.

Maj. Gen. Gholamali Rashid made the remarks while addressing Iran's powerful Revolutionary Guards Corps during a field visit to a command center for Iranian radars and missile systems.

The general oversees and coordinates joint military operations in the Iranian Armed Forces.

"The U.S. administration should behave in a responsible way to protect the lives of American forces," he was quoted as saying in comments published by the semi-official Fars news agency.

Rashid said if war breaks out, the scope and duration of the conflict would be uncontrollable, and blamed any escalation on "U.S. interventionist policy."

His comments come as tensions were running high in the Persian Gulf as the Trump administration combines a "maximum pressure" campaign of economic sanctions on Iran with a buildup of American forces in the region.

The latest flareup came when Iran said it shot down the U.S. drone on Thursday and that it elected not to fire on a U.S. spy plane with a crew of over 30 people that was flying in the area at the same time.

President Donald Trump backed away from plans for a retaliatory military strike after learning 150 people would be killed. He said, however, such action is "always on the table until we get this solved."

He said "we very much appreciate" the decision by Iran's Revolutionary Guard not to shoot down the manned American aircraft. 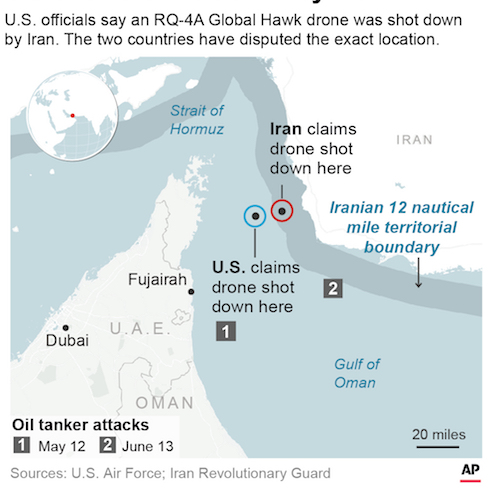 Protesters hold signs spelling out, "No War," outside the White House, Thursday June 20, 2019, in Washington, after President Donald Trump tweeted that "Iran made a very big mistake" by shooting down a U.S. surveillance drone over the Strait of Hormuz in Iran. (AP Photo/Jacquelyn Martin)

Also Sunday, and during an open session of Iran's parliament, lawmakers chanted "death to America" when acting parliament speaker Masoud Pezeshkian condemned what he said was the violation of Iranian airspace by the U.S. drone.

The chant dates back to before Iran's 1979 Islamic Revolution and remains a staple of hard-line demonstrations.

The regional tensions have prompted major international carriers to divert flight routes away from the Gulf of Oman and Strait of Hormuz.

Saudi Arabia's state airline Saudia was the latest carrier to announce late Saturday it is rerouting flight paths to some Asian destinations in order to avoid Iranian airspace.

The statement follows the U.S. Federal Aviation Administration's decision on Friday to bar U.S.-registered aircraft from operating over parts of the Persian Gulf.

Tensions between the U.S. and Iran are rooted in a decision by the Trump administration to withdraw from the 2015 nuclear deal between Iran and world powers.

Washington has also re-imposed sanctions, including on Iranian oil exports, aimed at crippling the country's economy and forcing policy changes.

The U.S. blames Iran for apparent attacks on six oil tankers in the Gulf of Oman in recent weeks, which Iran denies.

Iranian-allied rebels in Yemen have also recently launched attacks on a civilian airport in Saudi Arabia, a desalination plant and key oil pipeline in the kingdom.

The kingdom has been at war in Yemen against the rebels since 2015.