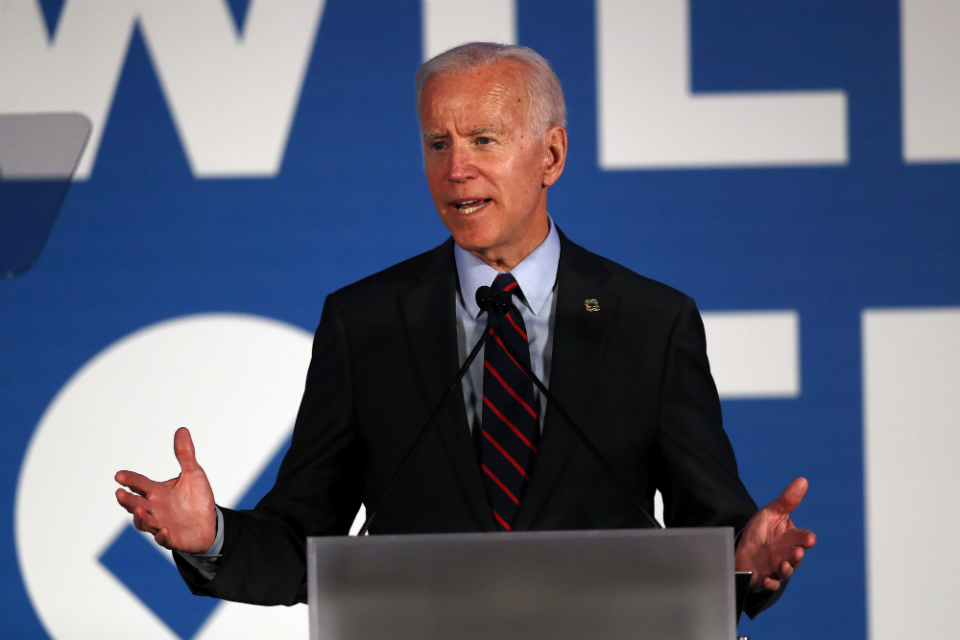 "If I believe health care is a right, as I do, I can no longer support an amendment" that makes it more difficult for some women to access care, Biden said at a Democratic Party fundraiser in Atlanta.

The former vice president's reversal on the Hyde Amendment came after rivals and women's rights groups blasted him for affirming through campaign aides that he still supported the decades-old budget provision. The dynamics had been certain to flare up again at Democrats' first primary debate in three weeks.

The Hyde Amendment: Another Abortion Barrier

Biden didn't mention this week's attacks, saying his decision was about health care, not politics. Yet the circumstances highlight the risks for a 76-year-old former vice president who's running as more of a centrist in a party in which some skeptical activists openly question whether he can be the party standard-bearer in 2020.

And Biden's explanation tacitly repeated his critics' arguments that the Hyde Amendment is another abortion barrier that disproportionately affects poor women and women of color.

I've been struggling with the problems that Hyde now presents

"I've been struggling with the problems that Hyde now presents," Biden said, opening a speech dedicated mostly to voting rights and issues important to the Black community.

A Roman Catholic who has wrestled publicly with abortion policy for decades, Biden said he voted as a senator to support the Hyde Amendment because he believed that women would still have access to abortion even without Medicaid insurance and other federal health care grants and that abortion opponents shouldn't be compelled to pay for the procedure. It was part of what Biden has described as a "middle ground" on abortion.

Now, he says, there are too many barriers that threaten that constitutional right, leaving some women with no reasonable options as long as Republicans keep pushing for an outright repeal of the Supreme Court's 1973 decision that legalized abortion nationwide.

The former vice president, who launched his 2020 presidential campaign in April, said he arrived at the decision as part of developing an upcoming comprehensive health care proposal. He has declared his support for a Medicare-like public option as the next step toward universal coverage. He reasoned that his goal of universal coverage means women must have full and fair access to care, including abortion.

A Planned Parenthood representative applauded Biden's reversal but noted that he has been lagging the women's rights movement on the issue.

"Happy to see Joe Biden embrace what we have long known to be true: Hyde blocks people — particularly women of color and women with low incomes — from accessing safe, legal abortion care," said Leana Wen of Planned Parenthood, the women's health giant whose services include abortion and abortion referrals.

Other activists accepted credit for pushing Biden on the issue.

"We're pleased that Joe Biden has joined the rest of the 2020 Democratic field in coalescing around the Party's core values — support for abortion rights, and the basic truth that reproductive freedom is fundamental to the pursuit of equality and economic security in this country," said Ilyse Hogue, president of NARAL, a leading abortion-rights advocacy group.

Repealing Hyde has become a defining standard for Democrats in recent years, making what was once a more common position among moderate Democrats more untenable, particularly given the dynamics of primary politics heading into 2020. At its 2016 convention, the party included a call for repealing Hyde in the Democratic platform, doing so at the urging of nominee Hillary Clinton.

"I am not clear that Joe Biden believes unequivocally that every single woman has the right to make decisions about her body, regardless of her income or race," said Democratic strategist Jess Morales Rocketto, who worked for Clinton in 2016. "It is imperative that the Democratic nominee believe that."

Republicans pounced, framing Biden's change in position as a gaffe.

He's just not very good at this. Joe Biden is an existential threat to Joe Biden.

A senior Biden campaign official said some aides were surprised at the speed of the reversal, given Biden's long history of explaining his abortion positions in terms of his faith. But aides realized that as the front-runner, the attacks weren't going to let up, and his campaign reasoned that the fallout within the Democratic primary outweigh any long-term benefit of maintain his previous Hyde support.

The official spoke on condition of anonymity to discuss internal conversations.

Biden's decadeslong position first gained new scrutiny several weeks ago when the American Civil Liberties Union circulated video of the candidate telling an activist who asked about the Hyde Amendment that it should be repealed.

His campaign later affirmed his support for his fellow Democrats' call for a federal statute codifying the Roe v. Wade abortion decision into law.