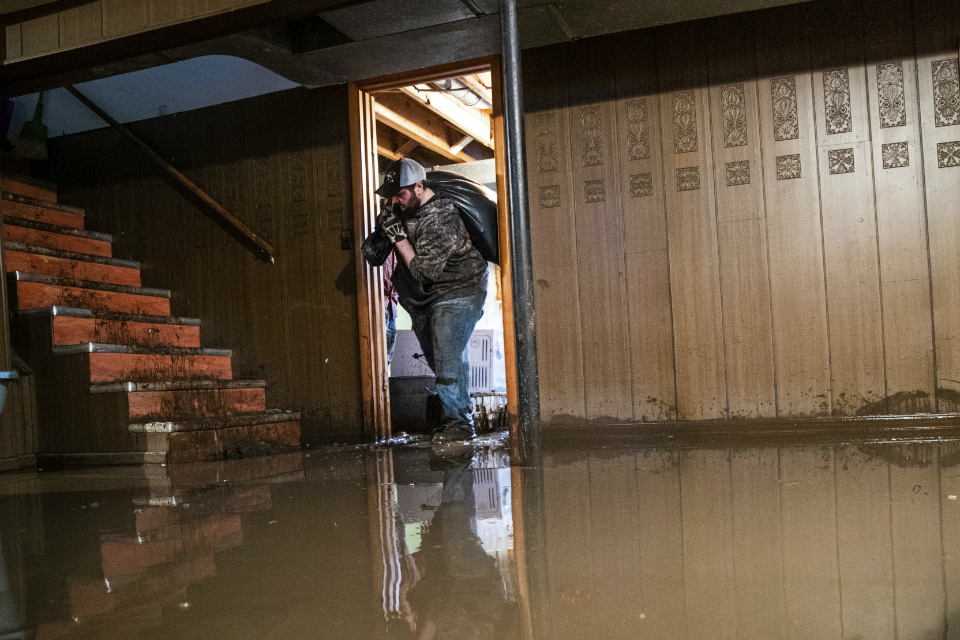 DES MOINES, Iowa (AP) — Farmer Jeff Jorgenson looks out over 750 acres of cropland submerged beneath the swollen Missouri River, and he knows he probably won't plant this year.

But that's not his biggest worry. He and other farmers have worked until midnight for days to move grain, equipment and fuel barrels away from the floodwaters fed by heavy rain and snowmelt. The rising water that has damaged hundreds of homes and been blamed for three deaths has also taken a heavy toll on agriculture, inundating thousands of acres, threatening stockpiled grain and killing livestock.

His calculation using local grain prices puts the financial loss at more than $7 million in grain alone. That's for about 28 farmers in his immediate area, he said.

Once it's deposited in bins, grain is not insured, so it's just lost money. This year farmers have stored much more grain than normal because of a large crop last year and fewer markets in which to sell soybeans because of a trade dispute with China.This Monday, March 18, 2019 photo taken by the South Dakota Civil Air Patrol and provided by the Iowa Department of Homeland Security and Emergency Management, shows flooding along the Missouri River in rural Iowa north of Omaha, Neb. (Iowa Homeland Security and Emergency Management via AP)

"The economy in agriculture is not very good right now. It will end some of these folks farming, family legacies, family farms," he said. "There will be farmers that will be dealing with so much of a negative they won't be able to tolerate it."

Jorgenson, 43, who has farmed since 1998, reached out to friends Saturday, and they helped him move his grain out of bins to an elevator. Had they not acted, he would have lost $135,000. 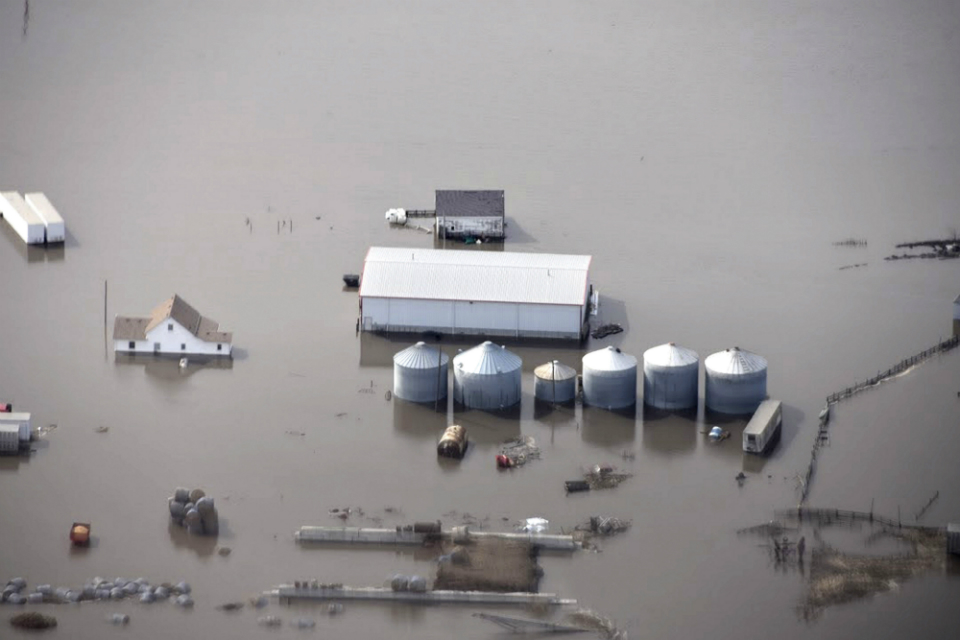 This Monday, March 18, 2019 photo taken by the South Dakota Civil Air Patrol and provided by the Iowa Department of Homeland Security and Emergency Management, shows flooding along the Missouri River in rural Iowa north of Omaha, Neb. (Iowa Homeland Security and Emergency Management via AP)Vice President Mike Pence surveyed flooded areas in Nebraska Tuesday, where he viewed the raging Elkhorn river, talked to first responders and visited a shelter for displaced people. He promised expedited action on presidential disaster declarations for Iowa and Nebraska.

"We're going to make sure that federal resources are there for you," Pence told volunteers at Waterloo, a town of less than 1,000 residents about 21 miles (34 kilometers) west of Omaha that was virtually cut off by the floodwaters.

The flooding is expected to continue throughout the week in several states as high water flows down the Missouri River. Swollen rivers have already breached more than a dozen levees in Nebraska, Iowa and Missouri, according to the Army Corps of Engineers.

The flooding, which started after a massive late-winter storm last week, has also put some hog farms in southwest Iowa underwater. The dead animals inside must be disposed of, Reynolds said.

The water rose so quickly that farmers in many areas had no time to get animals out, said Chad Hart, an agricultural economist at Iowa State University.

"Places that haven't seen animal loss have seen a lot of animal stress. That means they're not gaining weight and won't be marketed in as timely a manner, which results in additional cost," he said.

In all, Nebraska Farm Bureau President Steve Nelson estimated $400 million of crop losses from fields left unplanted or planted late and up to $500 million in livestock losses.

In a news release issued Tuesday, Gov. Pete Ricketts said there have been deadlier disasters in Nebraska but never one as widespread. He said 65 of the state's 93 counties are under emergency declarations.

In neighboring Missouri, water was just shy of getting into Ryonee McCann's home along a recreational lake in Holt County, where about 40,000 acres (16,188 hectares) and hundreds of homes have been flooded. She said her home sits on an 8-foot (2.5-meter) foundation.

"We have no control over it," the 38-year-old said. "We just have to wait for the water to recede. It's upsetting because everything you have worked for is there."

The Missouri River was forecast to crest Thursday morning at 11.6 feet above flood stage in St. Joseph, Missouri, the third highest crest on record. More than 100 roads are closed in the state, including a growing section of Interstate 29.

Leaders of the small northwestern Missouri town of Craig ordered an evacuation. The Holt County Sheriff's Department said residents who choose to stay must go to City Hall to provide their name and address in case they need to be rescued.

In nearby Atchison County, Missouri, floodwaters knocked out a larger section of an already busted levee overnight, making the village of Watson unreachable, said Mark Manchester, the county's deputy director of emergency management/911.

Officials believe everyone got out before thousands of more acres were flooded. But so many roads are now closed that some residents must travel more than 100 miles (160 kilometers) out of their way to get to their jobs at the Cooper Nuclear Station in Nebraska, he said.

"It's a lot harder for people to get around," Manchester said.

River flooding has also surrounded a northern Illinois neighborhood with water, prompting residents to escape in boats. People living in the Illinois village of Roscoe say children have walked through floodwaters or kayaked to catch school buses.

Flooding along rivers in western Michigan has damaged dozens of homes and businesses.