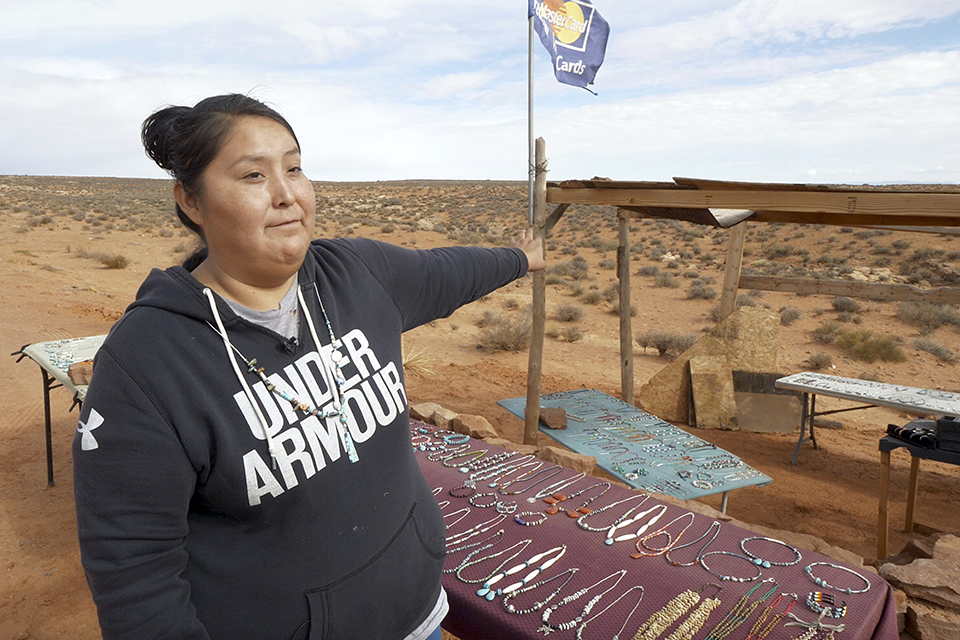 MONUMENT VALLEY, Utah (AP) — Tammie Nakai lives under a vista of red-rock spires and purple sunrise sky that offers arguably some of the United States' most breathtaking views. But her home lacks what most of the country considers basic necessities: electric lines and running water.

"It's been that way my whole life, almost 31 years," she said at the jewelry stand she and her husband run with pride in Monument Valley, a rural community near the Utah-Arizona border where tourists stand in the highway to re-create a famous running scene from "Forrest Gump."

As she decides how she'll cast her ballot, Navajo voters like Nakai could tip the balance of power in their county on Nov. 6. It's the first general election since a federal judge decided racially gerrymandered districts illegally minimized the voices of Navajo voters who make a slim majority of San Juan County's population. The county overlaps with the Navajo Nation, where people face huge disparities in health, education and economics. About 40 percent lack running water in their homes.

The race highlights the simmering tensions between Native Americans and white residents who live across the San Juan River on ranches and in towns laid out in neat grids by Mormon settlers. Though county leaders acknowledge the historical inequities Navajo people face, they say those issues go far beyond their reach.

Willie Grayeyes disagrees. After a fight to get on the ballot, the Democratic County Commission candidate is running in a new district and wants to help address needs like basic utilities and neglected dirt roads that tear up buses and can wash out in storms, keeping students out of school.

Overlapping county, federal and tribal governments mean it's not always clear who is responsible for any given problem. But if Grayeyes wins, the county's governing body will be majority Navajo for the first time.

"I want to sit at the table ... rather than, 'There's an Indian sitting over there. Let's see what he says,'" he said at a meeting last week. "Long term, I want to change the things, the beliefs that separate us — dominant society vs. Native American communities."

Tribes also have been fighting for increased access to the ballot box in Nevada, Alaska and North Dakota, where a U.S. Supreme Court decision last month allows the state to keep requirements that Native Americans said were discriminatory.

Utah's San Juan County is a southwestern landscape of rolling green sage and red mesas that covers an area nearly the size of New Jersey. It includes Monument Valley and a handful of other primarily Democratic communities on the Navajo Nation, which also sprawls into Arizona and New Mexico. The county's larger, mostly non-Native towns of Blanding and Monticello are heavily Republican.

The county faced a voting-rights case in the 1980s, and more recently a federal judge decided its three commission districts were drawn so only one member would be Navajo. The county is appealing that ruling as unfair to Blanding voters.

Grayeyes is running in a new, 65 percent Navajo district against Kelly Laws, a Republican former Blanding city councilman whose son is the county attorney. It's the county's only contested commission race this year. Laws didn't return messages from The Associated Press seeking comment.

A Grayeyes win would also change the county's position in the still-fresh debate over Bears Ears National Monument, land that tribes consider sacred.

Many of the county's non-Native residents were angry when President Barack Obama created the monument. They argue the added protections on 2,100 square miles (5,400 square kilometers) were too broad and closed the area to energy development. They cheered President Donald Trump's decision to downsize Bears Ears by about 85 percent.

"It's been very divisive," said Bruce Adams, the commission's Republican chairman, who is running unopposed for another term.

He acknowledges the steep contrast between life in his hometown and conditions on the Navajo Nation, but said it's wrong to lay all the problems at the feet of county government.

"We've tried to treat these people just like we treat everyone in San Juan County. They're no different to us than any other citizen," Adams said.

Navajos in the county do face unique challenges getting to the ballot box. Many homes lack traditional street addresses, and with few jobs on the reservation, people travel frequently for work. Navajos went to court after a switch to vote by mail, saying it made it harder to receive ballots through unreliable mail service and for elderly Navajo-language speakers to read them.

Elections officials have worked to address those obstacles, but Navajo leaders remain skeptical.

The road to Grayeyes' candidacy also went through federal court. The county disqualified him from the ballot after the clerk decided he lived outside the district. Grayeyes fought back, noting he has been registered to vote there for decades.

A federal judge sided with him, finding the county clerk wrongly backdated the complaint from a would-be rival for the seat.

Outgoing San Juan County Commissioner Phil Lyman sees that ruling as part of the county's ongoing struggle against the federal government, which owns most of the land in the county. Lyman became a figure in the states' rights movement when he was convicted of a misdemeanor after leading a protest ATV ride through a closed canyon.

"It's intended to break the county," said Lyman, who's running for a state legislative seat. "This paternalistic management of Native Americans, it's a concept whose time has way past. But to turn it and say San Juan County is the author of that is the hugest disservice."

Instead, he and Adams say federal and tribal leaders have let Utah Navajos down.

But Kenneth Maryboy, a Navajo running unopposed for another commission seat, said the county could and should do more.

"If we have two Native Americans in there .... that would be leverage to make things happen," he said.

Navajo voter Julie Ann Holiday is glad to see more Native Americans on the ballot. She and her husband live in a traditional Navajo hogan, a circular, one-room dwelling with a wood stove and dirt floor. It has no water tap and is serviced by a plywood outhouse. It was originally built to host ceremonies for her father, who died after years of working in nearby uranium mines.

Growing up, Holiday often rode 70 miles (113 kilometers) to school in Blanding. The schools are closer to reservation homes now, after Navajos filed a lawsuit against the county. Holiday earned her master's degree online from her hogan, after convincing tribal electricity officials to hook up a satellite dish outside.

She loves both cultures that intersect at her home but sometimes feels caught between two worlds.

"We're right on the edge of the Navajo Nation and San Juan County. You don't know which way to turn," she said. "We've come a long way to get what we need. We just worked hard for it."