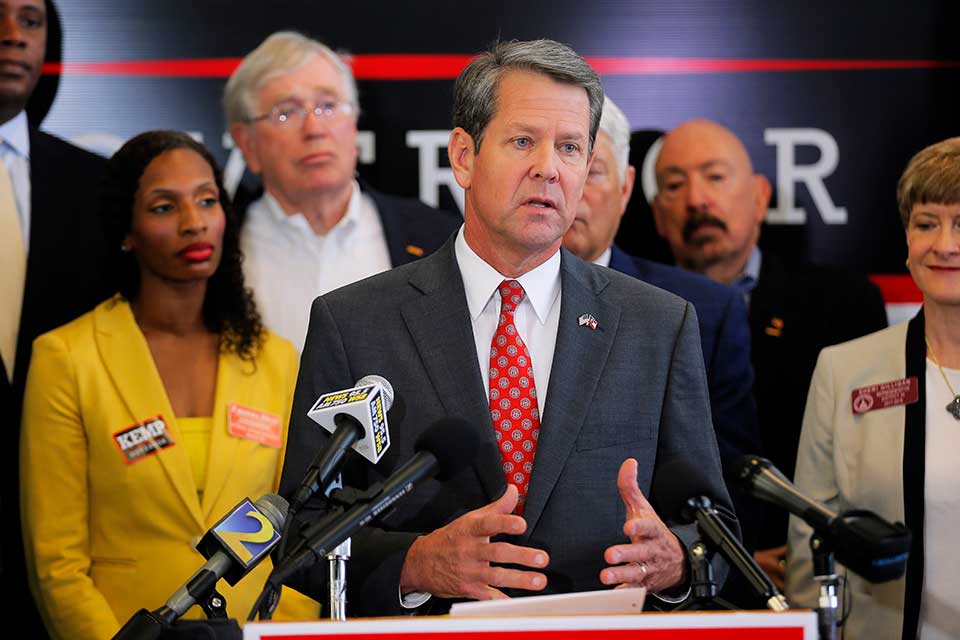 WASHINGTON, D.C. – On Oct. 11, the Lawyers’ Committee for Civil Rights Under Law and its partners filed a major lawsuit against Secretary of State Brian Kemp over the state of Georgia's discriminatory and unlawful "exact match" voter suppression scheme. The suit alleges that Georgia’s ‘no match, no vote’ voter registration scheme violates the Voting Rights Act, the National Voter Registration Act, and the First and Fourteenth Amendments to the United States Constitution.

Similar to Schemes Prior to the Voting Rights Act of 1965

“Georgia Secretary of State Brian Kemp has been a driving force behind multiple voter suppression efforts throughout the years in Georgia," said Kristen Clarke, president and executive director of the Lawyers’ Committee for Civil Rights Under Law. "If there is one person in Georgia who knows that the 'Exact Match' scheme has a discriminatory impact on minority voters, it's Brian Kemp because we successfully sued him over a mirror policy in 2016. There exists a stark parallel between the voter suppression schemes levied by states around the country prior to the Voting Rights Act of 1965 and the insidious tactics used by Secretary Kemp to capitalize on the Supreme Court’s decision in Shelby County to gut the Act and its protections for African Americans and other people of color that came with it. No less than 70 percent of people impacted by 'Exact Match' are African-American. We will continue fighting voter suppression to ensure a level playing field for voters across Georgia this election cycle.”

As a result of the “exact match” voter-registration protocol, which is being implemented by Georgia Secretary of State Brian Kemp, more than 53,000 voter registration applications have been placed in “pending” status one month before the midterm election. The vast majority of those pending applications are from minority voters. The federal lawsuit asks that a court prohibit the purging of any voters based on the ‘exact match’ protocol and ensure that all ballots cast by voters flagged as ‘non-matches’ are counted in future elections.

'No Match No Vote' History

Secretary Kemp has long endorsed and repeatedly used the ‘exact match’ protocol, which has been previously shown to have a high error rate and a substantial, negative impact upon voting-eligible African American, Latino and Asian American Georgians. The Lawyers’ Committee for Civil Rights Under Law and other civil rights organizations successfully challenged the use of ‘no match, no vote’ prior to the November 2016 election, resulting in the restoration of more than 40,000 voters to the rolls.

Under the Georgia law, applicants are removed from the registration rolls after 26 months if they do not cure the “no-match” result. The matching protocol delays the processing of complete and accurate voter registration applications and will cause many to be rejected after the 26-month window passes, resulting in the disenfranchisement of legitimate, voting-eligible Georgians. The notice provided by election officials is vague and often confused with junk mail, meaning that voters are frequently unaware that there is an issue with their registration status.

Voter registration application is flagged and placed in “pending” status if the information on their registration form does not exactly match information contained in the Department of Driver Services or Social Security Administration databases. A non-match can result from something as simple as an election officials switching two numbers in the applicant’s driver’s license number, adding or removing a hyphen from a name, or changing a voter’s maiden name. The matching process also incorrectly flags U.S. citizens as non-citizens, even where the applicants submit a copy of their U.S. naturalization certificate or other evidence of their U.S. citizenship with their applications.

Nearly every other state treats failure to match a database differently than Georgia. In the case of a mismatch, the voter is still fully registered. First-time voters are required to show a form of identification at the polls when they vote for the first time. This process provides the same amount of election security and imposes less barriers to voters.

“Georgia’s ‘exact match’ protocol has resulted in the cancellation or rejection of tens of thousands of voter registration applications in the past. The reintroduction of this practice, which is known to be discriminatory and error-ridden, is appalling,” said Danielle Lang, senior legal counsel, voting rights and redistricting at CLC. “This policy adds nothing to the security of Georgia elections but causes unnecessary confusion and additional burdens for eligible citizens who wish to exercise their fundamental right to vote.”

"In 2016, we helped stop Georgia's ‘exact match’ protocol that kicked thousands of voters off the voter rolls—some of them simply because they have uncommon Asian or Latino names that others commonly misspell,” Phi Nguyen Litigation Director, Asian Americans Advancing Justice – Atlanta. “It is unacceptable that only two years later, we are once again asking a court to step in to end an almost identical ‘exact match’ protocol that threatens to disenfranchise thousands more from our communities."

“I am appalled at the actions of the Secretary of State office; over 70% of the pending applicants are minorities,” said Phyllis Blake, President of the Georgia State Conference of the NAACP. “I hope that the Secretary of State’s expeditiousness follow up to correct these pending applications, whether the problem exists within the database, SOS office, County Voter Registration office or applicant, find it and fix it to allow the voter to fulfill the precious right to vote. The NAACP, GSC will continue to monitor this situation and request full transparency in yet another GA Voter Suppression Tactic attempt.”

“It’s a stain on our system of democracy when less than a month before an election which could produce the first African-American female governor in our nation’s history, we are seeing this type of voter suppression scheme attempted by a state official whose candidacy for the governorship produces an irremediable conflict of interest," said NAACP President and CEO, Derrick Johnson. “We are closely monitoring this situation with our Georgia State Conference President Phyllis Blake and demanding a complete investigation and full transparency prior to the election."

“The exact match process has a discriminatory impact on minority voters. It creates further barriers for U. S. citizens attempting to exercise their right to vote,” said Jerry Gonzalez, Executive Director of Georgia Association of Latino Elected Officials (GALEO). “We do hope the court will step in and allow these voters the right to vote while striking down this discriminatory process.

“The right to vote is central to our democracy,” said Villa Hayes, Senior Pro Bono Counsel at Hughes Hubbard & Reed.

“Democracy works best when all citizens can vote and we are proud to be an active participant in voter protection.”

“The Exact Match law continues to be a tool of voter suppression. Every year, thousands of Georgians are denied their right to vote due to clerical/administrative errors,” said Tamieka Atkins, Executive Director for Pro Georgia. “This year, 53,000 people are being negatively affected. If you are on the pending list, you can still vote. You must show photo identification at the polls that closely resembles the name you used to register to vote. If you're not sure if you're on the pending list, visit the My Voter Page to check your status or call ProGeorgia at 4045833871 and we can assist you.”

On July 18, 2018, voting rights advocates sent a notice letter to Georgia Secretary of State Brian Kemp, advising him that the enactment and implementation of the voter registration provisions of Georgia Act 250 (O.C.G.A. § 21-2-220.1), which codified a ‘no match, no vote’ voter registration protocol, violate Section 8 of the National Voter Registration Act, and requesting that Secretary Kemp immediately cease enforcement of the Georgia law or risk facing a new legal challenge to the law in federal court.

Given recent news reports, it is important to note that many voters on this “pending” list for “exact match” issues are entitled to vote a regular ballot in person at the polls if they show Georgia voter photo ID. It is possible, however, that some may have to present proof of citizenship to a deputy registrar and that others will not be able to vote by mail or may have their vote by mail ballots rejected because Georgia absentee ballots do not require photo ID. Voters with questions can call Election Protection at 866-OUR-VOTE.

The Lawyer's Committee for Civil Rights Under Law filed its lawsuit on Oct. 11 along with its partners including Campaign Legal Center, Hughes Hubbard & Reed LLP, Asian Americans Advancing Justice – Atlanta and the Law Office of Bryan Sells. The suit was filed on behalf of the Georgia State Conference of the NAACP, the Georgia Coalition for the Peoples’ Agenda, Asian Americans Advancing Justice – Atlanta, ProGeorgia State Table, Georgia Association of Latino Elected Officials, and the New Georgia Project.