Trump Lashes Out at His Former Lawyer After Guilty Plea 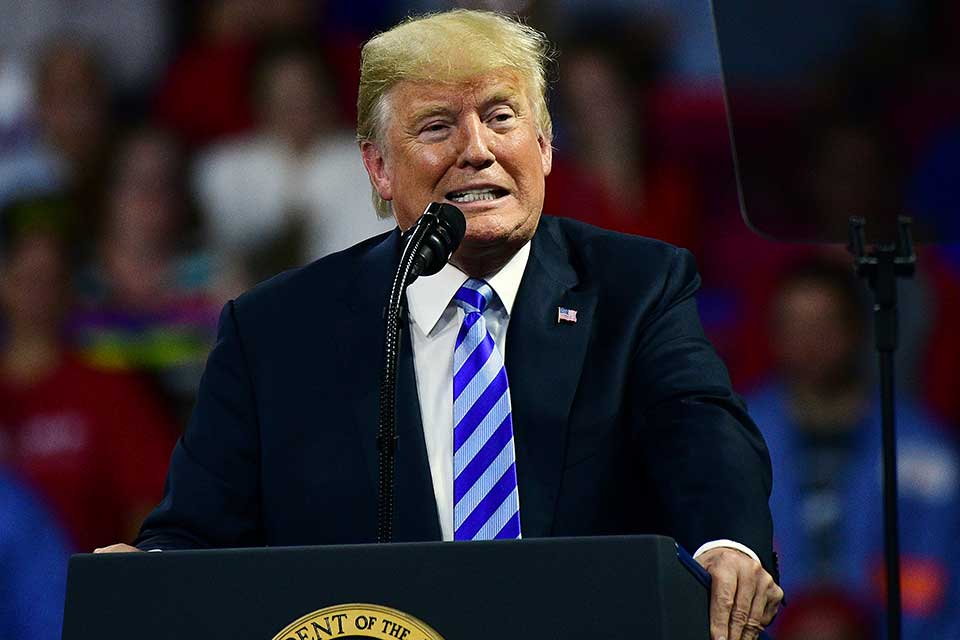 WASHINGTON (AP) — Facing a growing threat to his presidency, President Donald Trump lashed at his former personal lawyer Michael Cohen, a day after the onetime "fixer" implicated Trump in a campaign cover-up to buy the silence of women who said they had sexual relationships with him.

I feel very badly for Paul Manafort and his wonderful family. “Justice” took a 12 year old tax case, among other things, applied tremendous pressure on him and, unlike Michael Cohen, he refused to “break” - make up stories in order to get a “deal.” Such respect for a brave man!

Trump on Wednesday accused Cohen of making up "stories in order to get a 'deal'" from federal prosecutors. Cohen pleaded guilty to campaign finance violations that the lawyer said he carried out in coordination with Trump.

If anyone is looking for a good lawyer, I would strongly suggest that you don’t retain the services of Michael Cohen!

"If anyone is looking for a good lawyer, I would strongly suggest that you don't retain the services of Michael Cohen!" Trump tweeted Wednesday.

In a split screen for the history books, Cohen's admission to the crimes in federal court in New York on Tuesday came at nearly the same moment that Trump's onetime campaign chairman, Paul Manafort, was convicted by a jury in Virginia of financial misdeeds. Manafort faces separate charges in September in the District of Columbia that include acting as a foreign agent.

The back-to-back blows resulted from the work of special counsel Robert Mueller, who is investigating Russia's attempts to sway voters in the 2016 election, including hacking Democrats' emails, whether the Trump campaign may have cooperated, and if the president himself obstructed justice in investigating both.

Trump has denounced the probe again Wednesday on Twitter as a "witch hunt."

Cohen's lawyer, Lanny Davis, said Wednesday that Cohen has information "that would be of interest" to the special counsel. Davis said Cohen is not looking for a presidential pardon.

"My observation is that the topics relating to hacking and the crime of hacking ... that there are subjects that Michael Cohen could address that would be of interest to the special counsel," Davis said in a series of television interviews.

Trump soon weighed in on Twitter, taking his shot at Cohen and praising Manafort, saying he has "such respect for a brave man!"

Manafort, Trump wrote, had "tremendous pressure on him and, unlike Michael Cohen, he refused to 'break.'"

But there was no doubt that Cohen's acknowledgement of a coordinated payoff scheme puts Trump's presidency on the defensive.

"It's going to be hard for the president to try to discredit all this. It's circling him," said David Weinstein, a former federal prosecutor who is not involved in the case.

Cohen said once he'd take a bullet for Trump, and was intimately familiar with Trump's personal, business and political dealing for more than a decade. Cohen released a secretly recorded audio of Trump discussing a payout made via a third party to model Karen McDougal who says she had a sexual relationship with Trump in 2006.

Cohen initially denied making the payments to the women — McDougal and adult film actress Stormy Daniels — or that Trump had any knowledge of them. But he changed his story as prosecutors closed in. Davis, his attorney, told CNN Wednesday of Cohen, "There has been an evolution in his loyalty toward Donald Trump."

The payments to the women could be regarded as an illegal campaign expenditure if the money was clearly meant to influence the 2016 election.

Trump, on Twitter, maintained otherwise, saying, "Michael Cohen plead (sic) guilty to two counts of campaign finance violations that are not a crime."

He also complained that "President Obama had a big campaign finance violation and it was easily settled!" Trump was apparently referring to a fine levied on the former president's 2008 campaign over missing and delayed disclosure of high-dollar donors in the final days of that race.

In a deal with federal prosecutors, Cohen pleaded guilty to eight counts, including tax evasion. He could get about four to five years in prison at sentencing Dec. 12.

Manafort was convicted of eight felony counts, including charges of filing false tax returns and failing to report foreign bank accounts. Prosecutors will decide whether to retry him on 10 other charges.

Manafort was a well-connected Republican consultant and lobbyist who prosecutors say made $60 million in foreign money working for Russia-backed politicians in Ukraine. He was campaign chairman for months during the GOP nomination battle in 2016.

Trump said Tuesday the legal developments had nothing to do with Russian election interference and that he felt "badly for both" men. At the West Virginia rally, he focused on developments on trade, taxes, North Korea and his plans for a space force.

"Where is the collusion?" he asked.

His supporters chanted Trump's campaign staples "Drain the swamp!" and "Lock her up!"

The White House is trying to keep the focus on the November election, when control of Congress is at stake. Trump allies such as former strategist Steve Bannon seek to frame the election as a referendum on the potential impeachment of the president. Trump confidants have long argued that the president's fate in such a scenario would ultimately be more a matter of politics than law.

Also Tuesday, prosecutors and defense attorneys for former Trump national security adviser Michael Flynn agreed to postpone his sentencing after he pleaded guilty to lying to the FBI about his contacts with a Russian official, in a sign his cooperation was still needed in the Mueller probe.

Trump confidants are reasserting that it is the White House position that a sitting president cannot be indicted. They are citing a 2000 opinion of the Justice Department's Office of Legal Counsel, which provides legal advice and guidance to executive branch agencies.

Trump's lawyers have said Mueller plans to adhere to that guidance, though Mueller's office has never independently confirmed that. There would presumably be no bar against charging a president after he or she departs the White House.

For many around Trump, Cohen has represented a greater threat than even the Russia investigation, drawing from Cohen's decade of working as the then-celebrity real estate developer's fixer.

An FBI raid on Cohen's New York office and hotel room in April rattled the president, who has complained publicly about what he felt was government overreach while privately worrying about what material Cohen may have had after working for the Trump Organization for a decade.

Those in Trump's orbit, including his lawyer Rudy Giuliani, have steadily ratcheted up attacks on Cohen, suggesting he was untrustworthy and lying about what he knew about Trump's business dealings. When Cohen's team produced a recording that the former fixer had made of Trump discussing a payment to silence a woman about an alleged affair, Giuliani sought to impugn Cohen's credibility and question his loyalty.

Trump stewed for weeks over the media coverage of the Manafort trial. Though the proceedings were not connected to Russian election interference, Trump has seethed to confidants that he views the Manafort charges as "a warning shot" from Mueller.

"What matters is that a jury found that the facts presented to them by the special prosecutor warranted a conviction of someone who surrounds the president," Weinstein said.