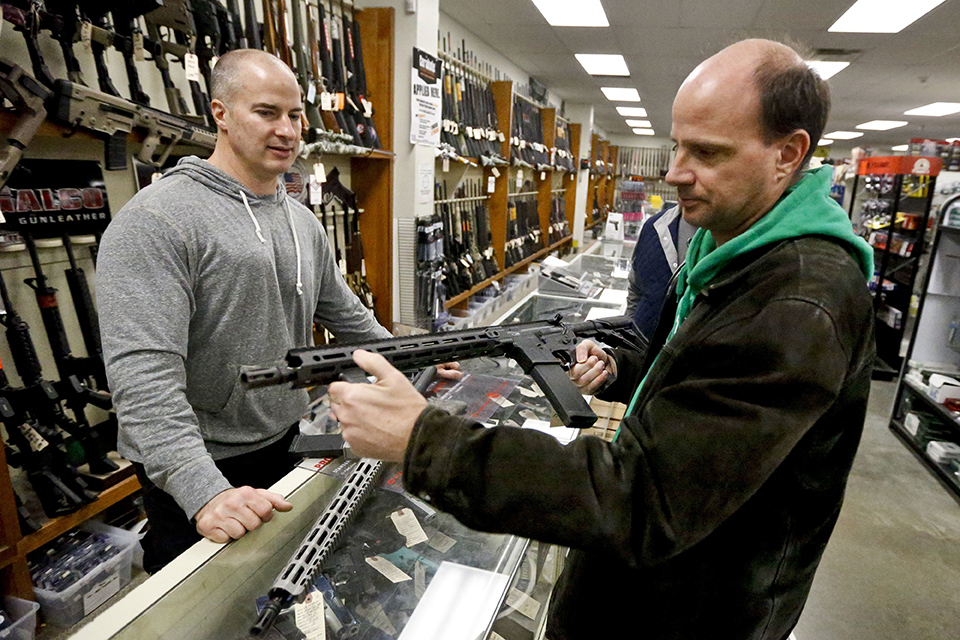 COLUMBUS, Ohio (AP) — Gun store owners called it the "Trump slump." Sales of firearms slowed dramatically after the election of Donald Trump as president in 2016 allayed fears of a Democratic crackdown on gun owners.

That trend has continued in recent weeks even with talk of gun control in Congress and among business leaders following the Feb. 14 massacre of 17 people at a Florida high school.

In the past, gun massacres generally led to an uptick in sales as people worried about the government restricting access. But with Parkland, things are different.

"The day after the election, it's just like somebody turned a faucet off," said David Dobransky, 67, who owns Dobransky Firearms, a small gun shop in North Canton, Ohio. Since then, sales there have been cut in half, and nothing the president or Congress has done or said following the Florida shooting has improved business.

Gun owners apparently have faith that Trump won't impose more restrictions, gun show owners say. That's even with the confusing messages Trump has sent in the past week.

He has cast himself as a strong supporter of the National Rifle Association but on Wednesday criticized lawmakers for being too fearful of the NRA to take action. He also reaffirmed positions opposed by the NRA, such as banning gun sales to those under 21.

In an earnings conference call last week, American Outdoor Brands, which owns Smith & Wesson, said revenue fell by one-third over the past three months, consistent with a drop since Trump was elected.

Demand dropped in December and January, before the Florida shooting and the debates on gun laws that followed, he said. The company doesn't expect sales to improve much over the next year.

Over the past 30 years, U.S. gun production has tripled. Nine million were produced in 2015, compared with 3 million in 1986, according to the Bureau of Alcohol, Tobacco, Firearms and Explosives. Those figures don't reflect sales since Trump took office, bringing with him the perception he was friendlier to gun owners.

At Duke's Sport Shop in New Castle, Pennsylvania, gun sales have gone up in recent days, but that's thanks to the annual infusion of tax refund checks, shop owner Wes Morosky said Thursday.

The family-owned business started by Morosky's father, Duke, has about 2,000 firearms in stock at any one time, including AR-15s, the assault-style rifle used in the Florida shooting and the main subject of new debate about an assault rifle ban.

After the 2012 Sandy Hook school massacre, the store had a hard time keeping stock on shelves as fears arose that Obama would ban assault rifles through an executive order, Morosky said.

On Friday morning, a few customers browsed shelves at L.E.P.D. Firearms & Range, a small gun shop on the northwest side of Columbus. In the back, a handful of people practiced target shooting at the shop's indoor range. A UPS driver dropped off a delivery while co-owner Eric Delbert awaited another package from FedEx. The store sells a full array of new and used firearms, including the AR-15.

After Trump's election, the drop in sales was almost "instantaneous," said Delbert, a part-time police officer, following nearly eight years of panic buying with a Democrat in the White House.

Recently, "We really haven't seen any uptick in sales, other than the normal trends for the time of year," Delbert said.