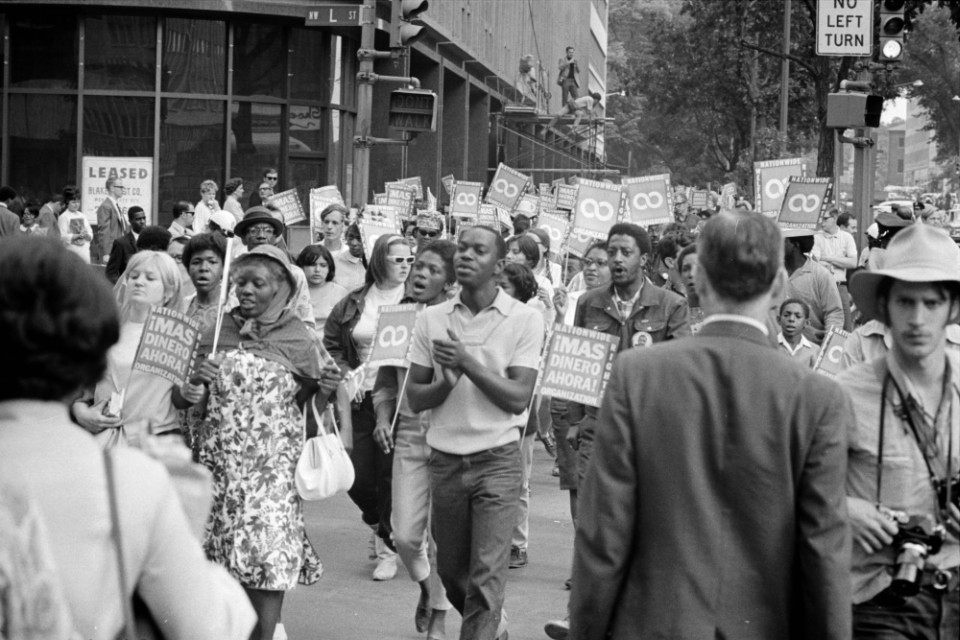 It also features wooden tent panels, lapel buttons, placards and murals created by and used by some of the nearly 8,000 people who occupied the National Mall in Washington, D.C., for nearly six weeks to call the nation’s attention to the crippling effects of poverty for minorities, children and the elderly.

The museum’s exhibition is housed in its gallery at the Smithsonian’s National Museum of American History as a partner to the exhibition, “American Democracy: A Great Leap of Faith,” which explores the history of citizen participation, debate and compromise from the nation’s formation to today.

Launching its celebration of King’s birthday, the museum, hosted a media briefing and guided tours of the new exhibition bringing in people who played key roles in building and documenting Resurrection City.

“With new and recently discovered film and audio footage, images and objects, this exhibition provides a rare look inside the 1968 Poor People’s Campaign and commemorates the legacy of Dr. King’s final campaign for economic justice,” said Lonnie G. Bunch III, founding director of the National Museum of African American History and Culture. “This exhibition reminds us that despite the unprecedented economic growth in America over the past five decades, there are still many Americans living below the poverty line. Although the Poor People’s Campaign did not achieve its goal of eradicating poverty, it spawned a multiethnic and multiracial movement for economic fairness whose belief in helping America live up to its ideals still inspires to this day. The stories of those who sacrificed so much are found in ‘City of Hope: Resurrection City and the Poor People’s Campaign.’”

Original sound recordings of musical performances and conversations among campaign participants have been provided by the Smithsonian’s Center for Folklife and Cultural Heritage. The recordings, along with never-seen film produced by the Hearst Corp., show how people lived during the six-week occupation at Resurrection City. Among the film highlights is footage of people traveling in a caravan of mule-drawn wagons from Marks, Miss., to Memphis, Tenn., for King’s memorial service and then on to Washington to participate in the Poor People’s Campaign.

In the 1960s, as the United States emerged as a global model of wealth and democracy, an estimated 25 million Americans lived in poverty. From the elderly and underemployed to children and persons with disabilities, poverty affected people of every race, age, and religion. In response, the Southern Christian Leadership Conference, led by King and Ralph David Abernathy, organized the Poor People’s Campaign as a national human rights issue.

As a multiethnic movement that included African Americans, Mexican Americans, Native Americans, Puerto Ricans, Asians and poor whites from Appalachia and rural communities, the six-week, live-in demonstration in Washington attracted protestors nationwide. The campaign leaders presented demands to Congress, including jobs, living wages and access to land, capital and health care. It was the first large-scale, nationally organized demonstration after King’s death. The campaign, the final vision of King’s life, has come to be known as his most ambitious dream.

About the National Museum of African American History and Culture

The National Museum of African American History and Culture opened Sept. 24, 2016, on the National Mall in Washington, D.C. Occupying a prominent location next to the Washington Monument, the nearly 400,000-square-foot museum is the nation’s largest and most comprehensive cultural destination devoted exclusively to exploring, documenting and showcasing the African American story and its impact on American and world history.