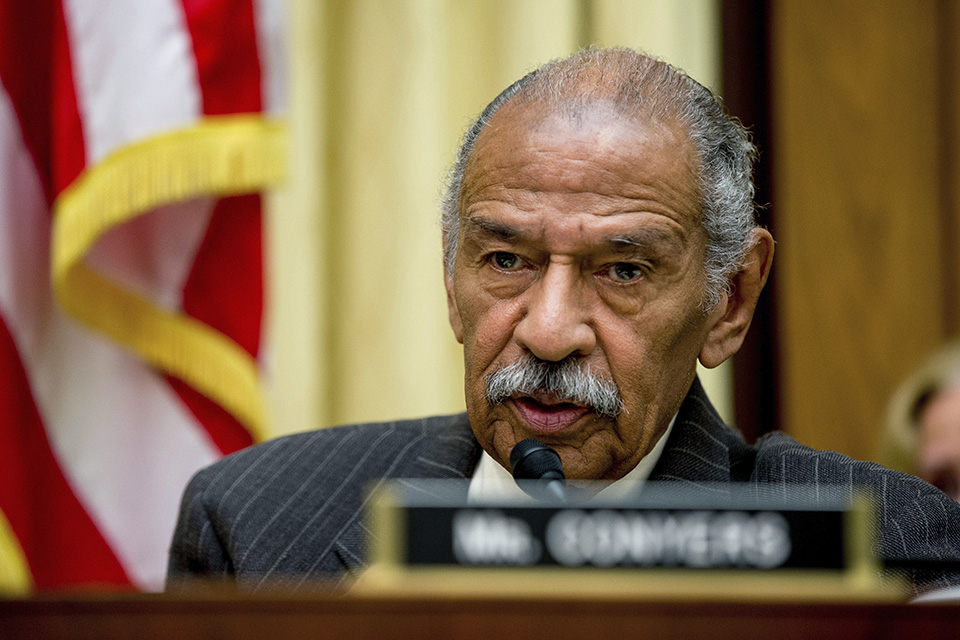 DETROIT — Besieged by allegations of sexual harassment, Democratic Rep. John Conyers resigned from Congress on Tuesday, bringing an abrupt end to the Detroit liberal's nearly 52-year career in the House.

The 88-year-old civil rights leader becomes the highest-ranking figure on Capitol Hill to be brought down by the sexual misconduct allegations that have toppled powerful men in Hollywood, the media and politics in recent weeks.

Conyers made the announcement on a Detroit radio talk show and endorsed his son, John Conyers III, to succeed him.
"I'm in the process of putting my retirement plans together," the congressman said from the hospital where he was taken last week after complained he felt light-headed. "I am retiring today."

"My legacy can't be compromised or diminished in any way by what we're going through now," said Conyers, who has denied any wrongdoing. "This, too, shall pass. My legacy will continue through my children."

Conyers, who was first elected in 1964 and went on to become a founding member in 1971 of the Congressional Black Caucus, easily won re-election last year in the heavily Democratic district. Until Tuesday, he was the longest-serving current member of Congress.

But amid a drumbeat of allegations he groped or sexual harassed women who worked for him, he faced growing calls to resign from colleagues in the House, including House Democratic Leader Nancy Pelosi.

As the furor grew in recent weeks, he stepped down as the ranking Democrat on the House Judiciary Committee.

Rep. Jerrold Nadler, who replaced Conyers as ranking member on the committee, said he was saddened by the resignation of his "friend and mentor" but added: "There can be no tolerance for behavior that subjects women to the kind of conduct that has been alleged."

The House Ethics Committee had been reviewing the harassment allegations.

Michigan state Sen. Ian Conyers, a grandson of Conyers' brother, told The New York Times he plans to run for the seat.

On Monday, a woman who said she worked for the congressman for more than a decade said he slid his hand up her skirt and rubbed her thighs while she was sitting next to him in the front row of a church.

Elisa Grubbs made the allegation in an affidavit released by her attorney. Grubbs is the cousin of another accuser, Marion Brown, who reached a settlement with Conyers over sexual harassment allegations but broke the confidentiality agreement to speak publicly last week.

Grubbs said in her affidavit that she worked for Conyers in various roles from around 2001 to 2013.

"Rep. Conyers slid his hand up my skirt and rubbed my thighs while I was sitting next to him in the front row of a church," Grubbs said. "I was startled and sprang to my feet and exclaimed, 'He just ran his hand up my thigh!' Other staffers witnessed the event."

She also said she saw repeatedly Conyers touching and stroking the legs and buttocks of Brown and other female staffers. Such behavior "was a regular part of life while working in the office of Rep. Conyers," she said.

She said that one time, when she was at Conyers' home, he came out of the bathroom naked when he knew she was in the room.

"This is about much more than one congressman," Grubbs' attorney, Lisa Bloom, said in an email after Conyers announced his resignation. "Systemic change is urgently needed so no other women have to endure the retaliation, secrecy and delays my client Marion Brown and others experienced."

Conyers' attorney, Arnold Reed, told the Detroit Free Press that the allegations by Grubbs are "another instance of tomfoolery from the mouth of Harvey Weinstein's attorney." Bloom previously represented Hollywood power broker Weinstein, who is accused of sexual misconduct by several women.

Deanna Maher, who ran a Michigan office for Conyers from 1997 to 2005, has also accused him of sexual misconduct. And a former scheduler complained of sexual harassment and retaliation.