Should FBI Use Foreign Surveillance Data Without a Warrant? 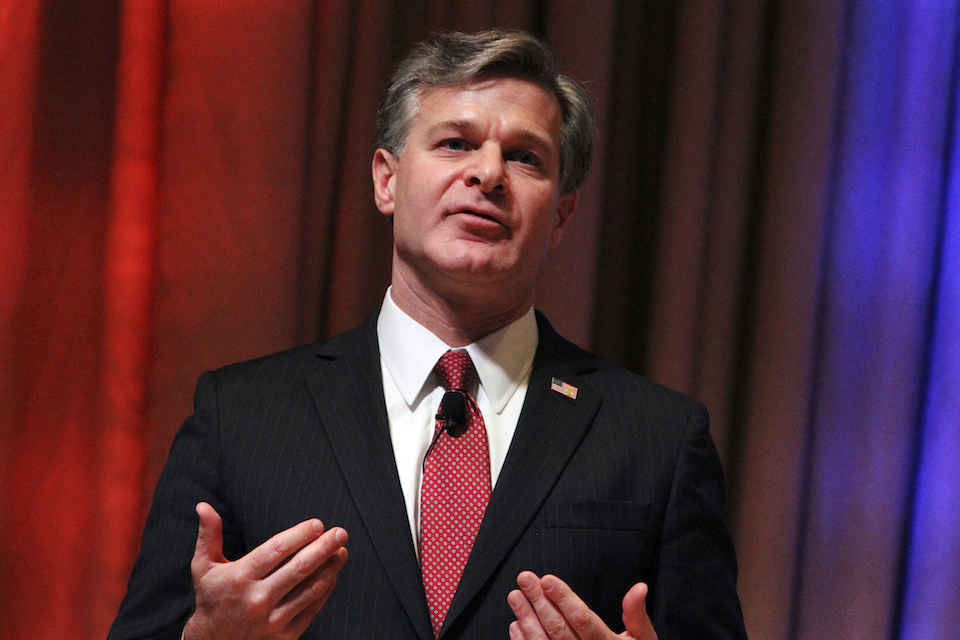 WASHINGTON (AP) — It's 3 a.m. when a security guard notices a man taking photographs of the Key Bridge a few miles from the White House. There's been no crime, but the guard is suspicious and passes the man's license plate number to the FBI.

In a case like this, the FBI might query databases containing foreign intelligence collected overseas. An agent might learn nothing or might find out the plate belongs to an American communicating online with a suspected Islamic State militant.

It's these scraps of data, sometimes meaningless on their own, that can help foil plots and save lives, the government contends.

But as Congress considers how to reauthorize the law governing the government's use of such information, lawmakers from both parties and many people in the United States want stricter controls to better protect privacy.

FBI Director Christopher Wray crafted the bridge story to show why his agents shouldn't have to get a warrant before querying foreign intelligence information legally gathered overseas.

The FBI's use of foreign intelligence is at the heart of the debate over the future of the 2008 Foreign Intelligence Surveillance Amendments Act, including the controversial Section 702. The law is set to expire Dec. 31.

"Let's say you find out that this person photographing the Key Bridge has been communicating with a known Islamic State recruiter, which is the kind of information that's in the 702 database," Wray said at a recent forum on the subject.

The FBI agent, Wray said, is "not going to be able to get a warrant just based on that to search the database."

"The idea of blinding the agent — putting some restriction on his ability to see information that we already constitutionally have sitting in our own data bases — the irony of that is tragic to me," Wray said.

But the government already has many tools it can use to collect information about someone without a warrant, said Democratic Sen. Ron Wyden of Oregon, a staunch advocate of privacy rights. He said it can obtain phone records — who someone called and when — without a warrant.

"That will show if this bridge suspect is talking to terrorists," Wyden said.

"Going straight to reading the content of private communications without a warrant is an end-run around the Fourth Amendment," which protects Americans from unreasonable searches and seizures.

"Think about it," he said. "Would you want the government reading your emails or listening to your phone calls, just because someone called the FBI and said you looked suspicious?"

There is bipartisan agreement that the law is invaluable in helping the U.S. track foreign spies, terrorists, weapons trafficking and cyber criminals.

But some members of Congress and privacy advocates want greater protections for the communications of Americans that also are picked up.

They think the FBI should be required to obtain a warrant if it wants to search foreign intelligence in investigating tips such as the fictitious American at the bridge.

Wray said tips are flooding into the FBI by the thousands. It's at this initial stage — where leads are sifted and prioritized — when foreign intelligence helps connect dots and spot possible national security threats, he said.

Director of National Intelligence Dan Coats calls this trove of foreign intelligence the "holy grail" that provides insight into the thinking and actions of U.S. adversaries.

Intelligence and law enforcement officials say Section 702 is not about bulk collection of information — not even foreigners — and is never used to target Americans.

Still, former acting CIA Director Mike Morell said one part of the law that needs to be changed is the FBI's ability to search the data for information on Americans without first obtaining a warrant. He makes exceptions for emergencies or an imminent terrorist threat.

The law shouldn't "offer an easy route for federal law enforcement agents, specifically the FBI, to obtain evidence about Americans to which they would not be otherwise entitled," Morell said.

Privacy advocates agree, but are unsure how Congress will act, given the variety of legislative proposals.

"There's everything between no fix whatsoever and a complete prohibition on a query without a warrant," said Elizabeth Goitein at New York University School of Law.

"I think there has to be a warrant requirement in order to search for Americans' communications in the Section 702 data."