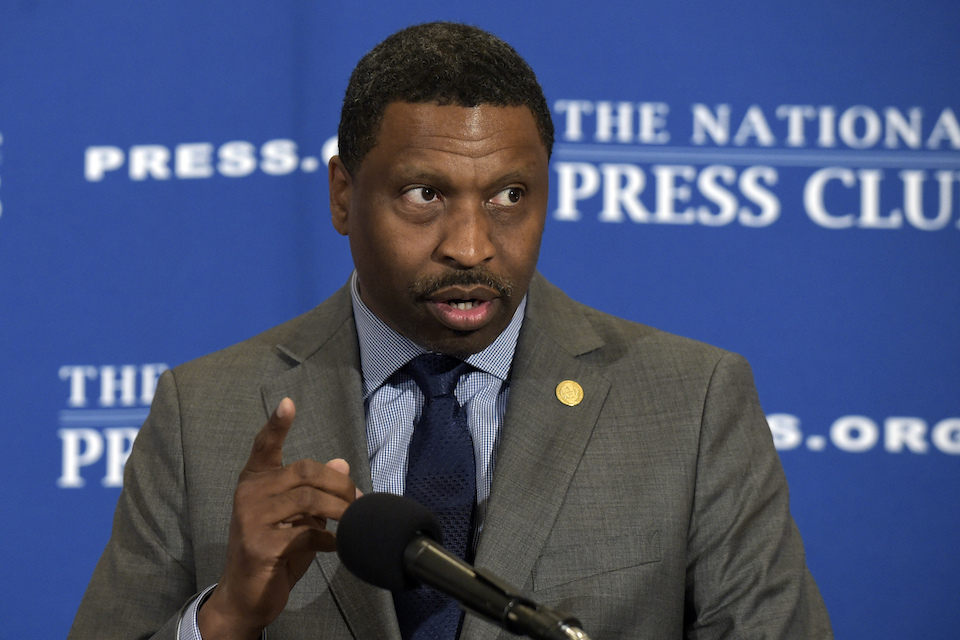 WASHINGTON (AP) — The NAACP turned to an insider Saturday to help bring the nation's oldest civil rights organization back to prominence.

Derrick Johnson, 49, of Jackson, Mississippi, was hired as the NAACP's 19th president and CEO after having served as interim leader since July and previously as vice chairman of the NAACP board of directors.

Johnson, in an interview with The Associated Press, said the NAACP will be much more politically active in the coming years and will alter its nonprofit status so it can more effectively lobby for its members' positions.

Johnson's hiring was finalized Saturday at a meeting of the board of directors in Arlington, Virginia.

"In his time serving as our interim president and CEO, Derrick has proven himself as the strong, decisive leader we need to guide us through both our internal transition as well as a crucial moment in our nation's history," said Leon Russell, the NAACP board chairman.

"With new threats to communities of color emerging daily and attacks on our democracy, the NAACP must be more steadfast and more immovable than ever before, and Derrick has the vision, mobility, and courage to help us meet that demand."

The NAACP parted ways with its previous president and CEO, Cornell William Brooks, in May.

Johnson has been the face of the NAACP since then as the organization has refocused its work on supporting its local chapters and tried to retool in the face of rising organizations like Black Lives Matter.

Currently as a 501(c)(3) nonprofit organization, the NAACP can only engage in insubstantial lobbying efforts. So it will reorganize as a 501(c)(4) nonprofit, similar to its local affiliates, which will allow it to conduct unlimited lobbying and promotion of political candidates and issues.

The change will happen "so we can have the collective voice and impact that a civil rights organization in 2017 and forward should have," said Johnson, former president of the Mississippi State Conference of the NAACP.

Shedding its 501(c)(3) status will allow the  NAACP "to be able to clearly state without any equivocation our positions and to encourage our members and the communities we represent to do the same," he said.

The NAACP has been conducting a listening tour around the country, trying to figure out how best to support civil rights workers in communities who are working on issues like police brutality, the upcoming census, redistricting and voter suppression.

The listening tour stops in Los Angeles on Thursday and Nashville, Tennessee, in November.

Local chapters "want to be able to have a stronger voice," Johnson said, and the national NAACP wants to be "able to better support our members on the ground."

The NAACP recently sued the Trump administration to stop it from eliminating the Deferred Action for Childhood Arrivals program, which allowed immigrants brought into the country illegally as children to be temporarily shielded from deportation.

The job of the NAACP is "to really engage in a political landscape to lift up the needs and interest of the community we represent," Johnson said.

"When our members speak in a collective voice our national office should also speak in tandem with the collective public policy voice."