Protests Increase over Universities and Ties to Slavery 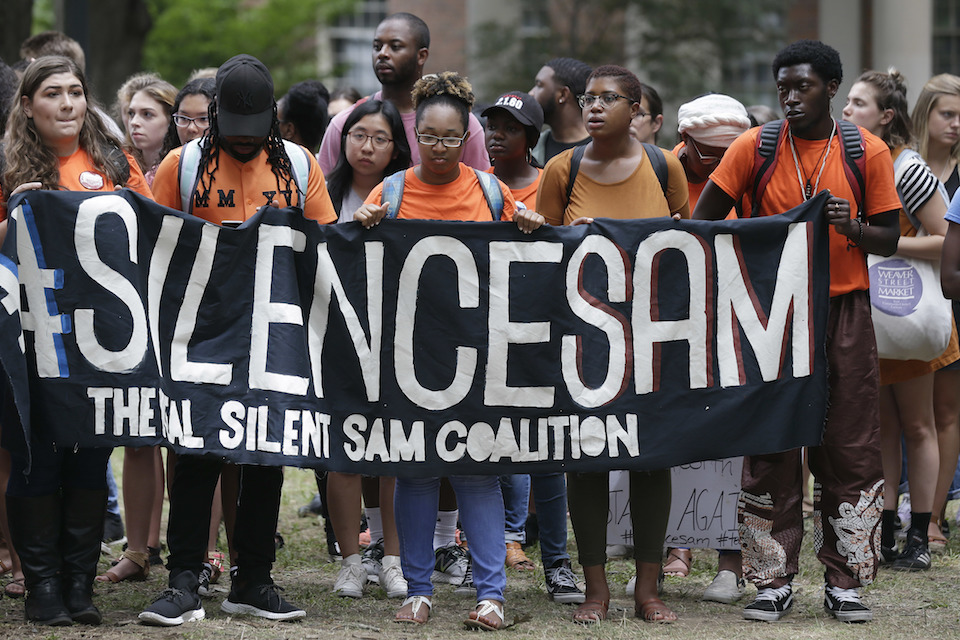 HILL, N.C. (AP) — The national debate over removing Confederate symbols from U.S. college campuses is spurring wider questions about university benefactors whose ties to slavery or white supremacy flew under the radar in decades past.

Students and alumni are no longer simply opposing overt Confederate memorials, but also lesser-known founders and donors with troubling racial legacies. And the discussions have intensified after deadly white nationalist protests in August in Charlottesville, Virginia.

The problem is apparent at the University of North Carolina, where opposition to a Confederate statue has dredged up racist statements by a former trustee. Tobacco magnate Julian S. Carr, himself a Confederate veteran, gave the dedication speech in 1913 for the campus statue depicting an anonymous rebel soldier. His remarks included a reference to the "pleasing duty" of whipping a black woman in public.

"He stood out here and stood in front of a crowd of people and bragged about how he drug a 'negro wench' through the streets for insulting a white woman," said Gabrielle Johnson, a student who helped organize a sit-in against the statue nicknamed "Silent Sam." ''I don't see how that embodies anything other than hatred." 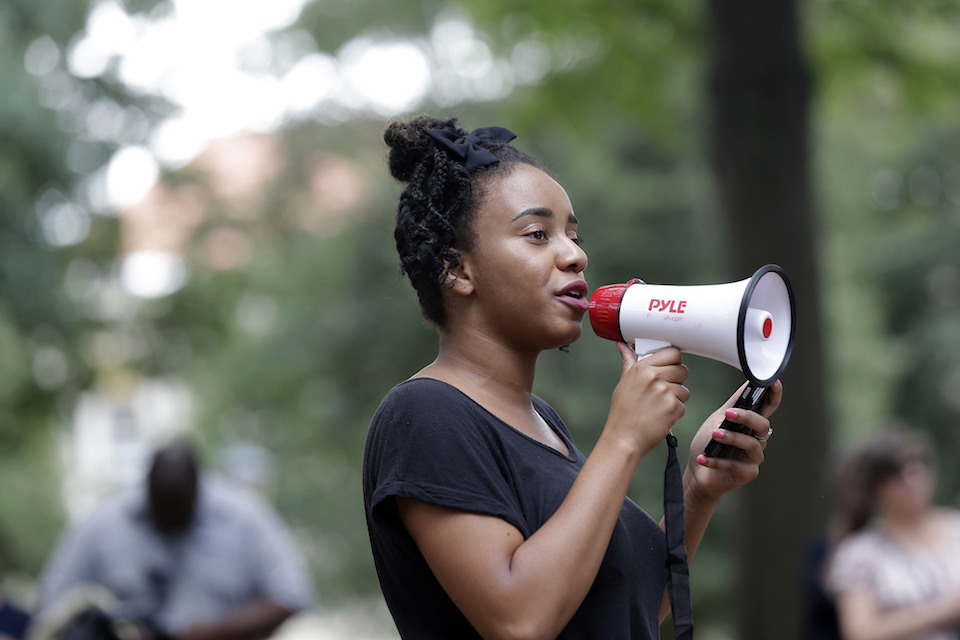 University of North Carolina student Gabrielle Johnson speaks to a crowd gathered at a Confederate monument protest on campus in Chapel Hill, N.C. Thursday, Aug. 31, 2017. The debate over removing Confederate symbols from college campuses has prompted fresh questions about buildings named for benefactors whose ties to slavery or white supremacy may have flown under the radar in decades past. (AP Photo/Gerry Broome)

chancellor has said a state historic monument law prevents the university from removing "Silent Sam." But the fresh attention to Carr has spurred wider conversations about his legacy at UNC and nearby Duke University, where part of campus was built on land donated by Carr. Both schools are home to a "Carr Building" and have convened panels on how to handle controversial building names.

It's not the first such dilemma for either school. In 2014, Duke removed the name of a former governor — Charles Aycock — from a dorm, citing his legacy of black disenfranchisement. And UNC chose "Carolina Hall" to replace the name of a former Ku Klux Klan leader before putting a freeze on renaming other historic buildings for 16 years.

The issue resonates beyond the South. Yale University announced this year it would rename a residential college honoring former Vice President John C. Calhoun, an ardent supporter of slavery. Georgetown and Harvard have acknowledged or apologized for slavery ties.

And in mid-September, protesters at the University of Virginia draped a black shroud over a statue of university founder Thomas Jefferson, a slave owner they accused of racism.

University president Teresa Sullivan condemned the protesters' action while acknowledging Jefferson's faults: "In apparent contradiction to his persuasive arguments for liberty and human rights, however, he was also a slave owner."

About 30 mostly Southern universities will gather this October for a symposium on higher education's ties to slavery. One of them, Washington and Lee University, is keeping Confederate Gen. Robert E. Lee in its name while pledging further study of the school's history.

University president Will Dudley urged "a critical analysis that goes beyond the caricatures of one-dimensional heroes and villains."

In Nashville, Tennessee, Vanderbilt University took final steps in 2016 to rename Confederate Memorial Hall, but a black graduate subsequently wrote a newspaper column saying other names should come down.

Lee Hall-Perkins decried one dorm named for school founder Holland McTyeire, a Methodist bishop who once wrote an essay on the duties of Christian slave owners, including physical punishment in "moderation."

Responding to a reporter, Vanderbilt said it's holding a spring conference on slavery's impacts.

Adam Domby, assistant professor of history at College of Charleston in South Carolina, said many Southern political figures from a century ago espoused racism.

"A lot of the leading political figures of the early 20th century are going to be tainted with white supremacy," Domby said, adding that Carr unsuccessfully ran for U.S. Senate in 1900 on a white supremacist platform.

Scholars note that Carr — not unlike Lee or Jefferson — has a complicated legacy. He also donated to African-American institutions and served as treasurer for the group that started what became historically black North Carolina Central University, said university archivist Andre Vann.

"If I had to rationalize some of this, the lives and experiences of men and women like Carr and others are really a mirror of the society that they lived in," Vann said.

The 2008 book "Upbuilding Black Durham" noted black leaders struck an uneasy accommodation with Carr, one of Durham's wealthiest men, though well aware of his racial views.

"Once questioned about the elites' amiable relationship with the ex-Confederate, one black leader responded 'We prefer to think of General Carr in terms of his benefactions, not his politics,'"

Williams College history professor Louise Brown wrote in the book. "Thus the Durham black elite opted to cite the 'friendly feeling' between the races, well aware that the assertion was mostly not true."

Protesters at UNC now hope Carr's own words will persuade administrators of the need for change.

Recently Johnson stood before several hundred demonstrators at "Silent Sam" and read parts of Carr's 1913 speech through a bullhorn, emphasizing the words: "I horse-whipped a negro wench until her skirts hung in shreds."

Turning toward the statue, she exclaimed: "Silent Sam does not represent history ... He represents racism!"