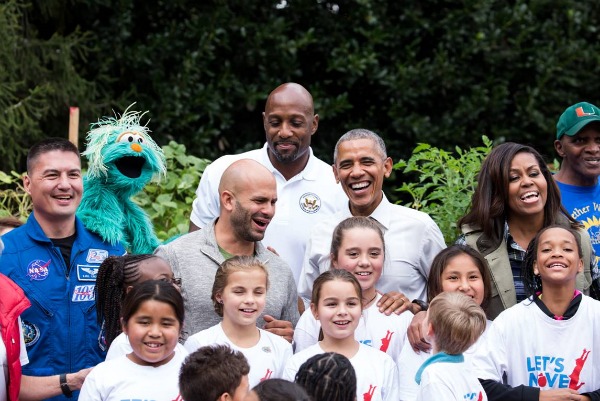 WASHINGTON -- First lady Michelle Obama, surrounded by 20 kids from across the nation she had invited to help her with her final harvest, made one thing crystal clear – she wants the elaborate “Kitchen Garden” she established to promote better eating to remain long after she and President Barack Obama have left the White House.

To that end, Obama announced last week a $2.5 million donation by the Burpee Foundation to preserve and care for the garden for at least 17 more years.

The children dug and picked vegetables to help her with her harvest and to literally enjoy the fruits of their labor as they later ate some of the food they picked.

“I take pride in knowing that this garden will serve as a reminder of what we all started, but also what we all have left to do,” Obama said at the dedication ceremony, “and as we dedicate this garden here today, I am hopeful that the future first families will cherish the garden like we have, and that it will become one of our enduring White House traditions.”

Updates to the garden include bluestone walkways, a wooden arbor, tables and benches and an inscribed stone that reads, “White House Kitchen Garden, established in 2009 by First Lady Michelle Obama with the hope of growing a healthier nation for our children.”

The tables, benches and arbor were designed by students at the University of Virginia’s School of Architecture with salvaged wood from the estates of for presidents Thomas Jefferson, James Madison and James Monroe and Civil Rights leader the Rev. Martin Luther King, Jr. Originally spanning 1,100 square feet, the garden has expanding to more than twice that size.

The changes and donation are a part of Obama’s efforts to ensure future first families get an opportunity to enjoy the garden.

The garden was the beginning of Obama’s “Let’s Move!” initiative, a campaign to get children across the nation healthier by being active and making healthier food choices.

On Thursday, Oct. 6, Sesame Street’s Rosita and Elmo hang out with kids invited to the final fall harvest of  the White House Kitchen Garden on the South Lawn of the White House. Photo by Cheriss May, Howard University News Service.

On Thursday, Oct. 6, children were invited to the final fall harvest of  the White House Kitchen Garden on the South Lawn of the White House. Photo by Cheriss May, Howard University News Service.

On Thursday, Oct. 6, Alonzo Mourning, Member of the Naismith Memorial Basketball Hall of Fame, seven-time NBA All-Star and Member of the President's Council on Fitness, Sports & Nutrition, holds up the Grilled Flatbread with Basil Puree and Garden Vegetables, prepared from the final Fall Garden Harvest of the First Lady's Kitchen Garden on the South Lawn of the White House.Photo by Cheriss May, Howard University News Service.

On Thursday, Oct. 6, First Lady Michelle Obama hugs school kids and Ashanti, Grammy Award Winning, Multi-Platinum Singer/Songwriter and Actress, next to the Kitchen Garden on the South Lawn of the White House. Photo by Cheriss May, Howard University News Service.

Michelle Obama said she wanted two students from Flint, Mich., to attend the final harvest to reinforce the concept that good nutrition can reduce the effects of exposure to lead contaminated water.   So, fourth grader A’layia Howard and fifth grader Xavier Purches from Freeman Elementary School were among the students.

Freeman Elementary School is a part of the “Let’s Move! Salad Bars to Schools” program, an initiative that donates salad bars to schools so children across the nation have daily access to fresh fruits and vegetables.

A’layia and Xavier said they were sleepy from their 5 a.m. flight, but the kids perked up after eating pizza made with vegetables they harvested.  Excited and appreciative, A’layia showed off a cartwheel and full split for the first lady.

Freeman fifth grade teacher Kathy Savoie said the countdown to the visit was exhilarating for the students.

“We would meet at lunch and we would talk about what we were going to do, what was going to happen and maybe some questions they might get asked, just to make them feel more comfortable,” Savoie said.

“And every day they would go down the hall and say, ‘Three more days, two more days.’”

The trip to the White House was the first time the students have been out of state or on an airplane she said.

Obama gave the children hugs and a motherly send off when the garden pizza was finished and the harvest finally over.

“Be good and make me proud.