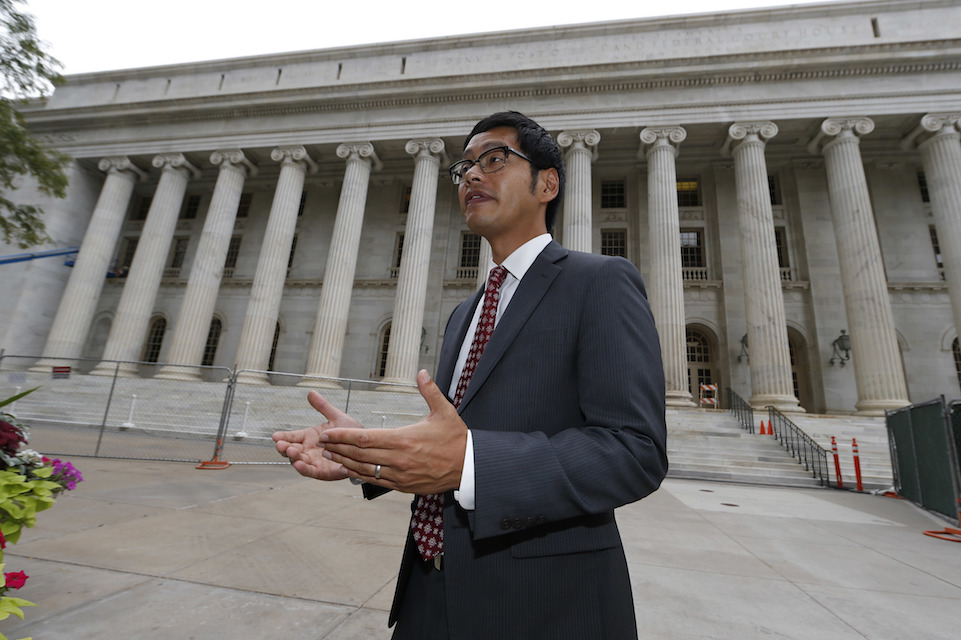 WASHINGTON (AP) — A federal appeals court on Friday blocked Kansas, Georgia and Alabama from requiring residents to prove they are U.S. citizens when registering to vote using a national form.

The 2-1 ruling is a victory for voting rights groups who said a U.S. election official illegally changed proof-of-citizenship requirements on the federal registration form at the behest of the three states.

People registering to vote in other states are only required to swear that that they are citizens, not show documentary proof.

The three-judge panel of the U.S. Court of Appeals for the District of Columbia acted swiftly in the case, issuing a two-page, unsigned ruling just a day after hearing oral arguments. A federal judge in July had refused to block the requirement while the case is considered on the merits.

The League of Women Voters and civil rights groups argued that the requirements could lead to the "mass disenfranchisement" of thousands of potential voters — many of them poor, African-American and living in rural areas

The groups took issue with the actions of Brian Newby, executive director of the U.S. Election Assistance Commission, who changed the federal form shortly after he took the job last November. Newby is a former Kansas election official who had publicly supported the state's effort to make the change.

The case now returns to the district court for a full hearing on the merits. But the appeals court said the voting rights groups are likely to succeed on the merits.

The change requires people seeking to register to show birth certificates, naturalization papers or other documents as proof of citizenship. Kansas has been actively enforcing the requirement, but Alabama and Georgia have not.

Opponents said Newby had no authority to take the action on his own. Even the Justice Department has refused to defend Newby's action and has sided with voting rights groups.

The appeals court's ruling requires the commission to immediately remove the proof-of-citizenship requirement from all forms. It requires the states to treat all registration applications filed since January 29 as if they did not have the requirement.

Judges Judith Rogers and Stephen Williams were in the majority and Judge A. Raymond Randolph dissented. Rogers was a Democratic appointee, while Williams and Randolph were appointed by Republican presidents.

The EAC was created in 2002 to help avoid a repeat of the disputed 2000 presidential election between George W. Bush and Al Gore following ballot confusion in Florida.

It is supposed to have four commissioners, two Democrats and two Republicans, but one of the Democratic seats is currently vacant. The remaining commissioners never acted to approve or disapprove Newby's action.

Kansas Secretary of State Kris Kobach had argued that the change was needed to prevent voter fraud. He rejected claims that the requirement undermined voter registration, saying Kansas voter rolls have risen overall this year.