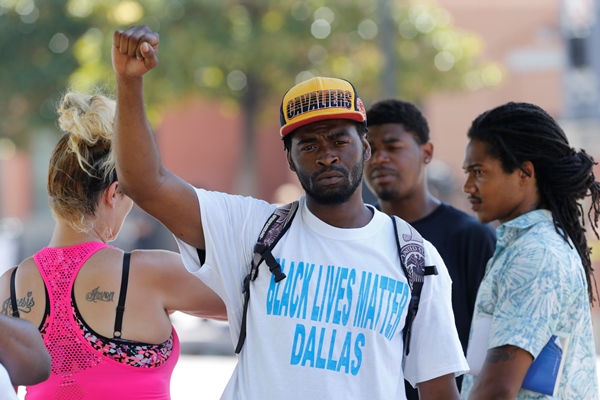 DALLAS (AP) — When the first shots rang out, Marcus Carter was standing on a downtown Dallas street corner. Beau Nazary was tending to customers in his family's Mediterranean restaurant. And Gillian Breidenbach was in her high-rise condo, her teenage son with friends somewhere below the gleaming city landscape shining through her windows.

The chaos and panic that ensued when Micah Johnson sprayed bullets at a protest against police brutality, killing five officers, resonated across a city increasingly defined by its diversity. Now Dallas has become a focal point in the nation's ongoing debate and struggles around race and criminal justice.

"Downtown Dallas is a hub," Breidenbach said. "And now it's a crime scene."

In the last decade, the population of Hispanics, blacks and whites in Dallas has increased by the hundreds of thousands. Blacks who migrated North in the first half of the 20th century have returned in droves to Southern cities like Dallas, in pursuit of better jobs and black middle-class networks. Hispanics, including many emigrating from Mexico, have settled in Texas cities where they have long historic and cultural roots. Nearly a quarter of all Dallas residents today were born in another country.

It's a starkly different place than it was 53 years ago, when another shooting — the assassination of President John F. Kennedy — turned an international spotlight on the city. Then, Dallas was about 80 percent white and 20 percent black. Today, it's about half white, 43 percent Hispanic and 25 percent black.

"It's a place that's been gaining people of all racial groups," said William Frey, a demographer with the Brookings Institution. "It's kind of the face, one of the faces, of the new America."

When the bullets flew, all those groups collided in a moment of fear.

Carter, 33, was waiting for his girlfriend and watching the protest Thursday evening when he heard what sounded like a firecracker. A week before, he'd quit his job as a cook. He'd gone downtown not to march but to see if he could find a new job. The bang of a gun erupted again and a mass of people ran in his direction.

He searched for his girlfriend through the maze of scrambling people and, once spotting her, yelled for her and others around him to duck. One of what sounded like more than 100 bullets being fired struck a nearby building, and a piece of concrete flew in Carter's direction, striking him in the arm.

"The bullets are close," he remembers thinking. "Very close."

A few blocks away, Nazary heard the sound of gunfire from inside his restaurant. Born in Iran, Nazary was with his family on vacation in the U.S. when the Iranian revolution erupted in 1979. Unable to return, they settled in Dallas. They started a successful restaurant that grew to four locations.

Dallas was a city that welcomed them.

"That's why I've never been back to Iran since '79," Nazary said. "I consider myself American."

Police cars and ambulances swarmed by outside the restaurant. Nazary locked the doors and told all his patrons to move to the back. They nervously looked at their cellphones and called relatives.

Breidenbach wasn't immediately worried when she heard on the news that gunshots had been fired in Dallas. Gunshots were fired frequently enough in big cities like hers. Breidenbach, a banking executive, had moved downtown from the suburbs a year and a half ago to move closer to her children's schools.

Unlike in the suburbs, where she had worried about her children crossing wide, busy streets when they were younger, she felt a certain safety in the density of the city.

But when it became clear the shots were part of an attack, Breidenbach panicked. Earlier that evening, her 17-year-old son had sent her a text to let her know he was out eating with friends.

Suddenly she realized she did not know exactly where he was.

"My heart started to race," she said.

She used an app on her phone to locate her son. It showed he was in their building. Earlier, he'd mentioned planning to go to their building's rooftop pool after dinner.

Breidenbach rushed toward the elevator and after what felt like an eternity, found him there. She burst into tears.

When the bullets ceased and people began to emerge from where they took shelter, they found a city that had turned into a police zone. A quadrant encompassing 22 blocks was closed with yellow police tape.

The next day, Carter returned to the site wearing a Black Lives Matter T-shirt. He watched police lay markers where bullets had fallen just feet away from where he stood. He said that while black people are "tired of being pinpointed for just any and every reason," he was frustrated by what had happened.

"There's a better way to get your point across," Carter said. "There were people who had nothing to do with that out there. People who actually supported your cause."

Nazary placed strips of blue tape in solidarity with the officers the next morning on all of his restaurant's windows, along with signs that read, "Pray for Dallas blue."

Breidenbach attended a prayer vigil outside her building and held her children close. She said the shooting would not change how she feels about downtown.

"I don't want this incident to define that," she said. "This isn't Dallas."