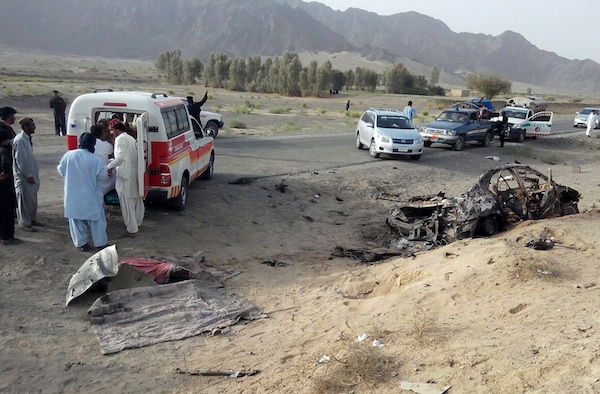 KABUL, Afghanistan (AP) — The Latest on the killing of Taliban leader Mullah Mohammed Akhtar Mansour in a drone strike (all times local):9:30 p.m.

The Sunday statement reiterated Pakistan's protest against drone strikes conducted on its territory, which it describes as "a violation of its sovereignty."

It did not however confirm that the Taliban leader was killed in the drone attack.

Earlier a senior Taliban commander told the AP that Mansour had been killed in the Noshki district, near the Afghanistan-Pakistan border.

The top commander of U.S. forces in the Middle East says the killing of the Taliban's supreme leader presents a difficult dilemma for the militants in Afghanistan.

Gen. Joseph Votel told reporters while visiting Jordan on Sunday that he is pleased that Mullah Akhtar Mansour was killed in an American drone strike.

He said it puts the Taliban on "the horns of a dilemma" as they seek to establish new leadership to replace Mansour.

Votel was in Jordan to observe a U.S.-Jordanian military exercise, following a surprise visit to Syria on Saturday.

Afghan authorities have confirmed that the leader of the Taliban, Mullah Mohammed Akhtar Mansour, has been killed in a U.S. drone strike.

The National Directorate of Security, as the secret service is known, said in a statement that he was killed at 3:45 p.m. on Saturday. The statement, sent to The Associated Press on Sunday, says the attack took place in Baluchistan province, in southwestern Pakistan.

"The attack happened on the main road while he was in his vehicle," it says.

It referred to "others" in the vehicle without further detail

Earlier a senior Taliban commander told the AP that Mansour had been killed in the Noshki district, near the Afghanistan-Pakistan border.

However Kerry, speaking during a visit to Myanmar, repeatedly referred to Mansour in the past tense.

"Mansour posed a continuing imminent threat to U.S. personnel in Afghanistan, Afghan civilians, Afghan security forces and members of Resolute Support," Kerry said. "Peace is what we want. Mansour was a threat to that effort."

Kerry called for a post-Mansour Taliban to engage in serious peace negotiations with the Kabul government, saying, "It is time for Afghans to stop fighting and to start building a real future together."

A senior commander with the Afghan Taliban says the militant group's leader Mullah Akhtar Mansour has been killed in a U.S. drone strike.

He says the strike took place "in the Afghanistan-Pakistan border area."

The office of Afghan President Ashraf Ghani confirmed the strike but could not confirm Mansour's death.

Chief Executive Abdullah Abdullah, however, says that Mansour is "more than likely" dead.

Mansour formally led the Taliban after the death of the movement's founder, Mullah Mohammad Omar, was announced last summer.

Mansour, Mullah Omar's deputy, concealed Mullah Omar's death for more than two years, and ran the Taliban in his name until the death was revealed by the Afghan government.