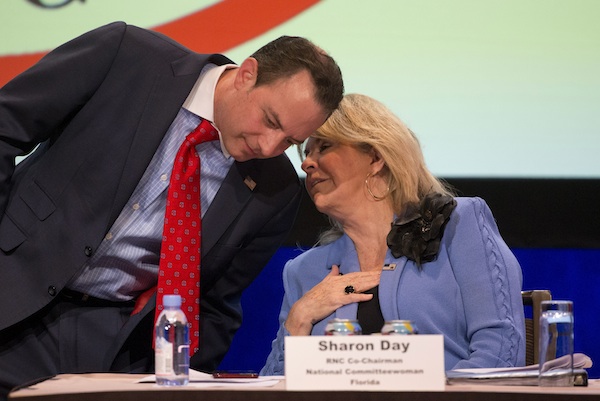 HOLLYWOOD, Fla. (AP) — So, it turns out you don't have to be nominated to become the Republican presidential nominee.

At least for now.

That's one rules oddity that became clear last week as the 168 members of the Republican National Committee and top party functionaries met in beachside splendor to discuss the GOP's messy search for a consensus presidential candidate. Three months from now, the 2,472 delegates to the party's nominating convention in Cleveland will have to decide whether to recast that or other bylaws that will help decide who becomes GOP standard-bearer in the November elections.

In a background briefing for reporters, GOP officials shed light on a curious anomaly.

Under current rules, the party conducts an initial roll call to formally place in nomination those vying to become the GOP presidential candidate. But you don't have to be among the competitors nominated to receive delegates' votes when the convention holds its next ballot — or ballots — to choose the party's actual nominee.

Of the GOP's existing 42 rules, the most discussed is 40(b). It says that to be among those nominated, candidates must submit certificates showing support by a majority of delegates from at least eight states.

Yet the aides also noted that there's another rule — 16(a)(2). It says that during voting to select a final nominee, the votes of delegates required by their states to support a specific candidate must be tallied for that person. GOP officials said that is true even if that candidate failed to be formally nominated in the initial roll call.

"Unbound" delegates — 150 to 200 in the first ballot, many more in later ballots — can also vote for whoever they want, whether that contender has been formally nominated or not.

Does this open the door for an outsider candidate elbowing aside frontrunners Donald Trump and Texas Sen. Ted Cruz and capturing the nomination? Perhaps.

It was approved at the 2012 convention, controlled by that year's candidate, Mitt Romney. The rule was aimed at preventing supporters of rival Ron Paul from sapping up valuable television time with a raucous nominating speech, a potential embarrassment to the front-runner.

WILL THE RULES CHANGE IN CLEVELAND?

Yes, and reshaping those conflicting nominating rules is one likely example.

The RNC will recommend rules changes just before the summer convention begins, but those are only suggestions. The rules in Cleveland will be whatever the delegates vote to approve.

Since most delegates will be committed to Trump and Cruz, those men will also have a major say in shaping the convention bylaws as their campaigns and others jockey for advantage.

Trump has repeatedly accused RNC Chairman Reince Priebus and other party leaders of running a nominating process with "rigged" rules. Since many party leaders consider Trump and Cruz likely losers in November, many grassroots Republicans — as well as backers of Trump and Cruz — suspect that leaders hope to allow a "white knight" candidate to ride away with the nomination.

For that scenario, a chief object of suspicion remains House Speaker Paul Ryan, a longtime friend of fellow Wisconsinite Priebus, despite Ryan's assertion that he won't accept the nomination.

Sensitive to that skepticism, party officials have repeatedly said they won't recommend any changes that would expose them to charges that they favor somebody. But at the same time, they admit changes are coming.

As Sean Cairncross, the party's chief operating officer, said in a video shown Friday to RNC members, "There's no reason why the rules that governed Romney's delegates should be used to govern you."

In this April 22, 2016, photo, Republican National Committee (RNC) Chairman Reince Priebus, left, speaks with Sharon Day, RNC co-chairman and National Committeewoman for Florida, during the general session of the Republican National Committee Spring Meeting, in Hollywood, Fla. In a background briefing for reporters, GOP officials shed light on a curious anomaly: Under current party rules, a candidate doesn’t have to be nominated in order to receive votes from delegates when the convention holds its roll call, or roll calls, for president.(AP Photo/Wilfredo Lee)

WHAT CHANGES DO THE CANDIDATES WANT?

If you were Trump or Cruz, you might love new rules that prevent the "white knight" scenario by making fresh nominations impossible. You might also want to free up delegates for former candidates like Florida Sen. Marco Rubio and Ben Carson to support you, instead of sticking with the candidate that state laws or party rules "bind" them to support.

Republicans say operatives for Trump, Cruz and Ohio Gov. John Kasich, another hopeful, are working at state conventions to win allies on the national convention's rules committee. That committee has 112 members, two delegates from each state and territory chosen by each state's delegation.

But there's a danger in pushing too hard and alienating GOP voters.

"You've got to play by the rules or it's going to be all-out war," said Dave Agema, the RNC committeeman from Michigan. "If they try anything, the perception will be, 'You're trying to change something for someone.'"

With conservatives like Agema up in arms over potential rules changes by the GOP establishment, that puts the presidential campaigns in an awkward position when it comes to speaking openly about any rules changes they might want.

"We trust the delegates," Jeff Roe, Cruz's campaign manager, told a reporter last week when asked about the rules changes he'd like.