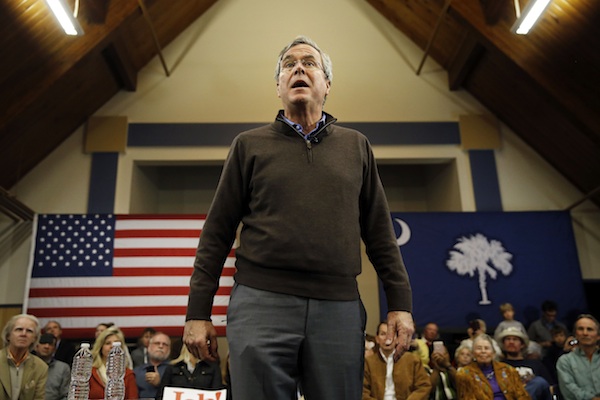 DENMARK, S.C. (AP) — The fight for black voters turned into a tug-of-war over President Barack Obama's legacy Friday as Democratic presidential hopefuls looked for an edge in South Carolina. Republicans, meanwhile, crisscrossed the state in search of a path out of Donald Trump's long shadow.

Hillary Clinton stepped up her hammering of rival Bernie Sanders for what she said are his false claims on Obama's legacy. Prominent black leaders echoed the theme — an effort to use the first African-American president as a wedge between Sanders and black voters.

"He has called the president weak, a disappointment," Clinton said of Sanders at a town hall Friday. "He does not support, the way I do, building on the progress the president has made."

Coming off a bruising rout in New Hampshire, the former secretary of state hopes the first-in-the-south primary will showcase her strength with at least one core segment of the Democratic coalition. A Democrat cannot win the nomination, much less the White House, without significant backing and enthusiasm from black communities.

For Republicans, South Carolina is another chance to emerge as the viable alternative to the billionaire reality-TV star who snatched the race away from the GOP establishment. Although Trump appears to have a solid lead in the polls in the state, the rest of the field is hoping to peel off support from the large and influential evangelical community.

As his rivals hustled through rare snowfall Friday, Trump showed he won't make it easy. He was able to steal the spotlight with a Twitter threat to sue his closest competitor.

"If @TedCruz doesn't clean up his act, stop cheating, & doing negative ads, I have standing to sue him for not being a natural born citizen," Trump wrote.

Another tweet questioned Cruz's faith: "How can Ted Cruz be an evangelical Christian when he lies so much and is so dishonest?"

Trump's broadside was a response to cutting new ads the Cruz campaign is airing in South Carolina.

One spot is set in a children's playroom. "Look, I've got the Trump action figure!" a boy says.

"What does he do?" another asks.

"He pretends to be a Republican."

(A Cruz attempt to go after Florida Sen. Marco Rubio abruptly ended when his campaign pulled the ad after learning it featured an actress known for her work on softcore pornography.)

Jeb Bush and his allies also are aiming attacks on the bomb-throwing front-runner — hoping his coarse style and record on social issues will turn voters off.

On Friday, Bush campaigned at a faith forum at conservative Bob Jones University in Greenville, where he mused about what his famous father, former President George H.W. Bush, would think of Trump's cursing.

"I can't imagine my dad ...," Jeb Bush said, trailing off as the audience laughed, imagining the former president cursing. "Yeah, 'not gonna do it.'"

Bush has embraced his family's network in the state. He's inviting his brother, former President George W. Bush, to campaign with him. On Friday, he picked up the endorsement of South Carolina's former first lady Iris Campbell, a longtime Bush family ally.

Trump was the only Republican to bypass South Carolina on Friday, redirecting his typically unconventional campaign to Florida, where he planned to hold a rally in Tampa.

On the Democratic side, Clinton's slams on Sanders were backed up by the Congressional Black Caucus PAC. Sanders wants to "undo" Obama's accomplishments, said PAC chairman Rep. Gregory Meeks, pointing to Sanders' past criticism of Obama and his 2011 suggestion that Democrats should mount a primary challenge to the president.

"I believe Senator Sanders' disparaging comments towards the president are misplaced, misguided, and do not give credit where credit is due," the New York Democrat said.

Sanders says he's been largely supportive of Obama, despite his occasional critique.

"Last I heard, a United States senator had the right to disagree with the president, including a president who has done such an extraordinary job," Sanders said in Thursday night's debate.

Clinton on Friday significantly bulked up her campaign advertising plan, reaching well beyond the next two states to vote with an eye on the March 1 "Super Tuesday" contests. She now plans to air ads in 17 additional states, including Texas, Minnesota and Georgia.

Yet her $27.7 million ad buy — which includes what's already been on the air — still falls a bit short of Sanders' spending on television and radio commercials, advertising tracker Kantar Media's CMAG shows. His $28.4 million ad buy is more concentrated, spanning six states in addition to upcoming Nevada and South Carolina.

Former Virginia Gov. Jim Gilmore ended his campaign after failing to win support. The Republican said he would support the party's nominee.

Associated Press writers Meg Kinnard and Bill Barrow in South Carolina and Julie Bykowicz and Julie Pace in Washington contributed to this report.