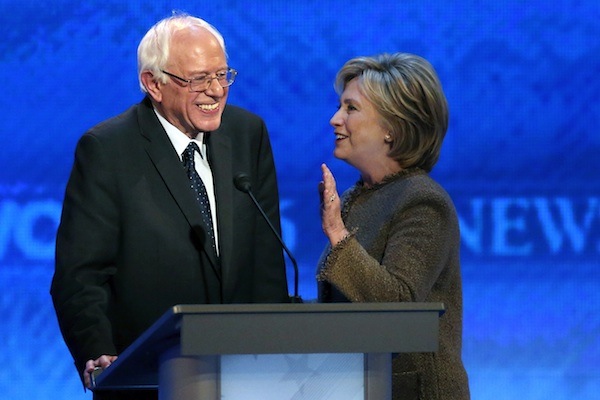 MANCHESTER, N.H. (AP) — The third Democratic presidential debate opened with an apology and ended with compliments.

For months, the Democratic primary contest has been a relatively civil affair — offering a tone that party leaders see as a much-needed contrast to the raucous Republican field.

A day after a rancorous dispute over a breach of private campaign data by Vermont Sen. Bernie Sanders' campaign roiled the Democratic Party, a political truce between Hillary Clinton and Sanders largely held — even as Sanders' aides seemed itching for a more aggressive confrontation with the front-runner.

"I apologize to Secretary Clinton," said Sanders. "This is not the type of campaign that we run."

Mindful of the grassroots support she'll need to fuel a general election bid should she capture the nomination, Clinton accepted his apology, instead, keeping her criticism carefully aimed at her GOP rivals — particularly businessman Donald Trump.

"I'm very clear that we have a distinct difference between those of us on this stage tonight and all of our Republican counterparts," she said, in her opening remarks. "We have to prevent the Republicans from rolling back the progress that we've made."

Clinton's brush-off of the data breach controversy underscores her confidence in a race in which Sanders is struggling to regain momentum as it shifts away from an economic message — the core of his campaign — to one over national security, because of terrorist attacks in Paris and San Bernardino, California.

Sanders' pledge to avoid personal attacks in favor of policy disputes has seemed to frustrate his aides at times, who have occasionally gone on the offensive on their own. Earlier this month, they pulled digital ads linking Clinton to Wall Street. Sanders also apologized earlier this year after his senior staffers publicly remarked that Clinton would make a good vice president.

The Sanders campaign's handling of the data breach this week emphasized the apparent disconnect between the candidate and his staff. His aides came out swinging on Friday after revelations that their staffers stole some of Clinton's voter data, using a clumsy response by the Democratic National Committee to charge party leaders with favoritism and insinuate that her campaign also lifted some of their information.

Sanders did not follow their lead. Instead, he chose to forgo the political opportunity, just as he did in the first debate when he dismissed controversy over Clinton's use of a private email server as secretary of state.

The apparent distance between Sanders and his aides may be designed to benefit their candidate by disassociating him from the kind of political tactics that could undermine his truth-telling reputation. But it also highlights the organizational challenges Sanders faces as he tries to turn an insurgent candidacy into a campaign that can topple a world famous political celebrity with a solid double-digit lead.

Clinton has moved quickly to capitalize on the new focus of the race, touting her experience as secretary of state and casting herself as an experienced hand in a dangerous world — an argument her aides believe will play well against both Sanders and non-establishment GOP contenders like Trump. She also tackled economic issues, emphasizing differences, not so much with her Democratic rivals, as with the GOP.

"Now, this is getting to be fun," said Sanders, after Clinton resisted efforts by the moderators to cut her off during a dispute over taxes.

Over the next six weeks, it will become clear if Democratic voters agree.

But while most polls have Clinton leading by more than 20 percentage points nationally, the contest remains tight in the crucial early voting states of Iowa and New Hampshire, the latter in which Sanders has an advantage as the longtime senator of neighboring Vermont. His aides believe that wins in those two states would give them momentum heading into the next contests in South Carolina and Nevada, territory where he's struggled to gain traction over the former first lady.

Sanders' campaign has successfully turned grassroots energy into a sizable war chest, announcing last week that it had received 2 million contributions — a milestone only matched by President Barack Obama in his re-election campaign. But to turn that level of early energy into a national victory, Sanders must find a way to expand his appeal in a race in which economic uncertainty is increasingly taking a back seat to security concerns.

Though there were moments of tension over national security in Saturday night's debate, Sanders failed to score a clear hit on Clinton.

On national security, he reiterated years-old criticism of her vote for the 2003 Iraq invasion, accusing her of being "too much into regime change."

Clinton quickly shot back: "With all due respect, Senator, you voted for regime change with respect to Libya."

Rather than drag out the confrontation when the instability in Libya came up again later in the debate, Sanders seemed to drop it. "The secretary is right. This is a terribly complicated issue," he said.

He ended his debate performance by congratulating Clinton, the wife of former President Bill Clinton, for doing "an outstanding job" as first lady.

"Let me tell you something about Bernie Sanders," senior adviser Tad Devine said after the debate. "I've worked for him for 20 years. There's no script. Bernie decides what he wants to do, what he wants to say."