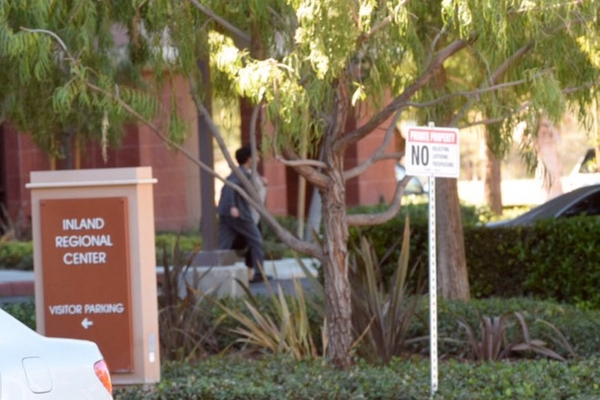 Several law enforcement agencies converged on the scene in San Bernardino and were searching for the suspects. Triage units were being set up in the area.

Some people were seen being wheeled away on gurneys after gunfire erupted at the Inland Regional Center. Others walked quickly from a building with their hands in the air and were searched by officers before being reunited with loved ones.

Initial reports said more than 20 were injured Police were working to secure the scene in the inland region about 60 miles east of Los Angeles, Sgt. Vicky Cervantes said. No arrests have been made.

Terry Petit said his daughter works at the center, and he got a text from her saying she was hiding in the building after hearing gunshots.

Petit choked back tears as he read the texts for reporters outside the center. He said she wrote: "People shot. In the office waiting for cops. Pray for us. I am locked in an office."

At a Shell gas station about a block from the shooting site, store manager Ana Fuentes said there was a flood of police activity in the area.

"There's maybe like 150 cops going toward Hospitality Lane," she said, as sirens echoed in the background.

She said she hadn't gotten any instructions to stay inside but that customers coming in told her about the shootings at Inland Regional Center.

The center says on its website that it provides social services to people with developmental disabilities.

The city of San Bernardino has struggled to rebound after declaring bankruptcy in 2012. The city of about 214,000 is in the two-county inland region that was hit hard by the Great Recession.

The area where the shooting occurred is along a main city road that fronts a city golf course and recreation center.

President Barack Obama has been brought up to date on the shooting at a Southern California social services center.

The White House says he was briefed by his homeland security adviser, Lisa Monaco, and has asked to be kept informed as the situation develops.

Authorities say multiple people were shot Wednesday at the Inland Regional Center in San Bernardino. Police were searching for one or more gunmen.

The president and CEO of the Southern California social services center where gunfire has erupted says the focus is on a building that houses at least 25 employees as well as a library and conference center.

Marybeth Feild of the Inland Regional Center says "the incident is in the conference area" that an outside group was renting Wednesday. She says she is not at the center, which serves people with developmental disabilities and does not know what outside group rented the center.

Feild says people served by the center also would have been in the building, which is in San Bernardino, about 60 miles east of Los Angeles.

Police confirm that people have died in the shooting at a Southern California social services center.

San Bernardino police Sgt. Vicki Cervantes told KCBS-TV on Wednesday that "there are multiple casualties and there are some confirmed fatalities." She says she doesn't have specific numbers.

She told the television station that it appears there was more than one shooter. She believes they were wearing "military-style" attire.

A hospital says it's received four patients in its trauma center after a shooting at a social services facility in Southern California.

Authorities say multiple people were shot and some were killed Wednesday at the Inland Regional Center in San Bernardino.

Police Sgt. Vicki Cervantes told KCBS-TV that police were searching for more than one gunman. She didn't have specific numbers on the number of dead and injured.

Gov. Jerry Brown's press office said on Twitter that the governor has been briefed and "is closely monitoring this disturbing and ongoing situation unfolding in San Bernardino.