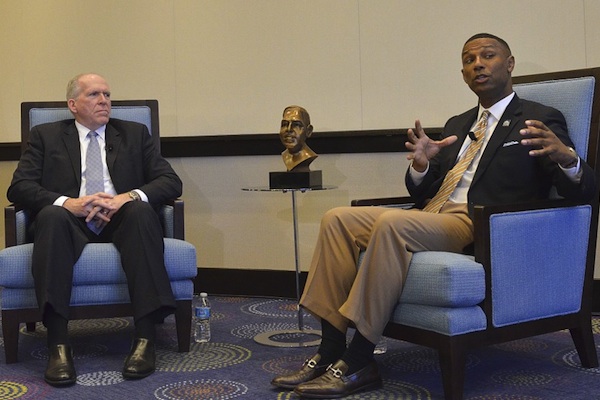 By Janelle Berry Special to the NNPA News Wire from the HU News Service
Published: 18 November 2015

WASHINGTON—The Central Intelligence Agency and a national organization that financially helps students at historically black colleges and universities (HBCU) announced during a press conference here Saturday they are working on a plan to increase the number of African American spies and analysts at the nation's foremost spying agency.

Johnny Taylor Jr., president of The Thurgood Marshall College Fund (TMCF), and CIA Director John Brennan said they had not worked out the details of the plan, but had agreed to make increasing the number of African Americans at the agency a priority.

There are not enough black agents at the CIA, Brennan said, and he hopes an allegiance with the fund and his Diversity & Inclusion Staff, where an African American woman is the chair, will begin to solve the problem
“What we need to do is make sure that we have the capabilities, the expertise; the individuals with the perspectives, and be able to bring those together and marry those perspectives so that we can provide those insights to our consumers,” Brennan said as part of the TMCF's three-day conference and gala.

“Inclusion and diversity are something that is the reflection, I think, of our mission, which is to make sure that we have the opportunity as well as the capability to provide to the president and others the deep rich insights that are necessary in order to advance in national security.”

The fund has supplied $250 million in funding to publicly-funded HBCUs since its inception in 1987, it says.
Brennan and Taylor said the plans are in the early stages.

“We had a kickoff meeting as far as the implementation team,” Brennan said. “There are a lot of teams throughout the agency that are joining together to do this, and we're going to have metrics on this.

“We need to measure our ability to make progress towards these goals. Nothing is a light switch. We're not going to be able to make this change overnight.”

Brennan said he would hold his senior managers accountable by spending more time addressing the issues of diversity at the CIA. The CIA must take the initiative to find these minority students who are qualified to join the CIA, he said.

As part of the process, Brennan said he wants to ensure that his senior managers are going to the colleges to recruit African-American candidates and that they are mentoring and sponsoring individuals within the CIA. Additionally, they should be coming up with ideas about how to realize their goals to increase diversity in leadership positions.
“It's easy for us to talk about these things,” he said. “You really have to be able to walk the talk, and we'll do that inside the building as well as outside.”

Taylor said the CIA will find that students at HBCUs are just as qualified and talented to work for the CIA as students from ivy leagues.

The Thurgood Marshall fund, which is named after the nation's first black U.S. Supreme Court justice, will act as a liaison by providing their names to the CIA, Taylor said.

“There are computer science engineer geniuses on these campuses that no one knew existed because they weren't at MIT,” he said. “They weren't at Stanford. That's our job to provide. We will play a role in introducing that diversity.”

Taylor said his organization will help by exposing black high school students to the CIA and its career opportunities, then introduce the needed CIA skill sets into high school curriculums. The organization will encourage high school students to attend college, and introduce them to the majors that the CIA is interested in to make them more desirable as applicants.
Students within the pipeline can choose to intern with the CIA and eventually begin a career at the CIA, Taylor said.

Taylor said his fund would continue to help black men and women get college educations, but it is also African American community's responsibility to ensure that young African Americans who are willing to learn and qualified are introduced to career opportunities.

“I have a saying that ‘Only us can save us',” he said. “The African American community has a responsibility to help some of these issues as well. My job and our job at the Thurgood Marshall College Fund is to ensure that organizations like the CIA know that there's incredibly talented source of really good students, ready to come working for their agency, if only they knew how to get there.”

Brennan said he asked former Urban League President Vernon Jordan, who used to work with former President Bill Clinton and is now a part of the CIA advisory board, to spearhead the effort to help his agency become more diverse.

“He came up with a very frank assessment of the problems that we have in terms of the way we recruit, develop, train, as well as groom individuals in order to assume those leadership positions in the agency,” he said.

Taylor encouraged the students at the press conference to go back to their respective colleges and universities and encourage other students to explore the opportunities at the CIA.

He also stated that while creating the pipeline for students in high school, the TMCF allows other organizations to attend career fairs at colleges that get overlooked such as Winston-Salem State University and the University of the District of Columbia, in order to allow college students to explore all the career opportunities available to them.

Kenisha Tillmutt, a senior at Fort Valley State University, and was positive about the CIA's efforts to include African Americans in the CIA workplace.

“It opened my eyes more,” Tullmutt said. “If he took the time out to come here and speak to us, I know he's serious about bridging the gap for diversity. I hope he lives up to his word.”

Abrahana James, a junior at Fort Valley State University, said she believes the CIA is trying to change.