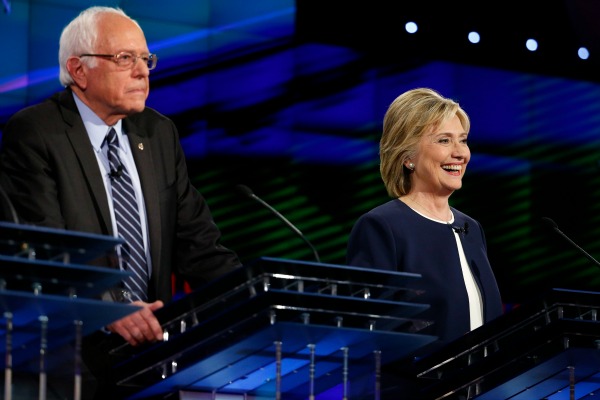 A day after aggressively defending her long public service record and contrasting it with that of Sanders, the Vermont senator who has excited the party's liberal base, Clinton remained in Nevada, talking to local media in the early voting state.

Sanders was scheduled to attend a taping of "The Ellen Degeneres Show," which has become a popular stop for presidential hopefuls.

Sanders has built an insurgent campaign that draws huge crowds — nearly always bigger than Clinton's — and boasts far more individual donors than the former secretary of state. But he's still introducing himself to voters nationally — a task made obvious Tuesday night as he had to explain his identity as a "democratic socialist" and decried the focus on Clinton's use of a private email server while serving as secretary of state.

But he made clear that he wasn't necessarily defending Clinton. Rather, he was bemoaning the attention the controversy takes away from other matters, particularly his focus on an uneven economy tilted to those already at the top.

"I think the American people want substantive debate on the issues affecting their families," he told CNN late Tuesday after the debate.

Clinton, meanwhile, already is widely known to the electorate, and she is working methodically not to repeat the mistakes of her 2008 campaign, when then-Sen. Barack Obama used an impressive nuts-and-bolts operation to overtake Clinton's favored campaign.

She defended her record on foreign affairs, including her 2003 vote to authorize the Iraq War — and issue that Obama successfully hammered her on in their primary battle. Clinton used the discussion to align herself with the president, who remains extremely popular among Democratic voters.

"After the (2008) election, he asked me to become secretary of state," she noted. "He valued my judgment, and I spent a lot of time with him in the Situation Room, going over some very difficult issues."

Sanders' campaign says that he raised more than $1.3 million since the start of the debate and that social media measures showed Sanders led Google searches and some Twitter metrics during and after the debate.

Former Michigan Gov. Jennifer Granholm, a Clinton backer who'd traveled to Las Vegas to watch the debate, could barely contain her glee Wednesday on MSNBC's "Morning Joe" as she assessed Clinton's performance. She called the debate the "best two hours of the campaign so far."

Even Republican presidential front-runner Donald Trump, who inserted himself into the debate coverage with live commentary on Twitter, said Wednesday that he felt Clinton had performed well.

Trump's campaign appeared to have settled on a new target — Sanders — releasing an online ad Wednesday that portrays the Vermont senator as too weak to lead.

After a series of scary-looking images including Islamic State militants, an announcer declares, "The world is a dangerous place. We need a tough, strong leader."

It then cuts video of Sanders being interrupted by Black Lives Matter protesters at an event, accompanies by circus music, as the announcer says, "And it's not this guy."

The exchanges between Sanders and Clinton sometimes left O'Malley, Lincoln Chafee and Jim Webb looking for room to talk.

"The two phrases I hear people say again and again are 'we need new leadership' and 'we need to get things done again,'" O'Malley said Wednesday, continuing his thinly veiled criticism of Clinton. He added that he "likes" and "respects" Clinton, but questioned whether her long ties to Wall Street and political financiers are what voters prefer.

"They want a president who is truly independent from those relationships of the past," he said.

Perhaps most important for Clinton, she left many observers wondering whether Biden still has an opening for a late entry into the race.

David Axelrod, an unaligned Democratic strategist who helped mastermind Obama's 2008 campaign, said on Wednesday Clinton emerged stronger with a "very self-assured, powerful performance" that should give Biden pause, while Sanders had a strong performance but still fell short of projecting the persona of a nominee. Sanders, he said, appears to be running to pull the party leftward.

This story has been corrected to show that Sanders' campaign says that he raised more than $1.3 million since the start of the debate, not $4 million.