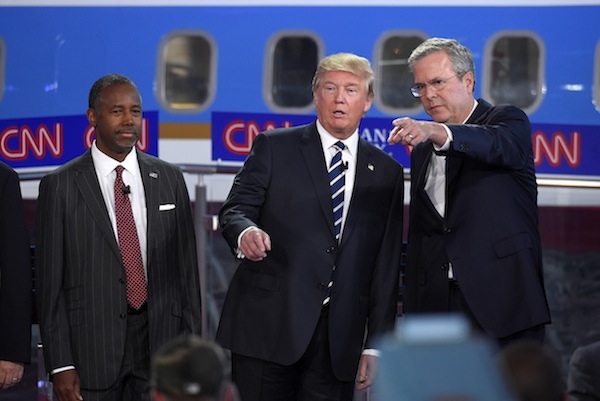 WASHINGTON (AP) — The Republican Party's conservative wing, pumped up by House Speaker John Boehner's stepping down, is warning the 2016 presidential candidates that defying its wishes will come at their peril.

Religious activists forcefully conveyed this message Saturday: embrace our uncompromising stance against abortion rights and gay marriage, among other priorities, even if doing so risks a federal government shutdown.

An emboldened conservative movement signals fresh trouble for White House candidates viewed by the party's frustrated base as insufficiently committed to their cause. Chief among them is former Florida Gov. Jeb Bush.

"Conservatives are on fire at the moment," said Gary Bauer, a former president of the Family Research Council. He was among the featured speakers at the Values Voter annual conference that brought an estimated 2,000 evangelical activists to Washington this weekend.

Boehner's announcement that he would resign from Congress by the end of October came without warning Friday, nearly four months before voting begins in the presidential primary. His decision revealed a deep divide within the GOP that raises questions about the party's ability to unite behind one candidate next spring.

Hard-line conservatives were deeply disappointed with the last two Republican presidential nominees — former Massachusetts Gov. Mitt Romney and Arizona Sen. John McCain. Boehner was unpopular among conservative activists, and his resignation will give them new hope that the party may choose a candidate who energizes the most passionate voters, even if that nominee is seen as less attractive to a general election crowd.

A co-founder of the tea party movement said Boehner was just another of the establishment figures taken down by frustrated conservatives. "Today, the insurgency is more emboldened than ever and looks to even further dominate the presidential elections in 2016," said Mark Meckler. "Our influence is growing."

In the crowded hallways of the Values Voter conference, 60-year-old Alvin Kaddatz said the turmoil on Capitol Hill sends a clear message to the presidential field. "They need to be listening to what the people are saying," said Kaddatz, who sells farm equipment in Hillsboro, Texas. "They need to follow through on their promises. And if they don't, elections have consequences."

It's unclear whether grass-roots conservatives can back up their tough talk.

But in an undeniably anti-establishment climate, the leading presidential contenders appear to be complying, for now.

Most support a tea party-backed measure to strip federal dollars from the women's health care provider Planned Parenthood as part of budget negotiations, even if such a move causes a partial government shutdown as early as this coming week.

Polls show a majority of voters oppose such brinkmanship over this issue. Republicans were largely blamed the last time government shutdown over funding for the Affordable Care Act, which lasted 16 days in 2013.

All those in the race want to strip the money from Planned Parenthood, but only a few want to do that without risking a shutdown. Put Bush and Ohio Gov. John Kasich in this category. That does little to help's Bush's standing with conservatives, already skeptical of his commitment to their principles.

Bush was a noticeable omission from the Values Voter speaking program. He cited a scheduling conflict.

Tony Perkins, president of the Family Research Council, which hosted the weekend conference, was surprised by Bush's absence.

"He needs to do well with this voting bloc," Perkins said of social conservatives. "Especially where he's at now in the polls. He needs all the help he can get."

Bush's team cited 14 public and private meetings with religious conservative leaders since April, suggesting that his absence from the Values Voter summit did not signal a lack of commitment to their priorities.

For Arlie Olsen, 64, who raises pigs in Blooming Prairie, Minnesota, Boehner's departure was "a good omen for where the country may be headed."

Olsen offered a message to his party's 2016 class: "It is going to be really hard for a candidate to win if they don't have the backing of this group."