Lynch Sworn in as Attorney General on Monday 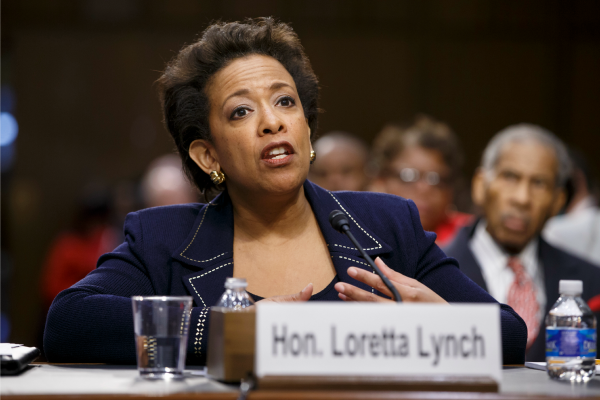 As attorney general Loretta Lynch assumes a portfolio that includes fighting terrorism, preventing cyberattacks and dealing with police and race — issues strikingly similar to what she's dealt with as top federal prosecutor for much of New York City and its eastern suburbs.

She inherits a Justice Department consumed by efforts to stop the flow of Islamic State recruits to Syria and prevent destructive computer crimes against American corporations. And she arrives with the department at the center of an ongoing national dialogue on relations between police and minority communities, something she pledged at her confirmation hearing to address.

The Senate's long-delayed confirmation on Thursday of Lynch, 55, makes her the first African-American woman to hold the position. Vice President Joe Biden will administer the oath of office to her on Monday at a Justice Department ceremony. She replaces Eric Holder and a six-year tenure in which he made civil rights protections a cornerstone priority.

Lynch will have limited time in the twilight of the Obama administration to craft ambitious new policy proposals and is seen as unlikely to depart in radical ways from Holder's priorities. But supporters expect her to bring her own understated and low-key management style, and she sought to assure anxious Republicans in recent months that she would arrive in Washington with her own law-and-order perspective.

"She's a professional prosecutor, a career law-enforcement person, and she's also someone who is apolitical," said Robert Giuffra, a New York lawyer who has known Lynch for years.

The workload itself won't be unfamiliar for Lynch, who since 2010 has been the U.S. Attorney for the Eastern District of New York, one of the busiest Justice Department offices in the country. The job has given her the opportunity to oversee cases against terrorists, cybercriminals and elected officials — all common Justice Department targets. Her office also is involved in the civil rights investigation arising from the death of a black Staten Island man who was placed in a chokehold by a white police officer.

In addition, she'll need to build relationships on Capitol Hill, where Republicans who criticized Holder as overly political repeatedly clashed with him and once held him in contempt.

"I think DoJ badly needs a new attorney general to start to reset relationships, first and foremost with members of Congress, the overseers," said Ron Hosko, former head of the FBI's criminal division and president of the Law Enforcement Legal Defense Fund. "I think that the negativity, the friction, between Holder and the oversight committees ultimately hurt" the department.

Never known as a publicity seeker, the Harvard-educated Lynch has kept an even lower profile in recent months while her nomination was in limbo, caught up in a partisan dispute over a human trafficking bill. Her office has recently brought several noteworthy cases against suspected Islamic State group recruits, but without the typical fanfare of a news conference. Her chief media spokesman retired last year and was never replaced.

As a Brooklyn prosecutor, she attracted attention for her leading role in one of the most sensational police brutality cases in city history, the 1997 broomstick torture of Haitian immigrant Abner Louima in a precinct bathroom. Even in that case, she encouraged a far more junior member of the trial team, Kenneth Thompson, to deliver opening statements rather than taking the opportunity herself.

"It shows that Loretta is more interested in doing justice than getting the limelight," said Thompson, now the Brooklyn district attorney.

She served from 1999 to 2001 as U.S. attorney for the Eastern District — which encompasses Brooklyn, Queens, Staten Island and Long Island — before entering private practice. She returned to the position in 2010 and was appointed to the Attorney General's Advisory Committee, a position that required her to spend more time in Washington and drew her closer to Holder.

During her second tenure, Lynch's office has won convictions in a thwarted al Qaida-sanctioned plot to attack New York City subways, and against a Canadian drug kingpin who was one of New York's biggest marijuana suppliers. More recently, her office brought a tax evasion case against former Republican Congressman Michael Grimm that resulted in his guilty plea and resignation.

Lynch is not expected to radically reshape the Justice Department in the remaining year and a half of the Obama administration, and at her confirmation hearing in January, she carefully endorsed some of the staples of Holder's legacy and spoke of the need to continue repairing bonds between law enforcement and minorities.

But in nuanced ways, she also created space between herself and the outgoing attorney general. She said the death penalty, which Holder personally opposes, was an effective punishment and voiced unequivocal opposition to the prospect of marijuana legalization.

It also remains to be seen how aggressively she will support Holder's efforts to transform the criminal justice system's treatment of nonviolent defendants.

Supporters expect her to bring not only her own perspective but also a unique biography that she says instilled in her the value of public service. She grew up in North Carolina at the height of the Civil Rights movement, the daughter of a librarian and a fourth-generation Baptist preacher who carried her on his shoulders as he opened his Greensboro church to protesters planning sit-ins and marches.

"If confirmed as attorney general," she told lawmakers in January, "I will be myself. I will be Loretta Lynch."