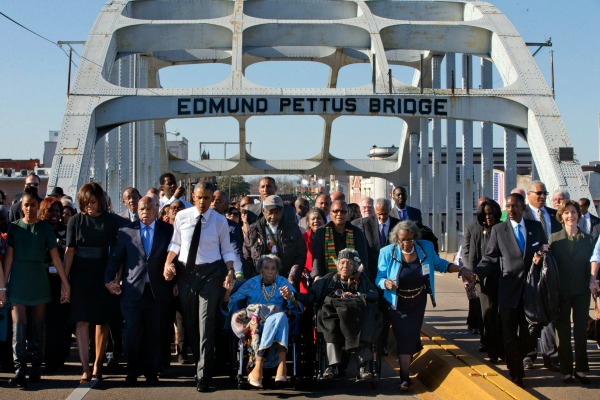 President Barack Obama, fourth from left, walks holding hands with Amelia Boynton Robinson, who was beaten during "Bloody Sunday," as they and the first family and others including Rep. John Lewis, D-Ga, left of Obama, walk across the Edmund Pettus Bridge in Selma, Ala,. for the 50th anniversary of the landmark event of the civil rights movement, Saturday, March 7, 2015. At far left is Sasha Obama and at far right is former first lady Laura Bush. Adelaide Sanford also sits in a wheelchair. (AP Photo/Jacquelyn Martin)

A march commemorating the historic "Bloody Sunday" demonstration was set to begin Monday afternoon after several speakers at the 50th anniversary commemoration pushed visitors to fight to restore the Voting Rights Act.

As thousands marched across the Edmund Pettus Bridge in Selma, Alabama on Sunday, some of the demonstrators who were attacked by law enforcement there 50 years ago said they fear the country is becoming a place where widespread minority voter suppression is once again tolerated.

The U.S Supreme Court in 2013 eliminated section 4 of the Voting Rights Act, which required states with histories of minority voter suppression to get permission from the Justice Department before changing voting laws.

"It's a slap in the face, an insult to all who have given their lives for righteousness sake," Willie White Harris, 70, of Selma, said after crossing the bridge once again Sunday. He was part of the 1965 march and said revisiting the bridge was bittersweet. "The struggle is just beginning really. We've got a long, long way to go. We've got to be vigilant."

The weeklong march retracing the steps demonstrators took in 1965 was expected to begin Monday in Selma, Alabama and culminate Friday with a rally at the state Capitol.

Police beat and tear-gassed marchers at the foot of the bridge in Selma on March 7, 1965, in an ugly spasm of violence that shocked the nation. The attack on demonstrators preceded the Selma-to-Montgomery march, which occurred two weeks later. Both helped build momentum for congressional approval of the Voting Rights Act later that year.

This week's march is the end of a series of events that brought tens of thousands of visitors to the city of roughly 20,000 that became a focal point of the civil rights movement after Bloody Sunday.

Those who gathered Sunday heard speeches from leaders including President Barack Obama and Georgia Rep. John Lewis — an Alabama native who was among the demonstrators attacked by law enforcement on the 1965 march.

Both gave rousing speeches on the work left to be done to achieve equality and Obama also touched on improvements in American race relations. The president mentioned recent high profile clashes between citizens and law enforcement on the circumstances leading to fatal police shootings and law enforcement tactics toward minorities.

"We just need to open our eyes, and ears, and hearts, to know that this nation's racial history still casts its long shadow upon us," Obama said. "We know the march is not yet over, the race is not yet won, and that reaching that blessed destination where we are judged by the content of our character requires admitting as much."

The president also addressed notions that the prejudice that characterized the civil rights era exists in more insidious forms today and little or nothing has changed since then.

"Ask the female CEO who once might have been assigned to the secretarial pool if nothing's changed. Ask your gay friend if it's easier to be out and proud in America now than it was 30 years ago. To deny this progress — our progress — would be to rob us of our own agency, our responsibility to do what we can to make America better," he said.

The anniversary included a tribute to the late President Lyndon Johnson, who signed the Voting Rights Act into law. Luci Baines Johnson accepted an award at a unity breakfast event on behalf of her father, saying it meant so much to see him honored.

"You remember how deeply Daddy cared about social justice and how hard he worked to make it happen," she told a crowd Sunday morning.

Many visited Selma with the goal of inspiring a younger generation to continue demanding equality and warning them of what they risk losing by becoming complacent.

William Baldwin, 69, of Montgomery, Alabama brought his two grandsons, ages 11 and 15, to the bridge Sunday to gain a firsthand understanding of the historic march he took part in a half century earlier.

"They're going to take this struggle on and we have to understand the price that was paid for them to have what they have now," said Baldwin, who was wearing an anniversary celebration t-shirt and a baseball cap with President Barack Obama's name embroidered in it. "It wasn't granted to them, it was earned by blood, sweat and tears."