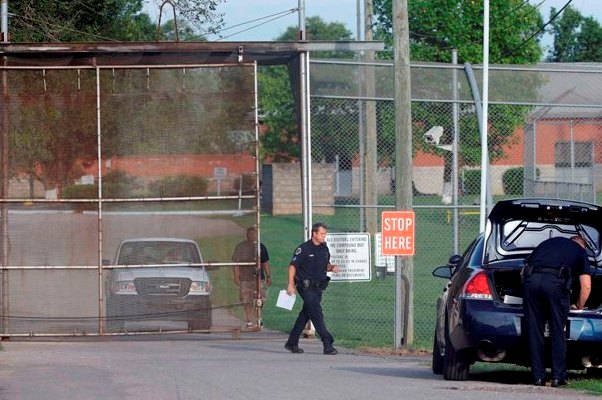 PHOTO: Police work in front of the Woodland Hills Youth Development Center Tuesday, Sept. 2, 2014, in Nashville, Tenn. Thirty-two teens escaped from a Nashville youth detention center by crawling through a weak spot in a fence late Monday, and more than half of them were still on the run Tuesday, a spokesman said. (AP Photo/Mark Humphrey)

NASHVILLE, Tenn. (AP) — At a Nashville detention center with a long history of violence, escape attempts and sexual-abuse allegations, more than two dozen teens broke out of a common area and created a large disturbance in the yard Wednesday night, roaming the area with sticks and spraying a fire extinguisher.

Late Wednesday night, about 24 teens — some of whom were part of the breakout — kicked out metal panels underneath the windows in a common area to reach the yard. This time, police formed a ring around the center's perimeter fence to try to prevent another escape, and none of them left the premises. The disturbance lasted about four hours, ending about 3 a.m., officials said.

Video shot by Nashville station WTVF showed teens chasing and assaulting a man who appeared to be a staff member. Photos in The Tennessean newspaper showed teens in the detention center yard carrying sticks. One showed someone spraying a fire extinguisher.

The Nashville Tennessean has a timeline of problems at the facility.

The facility was quiet later Thursday morning, and some staffers were seen leaving the facility.

Ten "ringleaders" of the incident were identified and brought to another detention center in Rutherford County to be questioned by officials, Tennessee Department of Children's Services spokesman Rob Johnson said. The rest were returned to their dorms.

"I think the staffers are worried," Johnson said. "I think their families are worried about them. And I think the neighborhood is worried. But I'm sure they're glad no one got seriously hurt."

Of the detainees, Johnson said: "I think they're deliberately trying to be disruptive. I'm sure they enjoy the attention."

Johnson told The Skanner News that corrections staff "who know these kids pretty well. They practically live with them," are investigating the incident. He declined to say whether the teens have specific grievances. He said outside investigators were talking to the teens and the department will release all information at an unspecified future time.

This week's incidents are the latest in a string of troubles for the facility, where most of the 14- to 19-year-olds have committed at least three felonies. The center saw a spike in assaults in 2012 after the state placed older teenagers there from a shuttered facility in eastern Tennessee. Between July and September that year, police had to be called at least 47 times for assistance, which surpassed total police visits for the previous two years combined.

Among the acts of violence listed in police records is a guard trapped in a headlock and repeatedly punched by a young man. Another assault involved four youths ambushing a staff member and beating him until he was rescued by colleagues.

In 2010, the U.S. Department of Justice ranked Woodland Hills as 13th in the country among juvenile facilities with reports of sexual abuse by staffers.

In a 2004 breakout attempt, more than a dozen teens armed with broom handles and hurling bricks injured 16 staffers before they were dispersed by police in riot gear.

On Monday night, teens left their rooms and kicked through the same metal panels used Wednesday before entering the yard and crawling under the fence. Officials had begun repairing and reinforcing the panels and will try to get concrete put at the bottom of the perimeter fence, Johnson said.

The teens at the center stay in single rooms that are locked on the outside. Only those with keys can enter. But the teens can push the doors open.

The Department of Children's Services will review that longstanding policy for all three of the state's juvenile detention centers, Commissioner Jim Henry said. It's difficult for staff to maintain control when the teens can open doors to enter common areas, he said.

The state Department of Corrections is sending engineering staff to the facility to see if any security enhancements are needed, Johnson said.

Nichole Sherman lives about a mile from the facility. Her two children and her grandparents live with her.

"It's kind of scary to wake up to helicopters flying over your house," she said. "Something major has to change. This is the second time in a week. That's ridiculous. And to be a parent, that's scary."